The excitement generated by retirement advice is (almost always) inversely proportional to how useful it is. Hearing a "secret" strategy no one knows about or a tip to "buy plastics" is powerful -- your heart starts to pump faster, and you act based on your emotions. 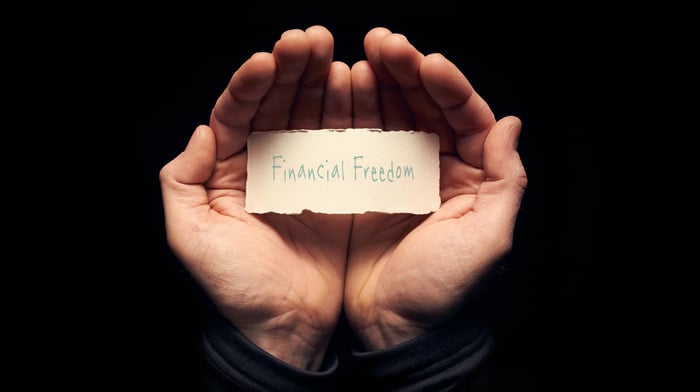 The motivation, however, fizzles very quickly, leaving you worse off than when you started.

That's why writing about retirement strategies is so frustrating: the solutions are simple, boring, and yet still difficult to follow through on. So I'll forgive you for rolling your eyes when I say: nothing is more important for retirement than your savings rate. That's pretty boring. Perhaps this analogy, and accompanying charts, will add some long-term incentives.

Many compare investing for retirement to running a marathon. On a lot of levels, the analogy fits. But some crucial tweaks are overlooked.

Imagine a new kind of marathon -- we'll call it Maraton 2.0. Instead of the standard 26.2 miles, the distance will be determined by your pace. Once the starting gun sounds, it's every man and woman for themselves.

In 2014, Dennis Kimetto of Kenya broke the marathon record with a pace of 4:41 per mile. At that rate, the total distance he would need to run in our special race would have been drastically reduced. Technically, he'd have finished Marathon 2.0 after just six miles -- in less than half an hour! 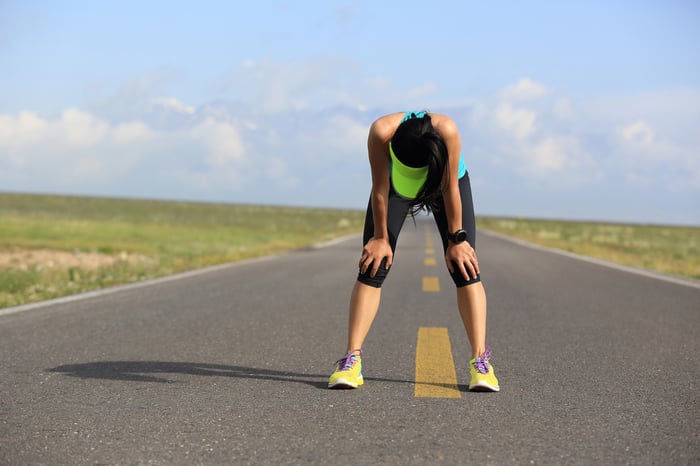 Your average American, on the other hand, would have had it much tougher. They might have been able to keep up a 10 minute pace for the first ten miles, but after that, things got ugly. With every mile logged over this threshold, more distance was added.

Sadly, most Americans would never finish Marathon 2.0 -- the demands are too great. It's a race they'll be in for the rest of their lives.

The real-life marathon to retirement

Whether this race is fair or not probably depends on your own physical fitness.

On the surface, it seems unfair to reward those who might be blessed with better genes and parents who encouraged long-distance running. It also seems cruel to condemn those who might need more help to a lifetime of running with no end in sight.

And yet this is exactly how preparing for retirement works.

But there's one key -- and unexpected -- twist that I cannot emphasize enough:

In other words, it is a function of your savings rate.

As you save and invest more and more of your money, you're not only putting away a bigger chunk of change, but you're also lowering how much you need to retire and keep the same lifestyle. That double-whammy is incredibly powerful.

That's why a guy named Pete who lives in Colorado was able to retire -- free and clear -- at the age of 30, without ever earning a million-dollar paycheck. It's also why our student-debt situation in the country is so concerning, and why a culture of conspicuous consumption can be so troublesome.

Here's what that difference looks like: In this first chart, we have Sarah's household, which brings in a combined $75,000 per year, of which 10% is dutifully put into retirement savings. Using the 4% rule to help determine how much she'll need to retire, here's how long it will take for her to reach her goal. 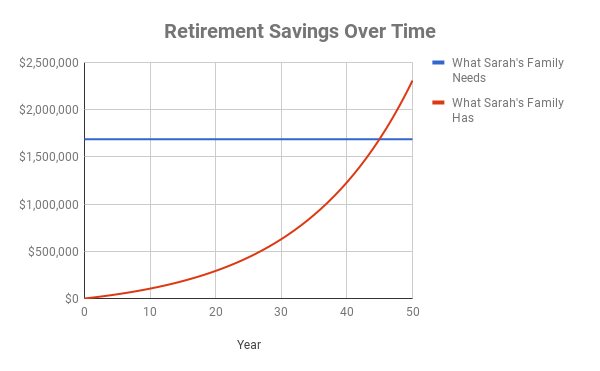 Now let's take a look at Molly's household. Like Sarah, they bring in a combined $75,000. But they've decided to find where their level of "enough" is and stick to it. That means they decided to live in a smaller house in a walkable neighborhood, and only had one car. The family cooked their own meals most nights, and didn't take fancy vacations

As a result, they were able to put away 30% of their pay toward retirement. Here's what their "marathon" looked like. 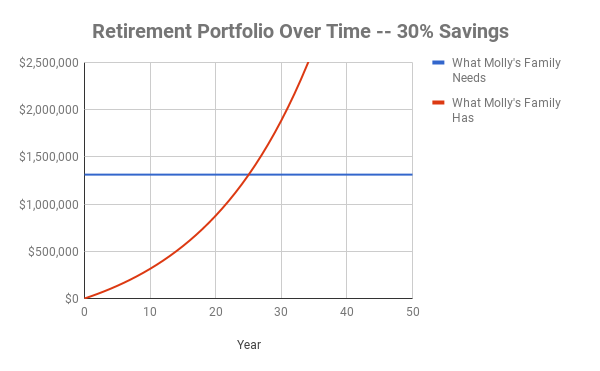 You'll notice that the red line disappears right off the page. That's because I wanted to keep the scale the same. Molly's savings went up much faster, and her finish line was much lower. That's why her family reached financial independence in just 26 years, compared to the 45 years of slogging away that Sarah's family had.

Don't lose sight of the forest for the trees here.

Yes, there are lots of variables at play here. I assumed inflation-adjusted returns of 6% per year, and income staying stable over time. I assumed that each family would "need" the same level of spending in retirement. I didn't include Social Security, pensions, or any other form of income in the equations. Those are all important in real life, and utterly unimportant for what I'm trying to show.

By saving more, not only does the red line grow faster, but the blue line goes down. The real-life implications are enormous. While you and I might not have 100% control over our savings rates, there's probably more agency there than we often admit to ourselves.

So start sprinting now. The race started the day you were born. And if you don't get going, it may last far longer than you'd like it to.