It's the most wonderful time of the year. No, not that time, when stores are lined with snowflakes and tinsel, but rather, that period when the bulk of Americans eagerly await cash back from the IRS.

Though tax season is almost at an end, tax refund season is just picking up, and if this year is anything like years prior, roughly 80% of filers will get some sort of money back once their returns are processed. But whether they'll use that money wisely is a different story.

In fact, it's pretty disturbing to learn that 16% of millennial filers plan to spend their tax refunds on consumer products, while 14% say they'll spend that cash on a big ticket item, according to data from Principal Financial. Given that many younger workers are lacking in savings, they shouldn't be so quick to spend their refunds. Yet many will ultimately do so anyway due to a glaring misconception about what tax refunds actually entail. 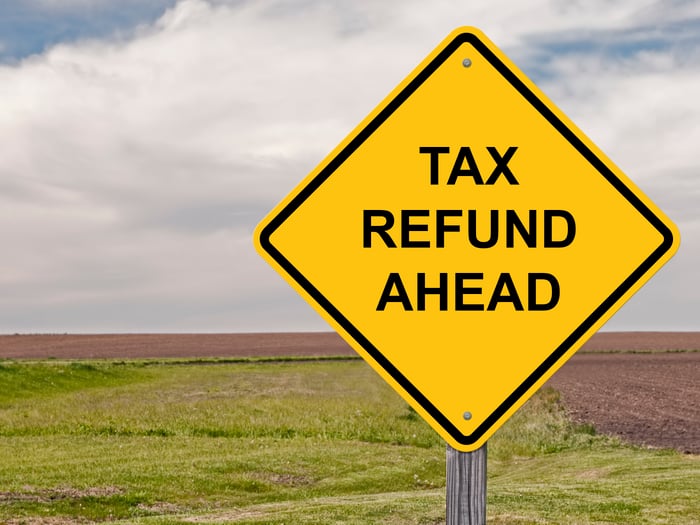 In 2017, the average American's tax refund was estimated at $2,763, and there's a good chance that this year's typical refund will be close to that figure. But that's not a sum younger workers can afford to blow. GOBankingRates reported last year that 46% of millennials age 18 to 24 have no money in savings, and the same holds true for 41% of those between the ages of 25 and 34. If you're one of them, you should absolutely be using that money to build an emergency fund so that the next time an unplanned bill comes your way that your paycheck can't cover, you're not immediately forced into debt.

Even if you're doing well on emergency savings, there are still plenty of ways you can use your tax refund responsibly -- such as funding your IRA or 401(k). But countless Americans will instead be tempted to spend their refunds frivolously because they consider that cash free money.

So let's be clear; Your tax refund is not free money. Rather, it's your money that you lent to the government over the course of a year for nothing in return.

The problem with our tax system is that it's on you, as a taxpayer, to estimate how much of your earnings you should be withholding. Of course, there's a neat little form called a W-4 that's designed to help you pinpoint that amount, but its effectiveness is limited. In fact, most Americans wind up withholding too much tax during the year, which is why they end up with refunds. But if those same people were to collect that money all along, they'd perhaps use it to pad their savings, fund their nest eggs, or cover their basic bills without having to resort to debt.

So rather than look at your refund as found money that ought to be spent, consider it a portion of your paycheck that was mistakenly withheld when it should've been given to you all along. Does that change the picture? It should.

Nip those refunds in the bud

If you're used to getting a refund but would rather collect the money you earn as you earn it, here's a fix: Adjust your withholding to have less tax taken out of each paycheck month after month, and arrange for whatever boost you receive to be sent automatically into a savings account. Then, leave that money alone until you file your next tax return. If it turns out you underpaid and owe the IRS money, you dip into that account and pay your tax bill. If not, you leave that money in savings if your emergency fund isn't complete. If it is, you take most of it to fund your retirement plan, and use a small portion of it on something fun. Sound reasonable?

As far as this year's tax refund goes, resist the urge to buy something needless if your savings aren't where they should be. It's one thing to use a gift or bonus for instant gratification, but clearly, your tax refund is anything but.