Please ensure Javascript is enabled for purposes of website accessibility
Log In Help Join The Motley Fool
Free Article Join Over 1 Million Premium Members And Get More In-Depth Stock Guidance and Research
By Maurie Backman – May 25, 2018 at 4:47PM

Are you making the same mistake without even realizing it?

There's a reason so many 50-somethings are worried about the prospect of retiring. One-third of adults 55 and over have less than $10,000 saved for the future, which means they're running out of time to build their nest eggs. And while there are a number of reasons why older workers struggle to save, for some adults in their 50s, it could boil down to being too generous with their money.

In a recent report by the Federal Reserve Board, 23% of adults in their 50s say they provide financial support to individuals living outside their homes -- such as their grown children. But that's a mistake that could end up costing them big time. 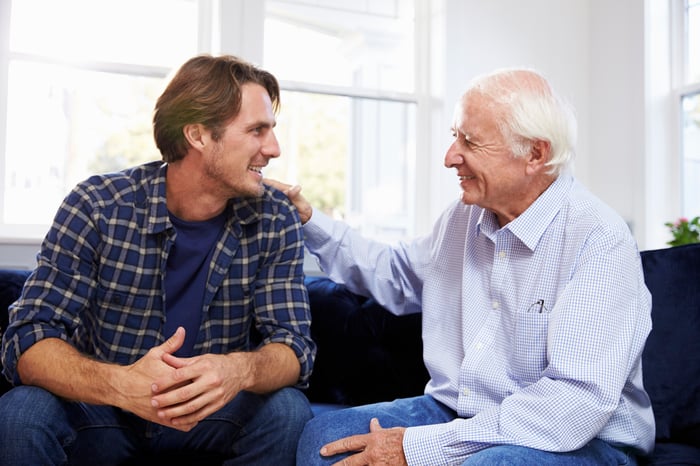 Can you afford to support your adult kids?

Let's be clear: It's noble to want to help your grown children stay on top of their bills and send their own kids to college. And if you have loads of extra money lying around, then by all means, go for it.

The problem, however, is that most Americans are on shaky ground financially. Retirement savings aside, an estimated 70% of older workers have $5,000 or less in emergency savings, which is far below the three to six months' worth of living expenses we're advised to stick in the bank. Throw in the fact that many 50-somethings have virtually no money socked away for their golden years, and we're looking at one increasingly dangerous trend.

How might supporting your adult children or other family members impact your future? Imagine you're currently behind on savings but are still giving away $200 a month to help your grown kids. If you were to save that money for the next 10 years instead and invest it at an average annual 7% return, you'd boost your nest egg by $33,000 -- which is a lot of money when you're behind on savings. And that sort of sum could spell the difference between handling a major expense in retirement or racking up a sizable load of credit card debt instead.

Your 50s are a pivotal time to boost your savings rate and start paying down debt (such as your mortgage) so that you don't carry it with you into retirement. But if you give away too much of your money, you're going to lose out.

In fact, let's talk about retirement savings for a minute, because 50-somethings, as a whole, have much work to do in this regard. The average adult aged 50 to 55 has $124,831 set aside for the future, while the average 56- to 59-year-old has $163,577. And while those sums might seem impressive at first glance, they're actually not very much when we think about what they mean in terms of annual income.

If we apply a 4% annual withdrawal rate, which is what many financial experts advise, folks aged 50 to 55 get just under $5,000 of income per year out of their nest eggs. Adults 56 to 59, meanwhile, get a little over $6,500. Neither figure is particularly encouraging, even when we factor Social Security into the mix.

And that's why, if you're in your 50s, you should be focusing on building your nest egg and meeting other financial objectives before giving your money away. It's nice to be generous, but if you're supporting your adult children in any way, remember that they still have many years ahead to save for their own retirement, whereas your own opportunity is rapidly dwindling. And that's reason enough to be a little more selfish with your money -- if we even want to call it that.