Getting married is a major milestone, and a potentially expensive one at that. The average U.S. wedding now costs an almost absurd $33,391, and in major cities, like New York, that figure is close to $77,000. Yowza.

Of course, there are lots of good reasons not to spend a fortune on a one-day event. Most Americans are behind on savings, with 40% lacking the funds to cover a mere $400 emergency. But finances aside, here's another compelling reason to keep your wedding budget to a minimum: It might help stave off divorce. 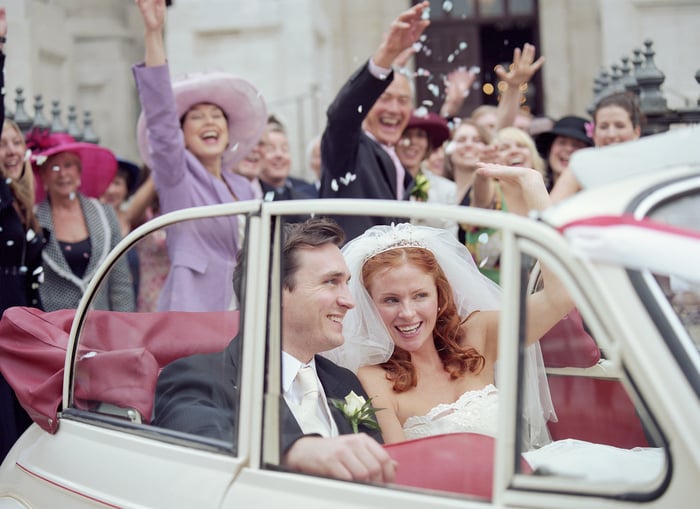 According to research by economics professors Andrew Francis-Tan and Hugo M Mialon, having a less expensive wedding correlates to a stronger likelihood of having a marriage last. Specifically, couples whose weddings cost less than $1,000 are less likely to get divorced than those who spend more, while couples whose weddings cost over $20,000 are more likely to see their marriages dissolve.

Now this isn't to say that having a cheaper wedding guarantees long-term happiness. Clearly, there are many factors that dictate whether a couple ultimately ends up getting divorced. Still, it's only one of many good reasons to keep your wedding costs to a minimum.

A better use for that money

Tempting as it may be to spend a ton of money on your dream wedding, before you do so, think about what you might be sacrificing for a one-day affair. As mentioned above, most Americans don't have a fully loaded emergency fund with six months' worth of living expenses. If you're one of them, then the $33,000 and change you might otherwise spend on a wedding could instead buy you peace of mind in the face of life's unknowns.

Then there's retirement to think about. Imagine that instead of spending $33,391 on a wedding, you spend one-third of that amount and invest the rest over a 30-year period. If your portfolio generates an average annual 7% return during that time, you'll be sitting on $169,000 after three decades, which will go a long way during your golden years.

Another option? Use that money to pay off your student loans, assuming you're still carrying them. Or, apply it to your existing credit card balance and break free from that debt.

Finally, you might consider spending less on a wedding and saving that money to buy your first home. Younger American adults these days are waiting longer than ever to buy property, and much of that trend boils down to not being financially prepared. So if you're sitting on a chunk of wedding money, think about whether you'd rather have a big party or a place to call your own.

Now none of this is meant to imply that you can't splurge a little on your wedding. If you have the funds and want a formal affair, go for it. But you don't need to go crazy, either. Rather than pay a premium for every little detail, decide which ones are most important to you and spend your money there. For example, if you're a foodie, spring for a high-end caterer, but skip the flowers and ask a friend to take pictures rather than hire a photographer.

One more thing: If you are going to ignore this advice and spend a boatload of money on your wedding, be sure not to rack up debt in the process. An estimated 74% of couples who are planning to tie the knot by the end of the year anticipate taking on debt in the process, and that's a mistake that can not only strain their finances but their marriages on a whole.