But whether they should be is a different story.

The 2018 tax overhaul left many working Americans wondering whether the associated changes would benefit them or hurt them. Data from the National Endowment for Financial Education indicates that on the tax-filing front this year, Americans are reasonably satisfied.

Of the 74% of U.S. adults who have submitted a tax return so far, 42% say they're happy with the outcome. Meanwhile, an additional 25% are neutral on the matter, while 33% are unhappy.

Furthermore, while about 73% of those who submitted their tax returns received a refund, a good 21% wound up owing taxes to the IRS. And surprisingly, 5% of filers supposedly broke even. 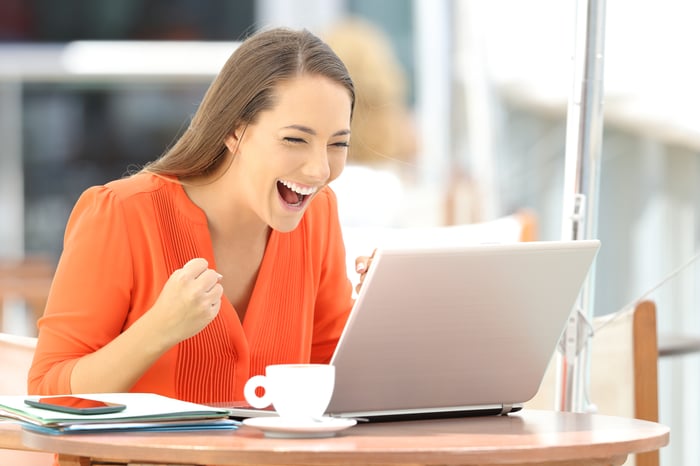 When we hear about filers being happy with their tax returns, it's usually because there's some sort of refund at play. The funny thing, however, is that while many of us are wired to believe that a tax refund is a positive financial event, it actually isn't. And the sooner more people realize that the more their perceptions about the filing process might change.

Do you really want a tax refund?

Owing money to the IRS during tax season usually isn't something to celebrate, especially if you aren't financially prepared for that possibility. But getting a refund isn't necessarily a great thing, either. When you get a refund, it means that you overpaid your taxes during the year and gave the government an interest-free loan for nothing in return. On the other hand, when you owe money, it means that you got access to that cash along the way and that you're being asked to pay that overage back.

Of course, the ideal situation when filing taxes is to break even, but doing so is generally pretty difficult. That's because there's no perfect system for withholding taxes from income. Employers follow IRS-issued guidelines, and filers claim allowances on their W-4 forms based on their financial circumstances in the hopes that the stars align. But outside factors could easily create a scenario in which a filer withholds the proper amount from his or her paycheck yet owes money or gets a refund anyway.

Imagine, for example, that you're single and claim an allowance for yourself on your W-4. Your employer, in turn, will follow the IRS's guidelines in withholding the right amount of tax from your earnings. But what if you also make $3,000 in investment income and another $2,000 in income from a freelance gig on the side? Suddenly, that's $5,000 you aren't paying taxes on as you go, which means that when you sit down to file your return, you're going to need to account for that income.

The opposite scenario might also hold true. You might have the right amount of tax withheld from your paychecks but then claim enough deductions to create a situation in which the IRS owes you money.

The point, either way, is that while breaking even is hard to do on the tax front, it's what you should be aiming for. And the closer you get to breaking even, the happier you should be about your taxes. Furthermore, if you didn't come close to breaking even this year, consider adjusting your withholding for the remainder of 2019 to get closer to that mark. This way, you'll be more likely to walk away satisfied come this time next year.