The nation's retirement savers are getting richer, with the number of people holding $1 million or more in their 401(k) accounts rising last year.

According to new data from Fidelity Investments, 233,000 employees ended the fourth quarter with $1 million in their accounts, up from 200,000 in the third quarter of 2019. The number of IRA millionaires reached a record 208,000, driven by millennial investors. A decade ago, only 21,000 Fidelity 401 (k) account holders were part of the millionaire club.

Without a doubt, the decade-long bull run in the stock market has a lot to do with the newfound riches of employees across the country. The S&P 500 ended 2019 up 28.9%, while the Dow Jones Industrial was 22.3% higher. All signs point to more of the same in the early part of 2020, with many stocks surging, setting record highs and amassing huge market valuations.

But the strong showing out of the stock market isn't the only reason there are more 401(k) millionaires. These millionaires are also employing smart retirement savings strategies that are boosting their overall balances.

Fidelity found the average 401(k) balance increased 7% quarter-over-quarter and 17% on a year-over-year basis. Employees are saving more of their salaries, putting away a record 8.9% in the fourth quarter. Add employer contributions to the mix, and the savings as a percentage of income increased to 13.5% on average. 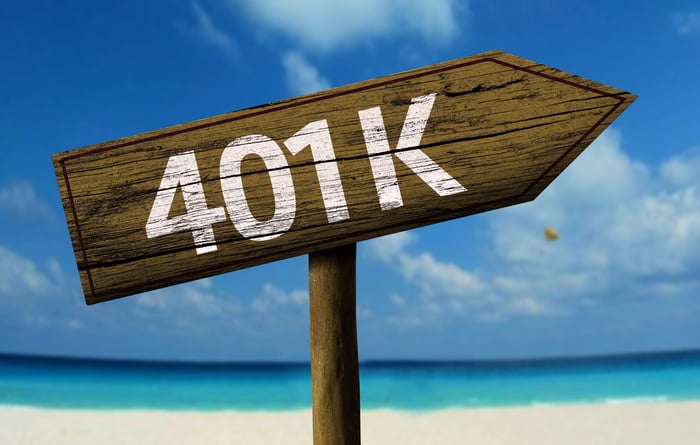 Workers across America are increasingly taking steps to boost their rate of savings, but employers are also making it easier. They understand that if savings is done automatically without the need for human intervention, employees are more apt to partake, which Fidelity's results proved true.

Of those that increased their savings during 2019, Fidelity found that 40% did it proactively, while 60% benefited from an automatic increase through a company-sponsored program.

The employers are also automatically increasing contributions for employees at a rising rate. In the fourth quarter of 2019, 19% of companies offered automatic contribution increases compared to 9% in 2009.

The automatic increase rate is currently capped at 10%, but with the passage of the SECURE Act, that soon increases. Signed into law in late December, the SECURE Act aims to make it easier to save for retirement by eliminating the maximum age for traditional IRA contributions, allowing part-time workers to participate in a 401(k) plan, and enabling companies to withdraw up to 15% of a worker's pay automatically into a savings account, among other things.

Stay in it to win it

Building a $1 million nest egg doesn't happen overnight. It takes time and patience. The longer you stay committed to saving for retirement, the more you'll amass.

At least, that's the case for Fidelity's 401(k) and IRA account holders. Those that remained in their 401(k) plan for 10 straight years saw their balances increase to record levels in the fourth quarter.

For good reason, they not only benefited from the continuous run-up in stocks, but the positive effects of compounding. That occurs when you earn interest on your investment and on the interest. If you invested $1,000 and earned 5% in the stock market, after 10 years it would be worth $1,648. After 30 years, it would stand at $4,469 all because of compounding.

For long-term savers, the average balance in Fidelity retirement accounts hit $328,200 in the fourth quarter, up from the previous record $306,500 set in the third quarter. Female investors saw balances jump 21% from last year, reaching a new high.

The last decade has taught investors why they need to save often and consistently. Of equal importance is ensuring your 401(k) account is diversified with the right mix of stocks, bonds, and cash, taking into account your risk tolerance and investment horizon. It's particularly true in the current economic environment, where fears of a recession are rising, uncertainty reigns ahead of the 2020 presidential election, and a worsening coronavirus is spooking investors.

Even with all that in the background, amassing $1 million in your 401(k) doesn't have to be just a pipe dream. It takes all of the above to join the ranks of America's 401(k) millionaires.

A Record Number of 401(k) Holders Are Now Millionaires: Here’s How To Join The Ranks @themotleyfool #stocks Next Article
Current