When you need money in a pinch, tapping your retirement savings may seem like a reasonable option if you don't have cash in the bank for emergencies. That way, you don't have to rack up credit card debt or go through the hassle of applying for a loan (and possibly getting rejected).

But while you are, in many cases, allowed to borrow money from a 401(k), there's no such thing as an IRA loan. As such, if you have all of your savings in an IRA, you may be out of luck -- that is, unless your need for money is truly temporary. If that's the case, there is one option you can pursue, but it's not without risk.

How to borrow from your IRA

The IRS offers huge tax breaks for funding an IRA. In exchange, it expects savers to leave their money alone until they reach retirement. As such, if you take an IRA distribution before reaching age 59 1/2, you'll be hit with a 10% early withdrawal penalty on the amount of money you remove from your account. Ouch.

That said, there is a way to access your IRA funds on a short-term basis without incurring a penalty, and it's called an indirect rollover. 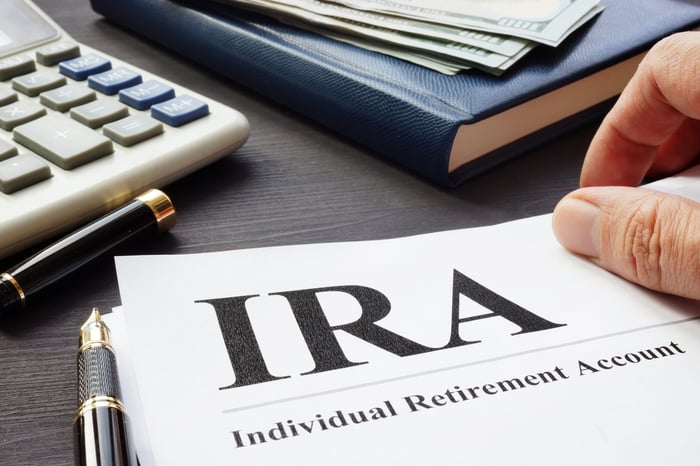 IRA rollovers are common. For example, you might choose to close out one retirement account and roll your funds directly into a new one with lower fees or better service. When that happens, your money will go from one IRA to another -- you won't see that money yourself at any point.

But that's not the only way to move IRA funds around. You can also do an indirect rollover, where you get a check for the value of your IRA, and you're responsible for depositing that money into a new IRA within 60 days. If you stick to that window, you won't be hit with a penalty. And that's where the option to borrow from an IRA comes into play.

If you need money and know you'll be able to pay it back within 60 days, you can initiate a rollover, use that money temporarily, and then pay it back to avoid a penalty. And, you don't have to take that sum and deposit it into a new IRA. Rather, you're allowed to stick it back into your existing IRA.

Now, this strategy is not without risk. If you don't get that money deposited into a new IRA or your old IRA within that 60-day time frame, the amount removed will be treated as a distribution, which means it will be subject to the 10% early withdrawal penalty discussed earlier. But if your need for money is very short term (say, you're self-employed, have a huge bill to cover, and are awaiting a payment for a major project that's coming within a month), using an indirect IRA rollover as a loan could work.

Of course, generally speaking, your IRA should not take the place of an actual emergency fund. That's because borrowing from it via an indirect rollover is risky, and also because you're allowed only one IRA rollover per year-long period. But if you're really in a pinch, and you're convinced you can get that money paid back to your IRA within 60 days, then borrowing via an indirect rollover is a reasonable solution.