You'll often hear that retirement is a less expensive period of life than your working years, and there may be some truth to that. Once you retire, you won't have to pay to commute to a job, and you may even be able to get rid of a car if you don't have to travel to an office daily. Also, many seniors manage to pay off their homes before they retire, so that's one less expense to contend with.

But just because your living expenses may decline in retirement doesn't mean they'll drop all that drastically. You'll still need to pay to maintain your home, put food on the table, and cover the cost of utilities. You'll also have to spend money on healthcare, which may not be as affordable as you'd think under Medicare.

That's why it's important to enter retirement with a healthy level of savings. While you can expect some income from Social Security, those benefits generally won't be enough to cover your living expenses in full. But unfortunately, many of today's seniors are relying heavily on Social Security, and as a result, they're living on very little. 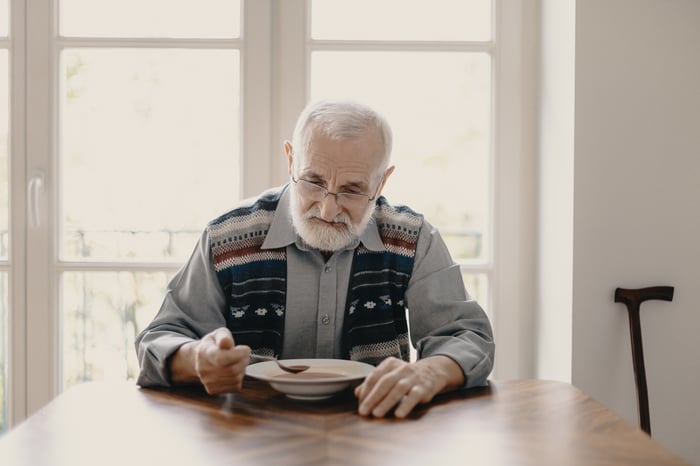 The median annual household income among retirees today is just $29,000, according to a recent Transamerica survey. Given that the average individual Social Security benefit today is only about $1,500 a month, or $18,000 a year, that's not shocking. But it also means that a lot of seniors are no doubt struggling financially, and if you'd rather not land in a similar boat, you'll need to be prepared to save aggressively.

What do you want your retirement to look like?

It's quite possible to live frugally in retirement. Maybe you'll downsize your home, do all of your own cooking, and spend your days gardening and spending time with your grandchildren rather than traveling. But you'll still need money to cover your expenses comfortably without having to penny pinch on a daily basis, and to that end, Social Security generally won't be enough. In fact, if you want to retire with an annual income that's more generous than $29,000, you'll need to be prepared to build a solid nest egg of your own.

How can you pull that off? It's simple: Open an IRA or sign up for your employer's 401(k) from an early age, and then contribute to that retirement plan consistently during your career. At the same time, be prepared to invest your savings heavily in stocks, which have historically delivered much higher returns than bonds.

In fact, let's say you're 30 years old and want to retire at age 65. Let's also assume your invested savings generate an average annual 7% return, which is a few percentage points below the stock market's average. Here's what your savings could grow to, depending on your monthly contribution:

What do the above numbers mean? Many financial experts recommend withdrawing from your retirement savings at an annual rate of 4%. Now, say you managed to sock away $200 a month for 35 years and save $332,000 in time for retirement. At a withdrawal rate of 4% a year, you're looking at about $13,300. Add that to your Social Security benefits (which will total about $18,000 if you're like the average senior today), and you're already at over $31,000, which is higher than the median annual retirement income today.

If $29,000 a year doesn't sound like much to live on, don't create a scenario where that's all you have available. Instead, make an effort to save independently to enjoy a retirement free of financial worries.