At a time when so many seniors can't afford to pay more for healthcare, that's a very good thing.

If there's one expense that tends to increase for seniors from one year to the next, it's healthcare, and that extends to Medicare. While Medicare Part A, which covers hospital care, is free for most enrollees, Part B, which covers outpatient services, charges a monthly premium that changes annually. Currently, the standard monthly Part B premium is $144.60, though higher earners pay more. But there's a chance those premiums could rise come 2021.

That's bad news for seniors, because any Part B premium increase could eat into their income or Social Security benefits. While an official Social Security raise won't be announced until later in the month, initial estimates are calling for a 1.3% cost-of-living adjustment (COLA), which is better than the nonexistent COLA some were predicting early in the year, but not a huge increase either.

Back in April, the Medicare trustees predicted that the standard Part B premium would jump to $153.30 in 2021, representing a 6%, or $8.70, monthly increase. But those estimates didn't take the coronavirus crisis into account. The extent to which Part B premiums go up depends on a specific formula that takes different costs into consideration. Calculating that increase will be tricky this year, since Medicare spent more on treating coronavirus patients, but also spent less due to seniors delaying preventive care. 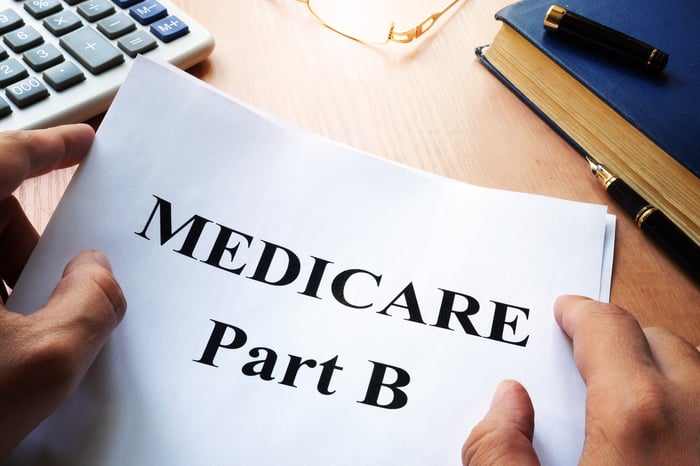 But either way, lawmakers don't want to take chances, and so they've proposed a bill seeking to cap Medicare Part B premiums next year. If this measure passes, any increase to the standard Part B premium would be capped at 25% of what it otherwise would've been for 2021. And that alone should give seniors a reason to breathe easier.

Seniors on Social Security have long struggled to keep up with their living expenses, since those benefits have done a poor job of helping recipients retain buying power in the face of inflation. Furthermore, Social Security COLAs are frequently wiped out by Medicare Part B increases. By capping premium increases for 2021, seniors may finally get a bit of a reprieve at a time when they really need it.

But it's not just seniors on Social Security who need that protection. Medicare eligibility begins at age 65, which is earlier than full retirement age, or the age at which Social Security recipients can collect their monthly benefits in full. As such, there are some Medicare enrollees who don't collect Social Security and don't pay their Part B premiums directly out of their benefits. It's those seniors who stand to suffer even more if a large Part B premium increase goes through, because Social Security beneficiaries are protected, to some degree, by a hold harmless provision that prevents their Part B increase from causing their Social Security benefits to decrease. But Medicare enrollees who pay their premiums themselves don't get to enjoy that hold harmless provision, and so capping next year's increase will serve them well.

It's too soon to know if the aforementioned bill will go through, but if it does, a lot of seniors could be spared a huge expense in 2021. And given that many are still in the process of recovering financially from the coronavirus crisis, the timing couldn't be better.