Could any of them help you save money?

Medicare open enrollment started October 15 and will run through December 7. For many retirees, shopping for coverage during open enrollment is the best chance to keep medical costs down by choosing an insurance plan well-suited to their needs.

But while choosing the right Medicare policy is essential, many seniors will still face at least some out-of-pocket expenses for prescriptions, regardless of what plan they have.

The good news is that there are proven steps for reducing the costs of the medications you may need in your later years. In fact, a new poll conducted by MedicareGuide revealed four key steps current seniors are taking to help minimize their prescription drug expenses. Here's what they are. 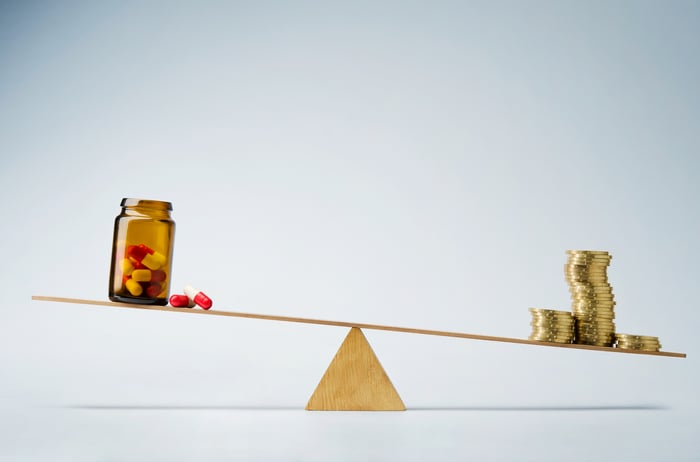 1. Asking for the generic version of a name-brand drug

According to MedicareGuide's survey, 44% of seniors on Medicare were able to cut the costs of their prescriptions by requesting generic versions of their medications. Unfortunately, the majority of retirees who didn't make this request may have paid much more than necessary for a name-brand drug.

As the FDA explains, generic drugs must be virtually identical to their costlier name-brand counterparts. They must have the same essential ingredients; be taken the same way; and have the same strength. If you can get the same medication at a fraction of the cost, there's little reason not to do so.

Thirty-seven percent of retirees on Medicare were also able to reduce out-of-pocket expenses on prescriptions by simply asking for more pills at once.

This is an effective strategy because some prescription drug plans charge the same copay any time you fill a prescription, regardless of the number of drugs in the bottle. If you can get a 90-day supply instead of a 30-day one and pay one copay instead of three, you'll keep more cash in your pocket.

Just make sure the medication doesn't expire in the interim, and that you aren't likely to have a dosage change or stop taking the pill before using your full supply.

3. Shopping around at pharmacies or with apps

Around one in seven seniors, or 16% of those surveyed, said they save on medications by using an app to shop around, or shopping around manually by calling different pharmacies.

Comparing prices on prescriptions may seem like a hassle, but it's worth doing -- there can be wide variation in costs from one store to another. Don't forget to look beyond drugstores, too, as many grocery stores, big box stores, and warehouse stores have pharmacies where you might be able to get a bargain.

4. Asking for a larger dose

Finally, one in 10 retirees requested their medication in a larger dose and used a pill cutter to split the pills. If your doctor has prescribed 50 mg of a drug, for example, you could request a prescription for 100 mg and just cut the pills in half.

Of course, you'll want to confirm with your doctor that this won't compromise the effectiveness of the medication, and make sure you're cutting pills accurately.

If you can take any or all of these steps, you can hopefully keep more of your hard-earned retirement money in your pocket, and spend less on maintaining your health during your later years.