Please ensure Javascript is enabled for purposes of website accessibility
Free Article Join Over 1 Million Premium Members And Get More In-Depth Stock Guidance and Research
By Maurie Backman - Dec 8, 2020 at 8:18AM

It's not just lower earners who worry about retirement.

Falling short financially in retirement is a major concern among working Americans, and often, it's an issue that comes into play for lower earners who don't have the means to max out an IRA or 401(k) plan year after year.

But wealthier Americans are worried, too. In fact, in a recent survey of U.S. adults aged 40 to 65 with annual household incomes of at least $100,000, a surprising 50% said they're worried they won't ever be able to retire, according to Edelman Financial Engines.

If you share that fear, here are some changes to make. 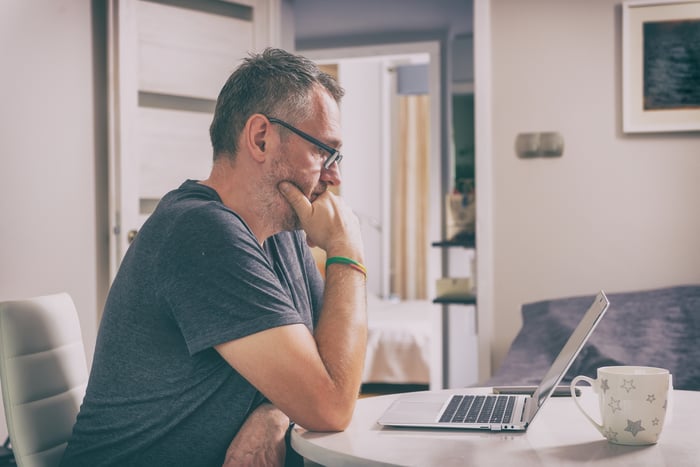 1. Identify one expense to cut back on

If you're earning $100,000 a year or more and can't manage to squeeze out retirement plan contributions, it could be that your budget is failing you, or you're just not following a budget at all. Figure out where all of your money goes each month, and then choose one specific expense to cut back on so you can free up money for your IRA or 401(k). That could mean scaling back your $5,000 annual vacation to a $2,000 trip. Or, if you normally spend $800 a month on leisure and dining out, cut that amount in half.

You don't need to invest a ton of money each month in a retirement plan to grow wealth. Rather, you need to give yourself as long a savings window as possible while investing aggressively. That mostly means loading up on stocks, especially when you're at least a decade away from retirement or longer. In fact, you should still hold some stocks in your portfolio as you inch closer to retirement so your savings keep growing.

Imagine you're 40 years old and you want to retire at 67, which would be full retirement age for Social Security purposes. If you contribute $300 a month to a retirement plan over the next 27 years, and you also invest your savings largely in stocks, you could see an average annual 8% return, which is just below the market's average. All told, that will leave you with close to $315,000. Make it $500 a month, and you'll be looking at $524,000 instead.

It can be done, though. Rather than assuming you'll never retire, rethink what your senior years will look like. You may not manage to travel extensively or retain the large, expensive home you enjoy living in now. If you're willing to downsize and maintain a more frugal lifestyle, you may find that retirement is absolutely within reach.

Retirement insecurity is clearly a problem even for higher earners. Don't give up on retirement. Instead, change your spending habits, invest wisely, and be open to different versions of what your senior years look like. You'll eventually be able to bring your time in the workforce to a close.