Please ensure Javascript is enabled for purposes of website accessibility
Log In Help Join The Motley Fool
Free Article Join Over 1 Million Premium Members And Get More In-Depth Stock Guidance and Research
By Ryan Downie - Feb 14, 2021 at 7:10AM

Can your retirement plan benefit from the income, growth, and stability provided by dividend-paying stocks?

Most retirees should hold dividend-paying stocks in their investment portfolios. These aren't the high-growth rockstars that grab the headlines in financial news, and they aren't the exciting stories that younger investors will crave for the explosive returns.

Instead, these are usually established stalwarts leading mature industries, and they can play a very important role in your portfolio. Dividend-paying stocks offer a combination of income, growth, and stability that few other investments can boast, so you should understand how they can improve your retirement plan.

This one's a bit obvious, but dividend income is enormous for retirees. Once your work income stops, you're forced to live off Social Security benefits and whatever cash flow is generated from pensions, investment accounts, or annuities. As pensions become less popular, people are relying more and more on the interest and dividends from their retirement accounts. 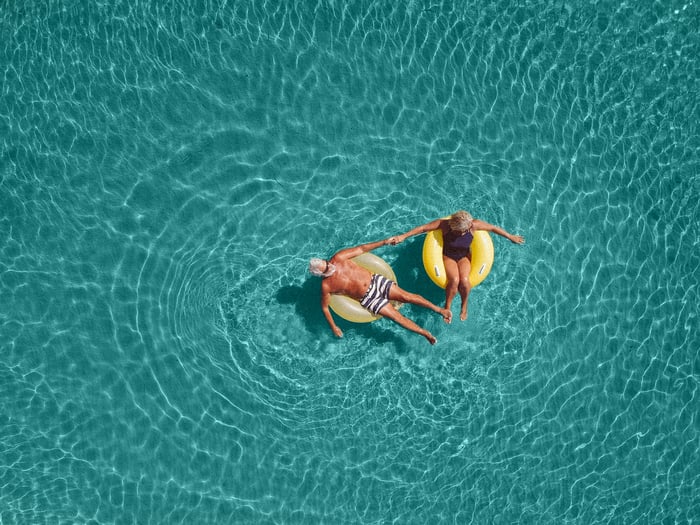 The S&P 500 average dividend yield is 1.6% right now, so that's just under $1,600 of dividends each year for every $100,000 invested in the S&P 500. Investors are able to improve upon that number by allocating more heavily to stocks with historically stable and high dividends. For example, most of the Dividend Aristocrats offer higher yields than the S&P average. If you want to enjoy more cash dividends than simple index investing can provide, prioritize mature stocks.

Adding additional risk might not be a great move for retirees, but high yields are also available in the financial, real estate, and energy sectors for anyone who is confident that those portions of the economy are going to recover in 2021.

Dividends combined with bond interest allow retirees to keep up their lifestyle without depleting their savings. The 4% rule indicates that you can only safely withdraw 4% of your retirement account each year without running out of money, and even that rule of thumb is being revised downward due to longer life expectancy and low interest rates. Dividends allow you to take cash returns without selling your stocks, which means you'll be less affected by bear markets and recessions.

Retirees don't like market volatility. Years of hard work and savings can be wiped out temporarily by market corrections or an unexpected crisis. That's really scary when you don't have any earned income from working, especially if you need your investments to produce cash in the short term. You don't want to sell low in the stock market just because you need to pay bills.

That should make dividend stocks even more enticing to retirees, because they tend to be less volatile than other stocks on the market. This is partially due to the fact that they produce returns regardless of market performance, so people tend to buy them up in times of uncertainty. Additionally, companies that pay dividends tend to be more mature and stable. Growth companies choose to invest their cash in aggressive expansion, but companies like Walmart and Coca Cola chug along and return cash to shareholders. They don't have the same growth opportunities, but they're also less likely to experience severe reductions in financial performance.

Income and stability are great features of dividend stocks, though many would argue that bonds are actually better at delivering those benefits. True or not, dividend stocks differentiate themselves by offering another key characteristic -- growth.

Dividend stocks lag the high-flying tech and consumer cyclical stocks during bull markets, but they still appreciate over the long term. Most financial plans wisely call for reduced risks in retirement, but you can't abandon growth altogether. Your investment time horizon may shrink from decades to years, but it's still important to plan for the latter years of your retirement.

Inflation is a constant force that will erode buying power every year, which is really a problem on a fixed income. Dividend stocks combat inflation by rising with the rest of the market. Healthcare costs are another major concern for older people, and the average American couple incurs around $300,000 in medical expenses during retirement. Bonds or savings accounts probably aren't going to appreciate enough to comfortably pay for hospital bills 20 years down the road.

Investors need to seriously consider how the income, stability, and growth from dividend stocks can have a positive effect on their retirement plan.