Even if it's been decades since the ink dried on your divorce decree, those marital vows you took can pay off in the form of higher Social Security benefits. As long as you haven't remarried, your marriage lasted at least 10 years, and two years have passed since your divorce was finalized, you can qualify for up to 50% of a living ex-spouse's benefit once you're both eligible to start collecting.

Many people will get more Social Security simply from claiming based on their own record, rather than an ex's. (Sorry, you don't get both benefits.) But if you have a limited work history, collecting on an ex's record could give those monthly checks a serious boost. 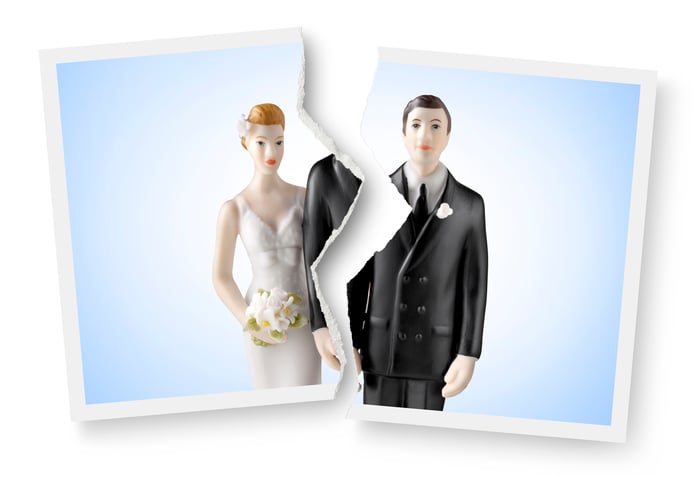 There are a lot of misconceptions about Social Security and divorce. Here are seven myths that are just plain wrong.

A December 2020 Fidelity survey found that 52% of adults believed that someone's ex-spouse could influence their Social Security benefits. Nope. Totally false. Claiming based on your ex's record has absolutely no impact their benefits. If they've remarried, their current spouse's benefits aren't affected either.

2. Myth: Your divorce decree can ban you from getting their benefits.

Some divorce decrees do state that one spouse is prohibited from getting the other's benefits. But as long as the marriage lasted at least 10 years, those clauses are "worthless and never enforced," according to the Social Security Administration.

3. Myth: You need your ex's blessing.

You don't need to track down your ex so that they can sign off. Social Security won't contact them if you're using their record to qualify. However, you'll need to provide some information about them so Social Security can locate their record. If you don't have their Social Security number, they may be able to find them if you can provide your ex-spouse's name, parents' names, and their date and place of birth.

4. Myth: You have to wait for them to take benefits before you can claim on their record.

To get your ex's Social Security, they need to be eligible for benefits. That means they must be at least 62 with a minimum of 40 work credits, which is the equivalent of 10 years of full-time work. But it doesn't matter whether he or she has actually claimed yet. As long as you're at least 62, you can start drawing benefits.

5. Myth: You get to choose between your benefit and theirs.

You don't get to choose between your benefit and theirs. When you apply for Social Security, you'll get whichever is higher: your benefit or theirs. If their earnings history qualifies you for more benefits, Social Security will give you whatever you're eligible for based on your own earnings, then use their record to give you the difference.

6. Myth: You can get delayed credits if you're claiming on their benefit.

7. Myth: You can take benefits on their record and then switch to your own larger benefit later on.

There's some truth to this one: You may be able to file what's called a restricted application for Social Security to claim your ex-spouse's benefits and then switch over to your own higher benefit after you reach full retirement age -- but only if you were born on or before Jan. 2, 1954. The Bipartisan Budget Act of 2015 eliminated that option for anyone born after that date.

Should you take your ex's Social Security?

Whether you're claiming on your record or theirs, be aware of the consequences of starting Social Security early. You can only qualify for 50% of their benefit if you wait until your full retirement age. If you start benefits at 62, your checks will only be 32.5% of their primary insurance amount.

If you meet the eligibility requirements for taking your ex-spouse's benefits, it's certainly worth having Social Security calculate both benefits so you can get the maximum amount. You won't affect their benefits, and you won't even have to contact them.