The stock market didn't set a new record yesterday, yet the fact that even minor declines became news stock investors paid attention to shows just how much we've started to take the four-year bull market rally for granted. Though as invincible as stocks seem to be right now, news headlines like MarketWatch's "Dow 15,000? Try 116,200" and other outlandish targets shouldn't make you worry about missing out on the next big moves -- but rather that investor optimism is rapidly moving toward irrational exuberance.

Individual investors are back

For years, the stock market has climbed despite the absence of many regular investors. With so many people having suffered huge losses during the 2008 financial crisis, the severity of the damage to their personal finances made them wary of climbing back into stocks. Even as the market has recovered all of its lost ground and moved further upward to uncharted territory, ordinary investors have been slow to move back into the stock market.

But this week's news shows that that reluctance to invest might soon be a thing of the past. According to the American Association of Individual Investors, bullish sentiment among those surveyed rose almost 10 full percentage points in a single week, climbing to 40.8%. Meanwhile, bearish sentiment fell nearly as much, with the 27.4% figure down 8.5 percentage points from the previous week. 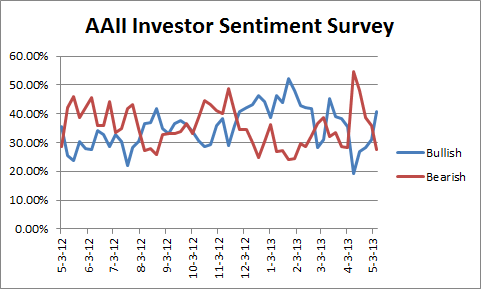 By themselves, these numbers don't look all that extreme. Bullish sentiment has been higher during several weeks just in the past few months, let alone when you look back several years at past historical data. Similarly, we've seen fewer bearish investors at key points recently.

But one thing the chart doesn't show is that the rapid increase in bullish sentiment -- by more than 20 percentage points in just the past four weeks -- is extremely uncommon. It's been three years since we've seen such an aggressive move, and if the rally continues, then investors could easily get even more optimistic in the weeks and months to come.

Why is optimism bad?
It's not immediately obvious why strong investor sentiment is news stock investors should fear. But in general, when you look back at past market peaks, you'll find high levels of bullishness. In October 2007, bullish investors represented nearly 55% of those surveyed, compared to just 25% to 26% bearish. In January 2000, the level hit 75% bullish versus just 13% bearish.

The track record of individual investors is equally bad at market bottoms. In early March 2009, bullish sentiment was just 19%, compared to 70% bearish. That was the week the market hit its lows for the cycle.

You can find similar long-term moves from other stocks. The rise and fall of Netflix (NASDAQ:NFLX) in light of its strategic shift from DVD home delivery to streaming video reflects huge changes in investor sentiment throughout its achievements and miscues. Investors were happy about growth until they decided that a price hike would threaten subscription growth; yet once it became clear that subscribers hadn't abandoned the service, the stock came roaring back again.

Don't panic, but be prepared
The current figures on stock market sentiment aren't reason to sell everything right away. But by keeping tuned to this type of sentiment-driven news, stock investors can prepare their portfolios for the next turn in the market -- whenever it comes to pass.