As bad as that sounds, though, there might be a silver lining in the form of higher payments later. In fact, in some cases, you'll be just as well off claiming early while you're still working as you would be if you had simply waited. Let's take a closer look at how Social Security treats early-benefits recipients who still work.

Moreover, you're entitled to earn up to a certain amount without triggering benefit reductions. In 2015, if you finish the year younger than full retirement age and earn less than $15,720 from your job or from self-employment, then you'll keep every penny of your Social Security benefits. Those who will turn 66 this year have an even higher limit of $41,880 before the SSA will take away any benefits.

Above those limits, though, you'll start losing money. For those aged 65 and under, at the end of 2015, the SSA deducts $1 in annual benefits for every $2 over the limit. Those who turn 66 during 2015 have a $1 deduction for every $3 they earn over the limit. 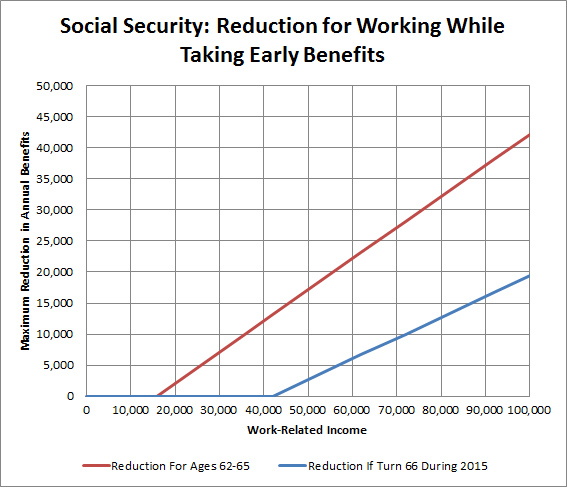 For instance, say you're 62 and expect to earn $23,720 from your job in 2015. You decide to claim early Social Security at the beginning of the year and are entitled to $800 per month. Because you're $8,000 over the limit, your benefits will be reduced by half that amount, or $4,000 for the year. As a result, the SSA will withhold five months' worth of your $800 payments.

Why the SSA rules aren't always bad
Fortunately, there are some aspects of the Social Security forfeiture rules that blunt the impact in some cases. First and foremost, there's a special rule that applies during the first year in which you retire that essentially allows you to ignore earnings from earlier in the year. So, if you retire in mid-2015 right when you turn age 62, your monthly earnings from work earlier in 2015 won't result in reduced Social Security payments, regardless of how much you made.

Moreover, even if you do have payments taken away for a certain number of months in the year, you'll get credit for those months when you reach full retirement age. In the example above, if you lost five months' worth of benefits each year from age 62 to 66, the total loss would be $16,000, or 20 months of benefits. But when you turn 66, the SSA will recalculate your benefit amount as if you had started taking payments 20 months later than you actually did.

That would change your future payments from $800 to about $900 per month, allowing you to recoup the lost $16,000 over time. In a more extreme and unrealistic example, if you earned so much from ages 62 to 66 that you lost all of your Social Security benefits, your benefits would be recalculated upward all the way to the same level as if you'd waited until full retirement age to claim all along.

Note, though, that only those claiming benefits on their own work history get the benefit of this recalculation. If you claim spousal benefits, on the other hand, you don't get an upward recalculation for lost monthly payments. That makes it much more important for those depending on spousal benefits to be smart about when to claim Social Security if they're still working, because they'll never recover any money they lose.

No one likes to lose benefits they're entitled to receive. But working and getting early Social Security benefits doesn't always leads to a worse result than waiting to claim. By understanding the rules entirely, you can put yourself in the best position to make an informed decision about when to claim benefits even if you're still working.

Social Security Benefits: What Claiming Early While You're Working Really Does @themotleyfool #stocks Next Article
Current