I have a confession to make: When I was in my 20s -- and, if I'm being real, most of my 30s, too -- I was a total idiot with money. It's a bit embarrassing, given that I've been writing about personal finance for most of my career. Here I was, writing about the perils of creating debt and the importance of maxing out one's 401(k), while being deep in credit card debt and barely saving for retirement myself.

I finally turned my financial life around in my late 30s. If I could go back and do it differently, I would. Since I can't, I decided to write a note to my younger, penny-reckless and pound-foolish self, in the hopes that sharing the wisdom I've learned over the past 20 years will help other 20- and 30-somethings avoid some of the dumb money moves I made. 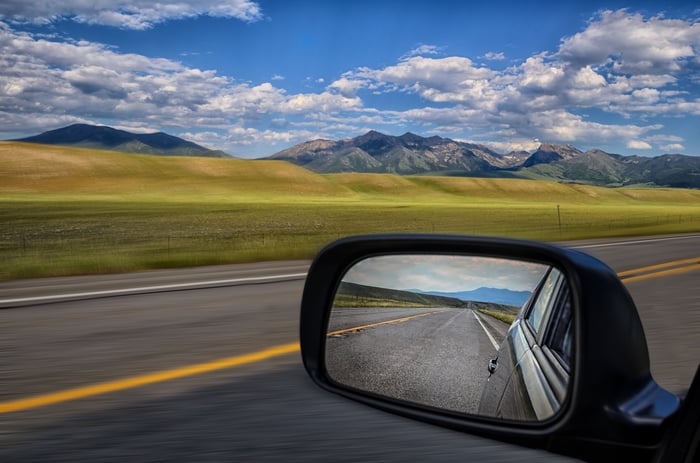 My financial mistakes may be in the rearview mirror, but their lessons have stuck with me. Image source: Getty Images.

You don't know this now, but if you take these financial lesson to heart, you'll save a lot of money (not to mention pain and heartache).

1. Debt sticks around long after the stuff you charge on your credit card (with interest)

Buying something shiny and new on your credit card may feel exhilarating, but here's the (not-so) funny thing about debt: Long after the purchase of that brand-new dress, gadget, video game, or dinner with friends has become a distant memory, the cost will linger if you don't pay it off right away. I learned that the hard way: In my early 30s, I dug myself into debt to the tune of $13,000. (Of that, $6,000 was a down payment on a lease for a brand-new Lexus. When the dealer -- surprise! -- required an initial deposit before I could drive the car off the lot, I sheepishly pulled out my credit card instead of walking away.)

It's remarkably easy to sink into debt, but repaying that debt can be a major struggle, because as the balance mounts, so do the interest and finance charges. For example, let's say you have a $1,000 credit card balance, and the monthly minimum payment is 2%, or $20. At 17.47% -- the national average annual percentage rate (APR) for credit cards -- it would take 91 months (7.5 years) to pay off, and you'd rack up an additional $801 in interest charges.

What's more, the longer you hold on to debt, the more it hurts your credit score. Any missed or late payments ding your credit score even more. These black marks on your credit can stick around for up to seven years. So it's best to use credit responsibly, which includes paying off any balances each month.

My dad, a career banker, was my first financial advisor. Shortly after I got my first job out of college, I remember sitting down with him to select the funds in my 401(k) account. While his investment advice was helpful, what my dad didn't tell me was that I should be saving as much as I could, as soon as I could, to build my retirement account balance while I was young.

3. Don't be in such a hurry to move out after college

When I moved back in with my parents after graduation, all I could think about was how soon I could move out on my own. If I'd known then what I know now, I would have lived at home much longer so I could save money and set myself up financially for the future. Instead of living rent-free at my parents', I moved in with my unemployed boyfriend and ended up supporting both of us.

According to the U.S. Census Bureau, more than one-third of young adults are living at home after college. While not always ideal, moving back in with Mom and Dad after college has its advantages. For starters, if you're living there rent-free, like many young people today, you can more easily pay off debt and prioritize savings. If you have student loans or other debt, you can use your time living at home to tackle those payments. In addition, instead of paying for rent, food, utilities, and other expenses like most people who live on their own, you can allocate more money toward building an emergency fund and getting a jump on saving for retirement.

When I graduated college, I made around $30,000 a year (gross). Accounting for federal and New Jersey state income taxes, if I'd lived at home for a year and saved even half of my take-home pay, I would have socked away $12,276. That would have paid for a security deposit and first month's rent on a nice apartment in a good neighborhood, with plenty left over for emergencies. In my early 20s, having $12,000 in the bank would have at least bought me peace of mind.

4. Living paycheck to paycheck is a bad idea

In my 20s and most of my 30s, I spent every dollar I earned, usually before my next payday. There were days when I'd literally be hunting in my couch cushions and rooting through my car for spare change because I was too broke to eat. It took becoming a parent for me to learn the value of paying myself first. Suddenly, it wasn't all about me; having two children who depended on me for their well-being was a huge wake-up call.

Don't wait until you have dependents to start setting money aside. Even if it's only a few dollars, save what you can as often as you can. Once you've established a consistent savings habit, consider raising the amount you put away over time to reach your goals faster.

Lots of people shop to relieve stress, and I was one of them. Most Americans have indulged in retail therapy, and while shopping can lift your mood in the short term, that happiness is fleeting, while the financial hangover lingers. Using shopping to combat sadness and depression can lead to poor financial decisions, which can become a vicious cycle that creates more sadness, or worse, regret. Instead of using retail therapy to make yourself feel better, try other mood-boosting alternatives, like exercise, meditation, or spending time with friends and family.

They say hindsight is 20-20. When it comes to money, looking back on your mistakes and learning from them definitely makes you wiser and wealthier in the long term. Of course, the best way to stay out of financial trouble and build wealth over time is to avoid making money mistakes like these in the first place. May you become wealthier -- and wiser -- much sooner than I did.