A 401(k) is an employer-sponsored retirement plan offered to many employees in the U.S. Participants elect a percentage of their paycheck to defer toward their retirement savings in the plan.

Employers have largely started offering 401(k)s versus pensions. Instead of a defined benefit at the end of a long working career, employees now control how much (or how little) to contribute to their retirement savings. 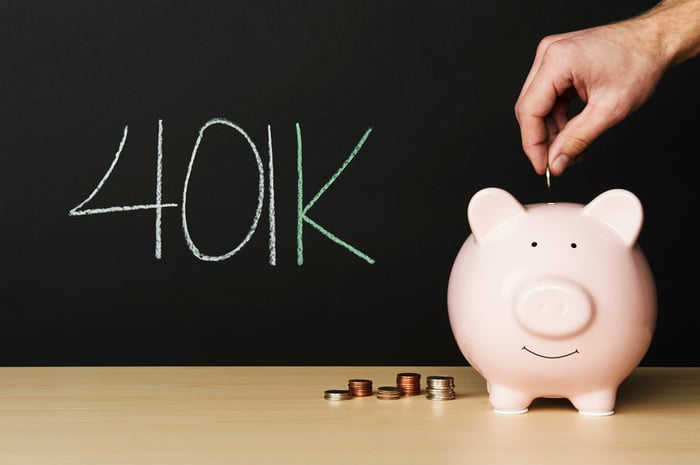 Savings in a 401(k) are tax-advantaged. Depending on the type of account an employee sets up, contributions may be tax- deferred (traditional) or tax-free upon withdrawal (Roth).

Additionally, dividends and capital gains within the 401(k) account never get taxed. That allows your investments to grow much more because the government isn't collecting taxes every time you make a transaction in the account.

On top of those standard deferrals, some 401(k) plans allow for additional after-tax contributions.

Many plans have a 401(k) loan option, which allows account holders to withdraw up to 50% or $50,000 (whichever is less) from their account. The account holder has up to five years to fully repay the loan.

Note that failure to pay back the loan on time can result in additional income tax and a 10% early withdrawal penalty.

Employees who leave work during the year they turn 55 or later can start taking withdrawals from their 401(k) immediately without penalty. Typically, employees have to pay an additional 10% tax on withdrawals before age 59 1/2 from a 401(k) or an IRA. But separating from service in your mid- to late 50s can be a way to get around that.

Most creditors won't be able to get their hands on your retirement savings in a 401(k) account. However, there are a couple of exceptions. Ex-spouses can seek a share of 401(k) assets in divorce proceedings, and the IRS can come after your savings for unpaid taxes. But in the case of a lawsuit against you or if you need to declare bankruptcy, your retirement savings are safe.

Exemption from the IRA aggregation rule

One common strategy for higher-income households that don't qualify for a Roth IRA is the backdoor Roth IRA. They make after-tax contributions to a traditional IRA and then roll over that contribution into a Roth IRA.

But if you hold tax-deferred funds in a traditional IRA, you'll have to pay additional taxes due to the IRA aggregation rule. You can't specify which funds you're rolling over into a Roth account. Instead, the IRS aggregates all the funds in your IRA accounts, and it determines the average tax status of the funds you rolled over. If you can move all of your tax-deferred funds to a 401(k), you can avoid that problem and reopen the back door.

A Roth 401(k) allows employees to make their paycheck deferral into a Roth account instead of a tax-deferred account. The employee pays income taxes on that money now, and they don't have to pay taxes upon withdrawal. Employees can also withdraw their contributions (but not their gains) without penalty at any time.

A Roth 401(k) might be good for employees with relatively low income and lots of deductions right now compared to what they expect in retirement. It's also a hedge against increases in tax rates during their retirement years. If you think your tax rate will be higher in retirement than it is currently, you may want to consider the Roth option if your 401(k) plan offers it.