Taxes are, unfortunately, a part of life. Even in retirement, you may have to pay income taxes on your retirement fund withdrawals and your Social Security benefits, and those taxes can take a serious bite out of your income.

Although taxes may be unavoidable, planning for them now can make them a little more bearable in retirement. In order to prepare for them, it's first important to understand how taxes will affect your retirement income. 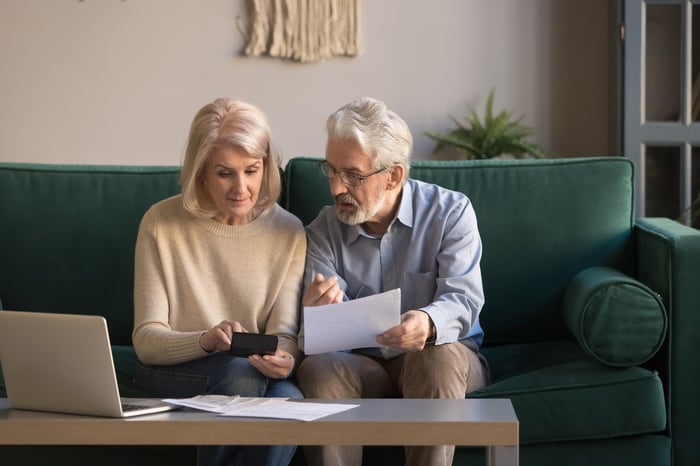 Traditional IRAs and 401(k)s are tax-deferred retirement accounts, meaning you get a tax deduction when you make the initial contribution but will need to pay taxes when you withdraw your cash. With Roth IRAs, on the other hand, you'll pay taxes upfront but your withdrawals will be tax-free.

If you're saving in a 401(k) or traditional IRA, you can expect to pay income taxes on your retirement withdrawals. But exactly how much you'll pay depends on your tax bracket. If your spending levels don't shift much between now and retirement, you may find yourself in the same tax bracket once you retire. But if you expect to spend significantly more or less in retirement than you're earning now, you might end up in a higher or lower tax bracket.

One other tax factor to consider with 401(k)s and traditional IRAs is your required minimum distributions (RMDs). Once you turn 72 years old, you'll be required to start withdrawing a certain amount from your 401(k) or traditional IRA -- since those accounts are tax-deferred and Uncle Sam wants his money eventually. If you don't start taking RMDs on time, you'll owe a hefty tax penalty of 50% of the amount you were supposed to withdraw.

To determine how much you'll owe in taxes, you'll first need to know your "combined income," which is half of your annual Social Security benefit amount plus any other sources of income (Roth IRA withdrawals are excluded, however). So, for example, if you're receiving $20,000 per year in benefits and are withdrawing $40,000 per year from your 401(k) or traditional IRA, your combined income is $10,000 plus $40,000, or $50,000.

If these income limits seem low, it's because they haven't been adjusted since Social Security benefits first became taxable in 1984 -- despite the fact that benefits are increased slightly each year to account for inflation. That means more retirees will likely end up paying taxes on their benefits in the future if the income limits stay the same.

How to minimize taxes in retirement

One of the best ways to prevent taxes from eating away at your retirement income is to invest in a Roth IRA. You will need to pay taxes up front, but you won't pay any taxes on your withdrawals in retirement. In addition, because Roth IRA withdrawals don't count toward Social Security's combined income, that could reduce your taxes on your benefits.

You may not be able to get out of paying taxes entirely in retirement, but taking steps now to determine what your tax situation will look like, and to reduce your future taxes as much as possible, will help you maximize your retirement income.

Retirees: Keep Taxes From Eating Away at Your Social Security Benefits, 401(k), and IRA @themotleyfool #stocks Next Article
Current