These breaks could disappear sooner rather than later.

Nobody likes to pay taxes. Yet many taxpayers don't understand just how favorable current federal income tax rates are compared to where they've been in the past. The current top marginal tax rate of 37% is far below historical 90%+ brackets, and rates for those with fairly large upper-middle-class incomes are extremely attractive.

Ordinarily, the best tax strategy is to avoid taxes as long as possible. However, uncertainty about the 2020 presidential election has many people looking at the opposite strategy: taking advantage of those low tax rates and locking them in now. Here are a few ways you can do that. 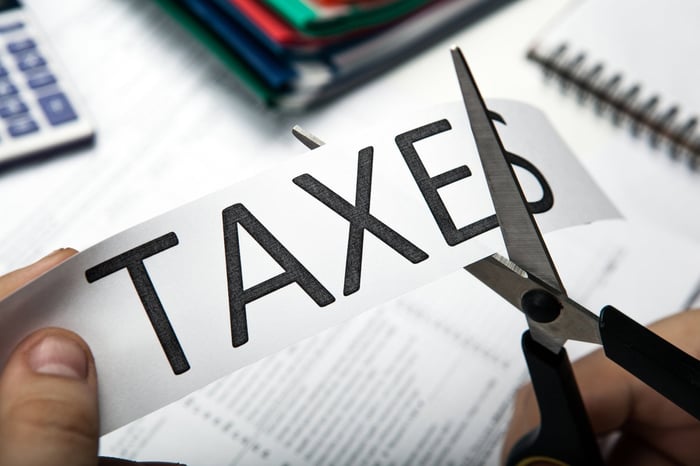 1. Convert traditional IRA and 401(k) assets to a Roth IRA

One tax-smart way to capture current low tax rates is to do Roth conversions with your traditional retirement assets. Roth conversions are always attractive moves to consider because with Roth IRAs, future income and gains on your investments won't be subject to future taxes.

The problem with Roth conversions is that you have to include the amount you convert as taxable income in the current tax year. But if you expect that tax rates will rise in the future, then paying a lower rate of tax now is smarter than paying a higher rate later.

Moreover, anyone can do a Roth conversion right now. There are no income limits. However, there were limits in the past, and Washington could reimpose similar limits in the future. It's therefore worth looking at converting at least some of your retirement assets to Roth IRAs now while the opportunity's still there.

2. Sell stocks at a gain

Tax-loss harvesting is a familiar strategy for most investors. If you have losses on your investments, then you can sell them and use the losses to offset gains elsewhere.

What's less common, though, is deliberately selling stocks at a profit. That's because you'll have to pay taxes on the gains unless you have losses to offset them.

Nevertheless, harvesting tax gains makes sense if you think that current rates are likely to go up. For long-term capital gains on investments held for longer than a year, you'll pay between 0% and 20%, depending on your tax bracket. For top-bracket taxpayers, one proposal that could take effect as early as 2021 would take away favorable rates on long-term capital gains, forcing investors to pay taxes at a rate far higher than 20%.

Finally, there could be even bigger changes to the tax laws regarding estate and gift taxes. Currently, couples can pass more than $23 million in assets to their heirs without having to pay any estate or gift tax. If some proposals become law, that could drop down to $7 million.

Some estate planning advisors suggest making large gifts now to take advantage of the higher exemption amount while it's available. With estate tax rates of 40%, the risks are substantial. Moreover, some proposals seek to take away the step-up in basis that's available for assets held at death. It could thus make more sense than ever for wealthy individuals to consider lifetime gifts of investments that have risen in value.

Fortunately, it's almost guaranteed that regardless of the outcome of the 2020 election, investors will be able to take advantage of current low tax rates through the end of the year. That means you can take a wait-and-see approach and hold off until the election results to come in to do your tax planning.

However, you won't want to wait long once November comes. Depending on how the election goes, all bets might well be off for 2021.