Last week, during the final presidential debate with Joe Biden, President Trump responded to claims that he only paid $750 in federal income taxes for both 2016 and 2017, as per data dug up by The New York Times. Now to be clear, President Trump has yet to release his official tax returns -- something he says he can't do given that they're in the process of being audited -- so it's difficult to know whether those $750 estimates are accurate or not. But Trump insists that he did, in fact, pay much more than $750 a year. In fact, he stated at the debate that he actually prepaid tens of millions of dollars in taxes. But what exactly does that mean?

Can you prepay your taxes?

Technically, there's really no such thing as prepaying taxes. What the president is likely referring to, however, is the practice of paying quarterly estimated taxes -- something anyone with self-employment income or large amounts of income outside of a paycheck is obligated to do.

In fact, more than 9.6 million taxpayers made estimated quarterly payments during the 2018 tax year, reports the IRS. And staying current on those taxes is a good way to avoid costly penalties. 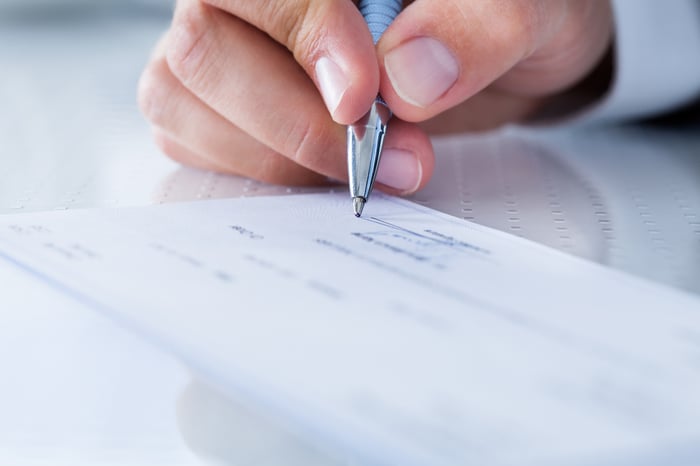 Why do some people have to make estimated quarterly tax payments?

When you work as a salaried employer, the company in charge of your payroll will automatically deduct taxes from your paychecks, the amount of which will depend on your earnings and the number of allowances you claim on your W-4. But when you work for yourself, those taxes aren't taken out as you earn money -- and the IRS expects you to pay as you go, so to speak. As such, quarterly tax payments are due four times a year, only they're not prepaid. Rather, they're made at the end of each quarter. That way, you can see what your earnings amount to and calculate your estimated tax based on those numbers.

But it's not just the self-employed who should be making estimated tax payments on a quarterly basis. If you earn a lot of money outside of your regular paycheck, whether from a side gig you do independently, investments, or another source, then you're also required to pay taxes on that money as you earn it. (To be clear, if you collect a few hundred dollars in dividend income each year, there's no need to make estimated quarterly payments. But if you earn many thousands of dollars in investment income, that's a different story.)

Of course, estimating taxes is no easy feat, especially since there are different variables, like deductions, that come into play to determine exactly how much you owe the IRS. Thankfully, you're not expected to get that number totally right. In fact, if your estimated payments total at least 100% of the tax you paid in the previous year, then you won't be liable for penalties even if you end up underpaying the IRS. (If your income is more than $150,000, your safe harbor is 110% of your previous year's tax bill.) But the tax you underpay won't be forgiven; you'll just owe it when you file your official return.

So where does all of this leave President Trump?

It's possible that he did overpay his taxes when he made estimated quarterly payments. Without a copy of his tax returns on hand, it's impossible to know. But one thing you should know is that if you go overboard on your estimated payments in a given year, you'll be due a refund when you file your tax return for that year. In fact, some people who are self-employed prefer to err on the side of paying more tax quarterly than less, so if you can afford to do so, it's not a terrible practice. While doing so does mean that the IRS gets to collect more of your money sooner, ultimately, that money is returned to you in refund form.