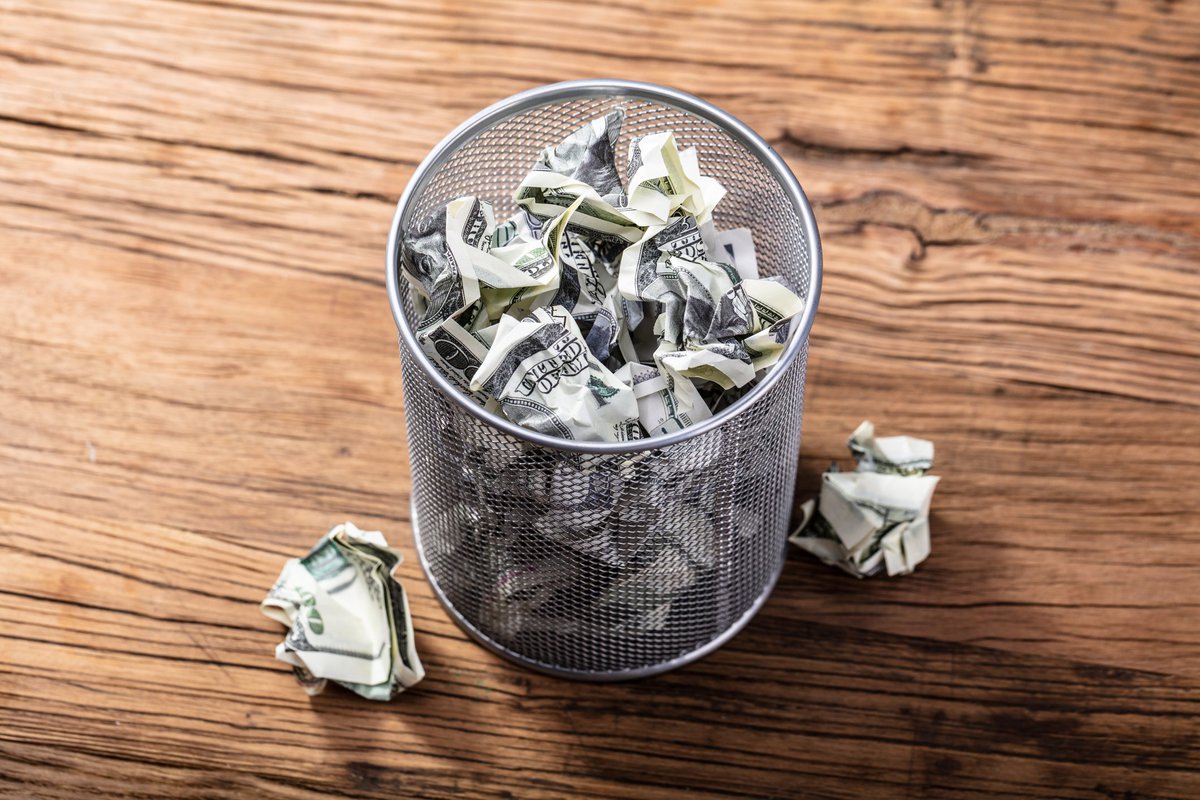 How many times have you been drawn to something in a store window and purchased it, even though you had no intention of doing so until it caught your eye? Or how often have you signed up for a streaming service or subscription box, only to never use the former or leave the contents of the latter untouched for weeks or months?

It's these behaviors that lend themselves to wasting money, and unfortunately, they're hard to break. In fact, 64% of Americans say they've wasted a "considerable amount" of money in their lifetimes, according to a study conducted by The Ascent. The most common offenders? Throwing out leftover or spoiled food, buying fast food, and paying for overpriced beverages (like that morning latte that costs you a ridiculous $6 a pop).

A good 63% of those surveyed say that wasting less money would alleviate some of the financial stress they're currently experiencing. And given the amount of money the average consumer wastes, that makes sense. An extra $1,668 a year could help you pay your bills on time, get rid of some debt, or build an emergency fund so you have a cushion for unplanned expenses that pop up in the future.

2. Save more for retirement

For 61% of survey respondents, wasting less could equate to an uptick in retirement savings. And that's important because your golden years certainly aren't going to fund themselves. In fact, as a general rule of thumb, you should expect to need about 70% to 80% of your former income to live comfortably in retirement. Social Security will only provide roughly half that amount if you were an average earner during your career. It's therefore on you to bridge that gap, and an extra $1,668 a year could be a nice boost for your 401(k) or IRA.

Some people don't invest because they're afraid to, or are too lazy to get started. But for others, not investing boils down to a lack of funds. In fact, 57% of respondents say that if they were to stop wasting money, they'd have an easier time building an investment portfolio. And that's important, because the sooner you get started investing, the more opportunities you'll have to grow your wealth.

4. Do a better job of tackling financial responsibilities

Many Americans struggle to keep up with their bills, but 52% of wasteful spenders admit that they'd do a better job of managing their expenses if they were to stop throwing money away. Being mindful of your spending can help you avoid debt -- and the additional wasted fees and interest payments that come with it.

You have the power to stop being wasteful

Although wasteful habits can be hard to break, a few strategic moves on your part could improve your financial situation and help you achieve the above goals. For one thing, kick impulse buys to the curb by implementing the 24-hour rule, which goes like this: From now on, you'll wait a full 24 hours before completing a purchase you're inspired to make on a whim. During that time, you'll often realize that the item in question isn't a necessity, and you'll therefore avoid wasting money on it.

Furthermore, setting up a budget can help you avoid spending money needlessly. Once you have one in place, you can identify those expenses that must take priority (think housing, food, and transportation), and then allocate your remaining income wisely to avoid wasting it on things that aren't actually so important to you.

Finally, make every effort to avoid debt. When you rack up a credit card balance, you waste money in the form of interest payments, and that's money you could save or use for other purposes instead.

Although wasting money is a common practice, it's one that can hurt you big time. If you're guilty of it, think about the ways your financial life might improve if you were to stop. With any luck, that alone will serve as motivation to stop hemorrhaging cash needlessly.