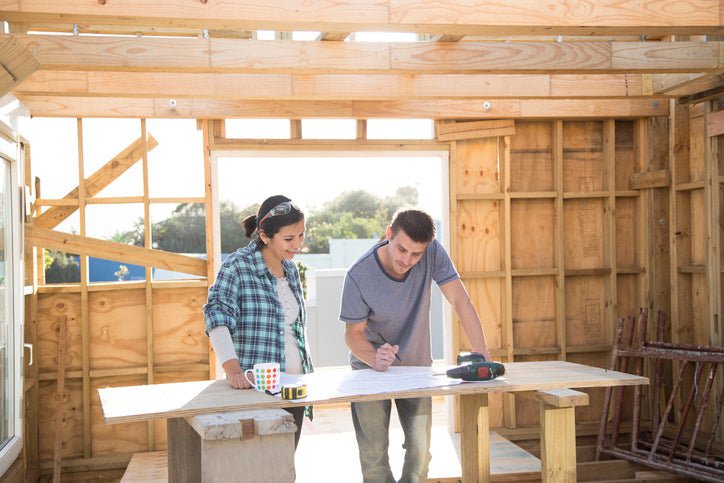 Want to save money on a home? Consider building one yourself. Here's how one blogger did it.

Many people dream of being free of their mortgages well ahead of schedule. But doing so is easier said than done, especially given the number of borrowers who lock themselves into a 30-year loan.

But what if you were able to avoid taking out a large mortgage by building yourself a home to live in? It may seem crazy, but one blogger managed to pull it off -- and enjoy a world of financial freedom without monthly mortgage payments dragging her down.

We spoke to Michelle, who authors the blog Fire & Wide, about her experience of taking building matters into her own hands, and we're sharing her story so that it might inspire you to go a similar route.

Building a home isn't something that happens overnight. For Michelle, it took her and her partner many years to first find the right piece of land to build on, and then dive into the construction process.

One challenge she faced early on was not having many plots of land to choose from -- an issue anyone attempting to navigate today's tight housing market can relate to. But eventually, she and her partner bought their land in September of 2005.

The battle wasn't over there, though. They still had to convince the local council to approve their building plans. So all told, construction on that home didn't start until January of 2008. From there, it took three years of work for that home to be completed by Christmas of 2010.

How did she do it?

Clearly, building a home is no easy feat, so we asked Michelle what her secrets were.

"Google and YouTube were our best friends," she says. "One of the reasons it took us so long is because we had to spend as much time learning what was the right thing to do before actually then doing it."

Of course, Michelle and her partner also knew their limits. As such, they focused their efforts on the tasks they could accomplish solo, but also paid for professionals as needed, like an electrician. The last thing they wanted was a house that wasn't up to code.

When you buy a home from an existing seller, you figure out if you can swing its purchase price and make an offer. When you build a home from scratch, you have to budget carefully along the way. And that's precisely what Michelle did.

As she explains, "We weren't building this house to maximize profit -- it was going to be our home for a big part of our lives. But likewise, the goal was to end up mortgage free at the end -- so using the budget well was crucial."

Some aspects of the home, she says, like its foundation, were non-negotiable -- there's just a certain amount of money it takes to put one in. But she and her partner definitely weighed each design choice carefully to make the right financial call.

"For example, oak-frame buildings are beautiful but hideously expensive," Michelle explains. "So we went for a normal timber-frame house without those exposed timbers -- but then included solid oak skirting and door frames throughout instead of the cheaper painted softwood. Now we still have that quality wood look and feel we wanted but at a fraction of the cost."

Doing a lot of research also helped Michelle make smart decisions in the course of her build.

"Cheapest is not always best, especially if you don't want to be constantly maintaining your house," she insists. "But expensive often meant well-marketed, not high quality. By putting the time and effort into sourcing our own materials, we were able to get really good value."

A lifetime of freedom

Building a home was no doubt a challenge for Michelle. But now, she gets to enjoy the financial freedom of being mortgage free. And that's benefitted her in many ways.

For example, Michelle was able to leave her city career behind and retire early at the age of 43. And now, she enjoys the benefits of being able to travel the globe and soak up new experiences -- which she shares regularly on her blog.

Of course, building a home wasn't the only smart choice Michelle made in an effort to attain financial freedom. As she acknowledges on her blog, she's not necessarily the world's most frugal person, but she does manage her personal finances wisely and sets priorities. And she also has a history of hustling. Case in point -- at one point, she managed several income properties while holding down a full-time job.

Ultimately, building your own home won't necessarily be your ticket to financial freedom -- not by itself. Rather, you may, like Michelle, need to make smart choices on a permanent basis. As Michelle says on her blog, "As our peers moved on to bigger, better houses, cars, holidays, clothes and all the other trappings of modern life, we just didn't. We bought and did what made sense for us -- for the balance we wanted."

Should you endeavor to build your own home?

If you're inspired by Michelle's story, you may be contemplating going a similar route. And to that end, Michelle has some key advice.

"First up, believe it's possible," she insists. "Everything starts with a dream. The trick is to then break it down and turn it into your reality. It's like any other goal that way."

Here are some other key points Michelle notes:

Of course, you don't need to build your own home from the ground up to attain the same type of freedom Michelle has managed to secure for herself. You may, she says, opt to buy a fixer-upper instead. Doing so will allow you to put a personal touch on your home, all the while reaping the savings that come with doing the job yourself.

And finally, there's one more thing you'll need to do, whether you're building from scratch or buying a home to renovate extensively yourself.

"Be patient," Michelle says. "It's one of those things that will take time but is absolutely worth it. The freedom and confidence it gives you is amazing -- well worth all the hard work."

Suzanne Frey, an executive at Alphabet, is a member of The Motley Fool’s board of directors. Maurie Backman owns shares of Alphabet (C shares). The Motley Fool owns shares of and recommends Alphabet (A shares) and Alphabet (C shares). The Motley Fool has a disclosure policy.
Many or all of the products here are from our partners that pay us a commission. It’s how we make money. But our editorial integrity ensures our experts’ opinions aren’t influenced by compensation. Terms may apply to offers listed on this page.