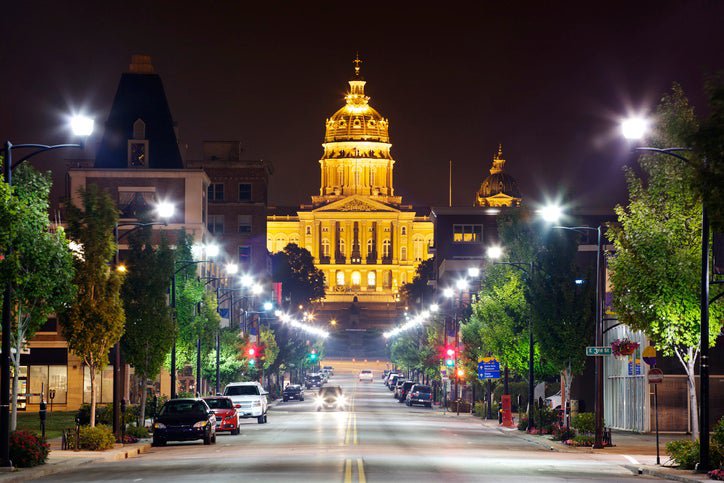 Low cost of living, high salaries, and an even higher quality of life are just some of the reasons to live here.

After being labeled for years as a flyover state, Iowa is making a comeback thanks to its capital city.

In addition to being an ideal location for first-time home buyers, Des Moines, Iowa, has been heralded as a great place to start a family and a startup company's dream locale. It's no wonder this millennial magnet is considered one of the best places to live in the country. If you need more convincing, here are five reasons Des Moines has earned its place as a top destination.

Iowa's capital city was recently ranked No. 6 on The Ascent's list of 10 most affordable cities with high salaries and low costs of living. In fact, Des Moines was the cheapest city on the list, with the cost of living sitting 12.3% below the national average.

At the same time, the city's salaries are higher than the national average. The median household income of $71,164 is well above the $55,283 annual cost of living estimate. This means you can likely live comfortably in Des Moines and still park more money in your savings account.

In addition to being the cheapest city on the list, Des Moines also clocks in with the lowest unemployment rate -- just 3.2%. Not only are there plenty of jobs to go around, but the city is also home to a diverse set of industries and attracts some of the country's most exciting employers.

Also known as the "Hartford of the West" thanks to its thriving financial and insurance sectors, Des Moines houses companies like Wells Fargo, Nationwide, and Principal Financial Group, which employ thousands of Iowans.

If you're more into the start-up culture, Des Moines has you covered. As part of the "Silicon Prairie" region, the city has been named one of the 14 best startup cities in America and one of the most underrated cities in the country for tech workers.

While living in Des Moines will get you the perks of living in a capital, you won't have to deal with a lot of the headaches that come with living in a large city. After all, this charming Midwestern locale was ranked the No. 7 best place to live in this entire country by U.S. News & World Report this year.

It was also named the No. 2 safest place to live in the U.S. by the same publication. What's more, the average commute time in Des Moines is just over 16 minutes, which is less time than it takes to go a mile on the freeway in some other cities. And if you're worried about being the new kid on the block, don't be. The state of Iowa is also known for its tight-knit, welcoming communities, which have their own unique blend of friendliness, otherwise known as "Iowa nice."

4. Enjoy 550 miles of recreation in the great outdoors

While winters in Iowa are no joke, the rest of the year gives residents ample opportunities to enjoy the outdoors. Des Moines is well known for cycling and is home to the RAGBRAI. This is a seven-day cycling adventure across the state of Iowa and is "the longest, largest and oldest bicycle touring event in the world."

Whether you prefer biking, walking, or skating, there are an astounding 550 miles of trails surrounding the Des Moines area where you can enjoy any of these activities. The city's downtown also hosts an exuberant farmer's market that's been named one of the best in America.

Aside from the arts, Des Moines also hosts the Iowa State Fair, which is known internationally as one of the best state fairs in the nation. If sports are your thing, the city has two hockey teams, a minor league baseball team, a basketball team, and a soccer team, among others. There's also a fair share of craft breweries and tasty bites to be found, from vintage hand-dipped ice cream to top-notch Korean fried chicken.

Living in an affordable area is a great way to save money, but it only gets you so far if you're in a place that isn't very appealing. In Des Moines, you can have your cake and eat it, too.