Notion can be summed up in three words: simplicity, familiarity, and affordability. This is a fantastic option for teams looking for a user-friendly collaboration tool that won’t cost an arm and a leg. So, if you need a straightforward tool for planning and executing small projects, Notion is for you. 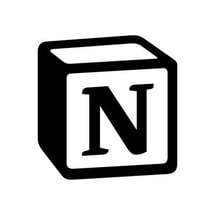 Notion is the perfect tool for small teams and personal projects. This is more than just a software review. This is a personal recommendation.

Notion is a fantastic and affordable project collaboration software. While you won’t find any in-depth reporting or budgeting features, this platform will exceed your expectations when it comes to task management and organization. This project management tool is built with convenience in mind thanks to all of the familiar features, functions, and design elements you’ve seen time and again with similar products.

While I would normally rake a software platform over the coals for its unoriginality, Notion executes these familiar functions with such grace, it's entirely forgivable, especially at this price point. Notion's developers understand what project managers and team leaders are looking for in a collaborative software experience. Phrases like "it just works" come to mind when describing Notion, and sometimes that’s all anyone really wants. They’re not looking for revolutionary technology, but instead are looking for a software platform that will do what they want, when they want it to.

Moving onto value, the best part about Notion, aside from its simplicity, is the lack of risk when trying out this platform. Instead of relying on a timed free trial which requires you to hurry through your setup and onboarding in order to understand the true capabilities of the platform, Notion opts to simply limit the number of assets you add to your project. By the time you use up your trial resources, you’ll have all of the information you need to decide whether this tool is right for you.

It’s been a few months since I’ve been in the swing of reviewing software, and I have to say that Notion is the perfect tool to get me back in the game. A colleague recommended this tool to me not long after I decided to review it. He used this program to help manage his studies, while we both attended the same cybersecurity program this year, and he had nothing but positive feedback to offer.

That being said, I implored him not to divulge any details because I didn’t want his views to influence my own. Amazingly, I came to many of the same conclusions he did in my Notion review.

Who is Notion for?

Because it lacks reporting and budgeting features, Notion is best for single users and small teams looking to collaborate and streamline their project management process. In fact, if you’re looking for a simple task manager for your personal organization needs, Notion offers a decent free option that you can share with up to five other people.

This tool is extremely user-friendly and affordable, making it a great entry-level project management tool for everyone except enterprise users with complex projects.

Notion’s feature list is quite short for a project management tool. Considering its narrow focus, I’d categorize Notion as more of a collaboration tool in the same vein as Basecamp which is used more for planning and executing rather than working through the entire project life cycle.

Notion’s ease of use

Right off the bat, the sign-up process was extremely simple, so I’d say I was off to a good start for my Notion app review. All I had to do was connect my free trial to my Google account and I was off.

Notion immediately asks for some qualifying information in order to better structure the tool to your needs, such as team size and industry. Once you’re in, you’re given the option to either start from scratch or use one of Notion’s many templates. Since I work in marketing and writing, I selected a content marketing template.

Notion’s pre-made templates make it easy to hit the ground running for most of your projects. Image source: Author

Notion incorporates plenty of well-known project management software elements into its design philosophy. The kanban boards, task lists, and project schedules aren’t too different from other popular project tools, such as monday.com or Asana. What makes Notion so fantastic is the clean aesthetic that makes use and navigation a breeze.

The thing is, Notion isn’t a full-stack project management software product. This platform isn’t made for handling project budgets or timesheets, at least not natively.

There’s nothing stopping you from handling these tasks using other tools and sharing your progress in Notion, but if you’re looking for a do-it-all project tool, Notion's not for you. Instead, Notion is laser-focused on task management, collaboration, and efficiency. There, it excels. 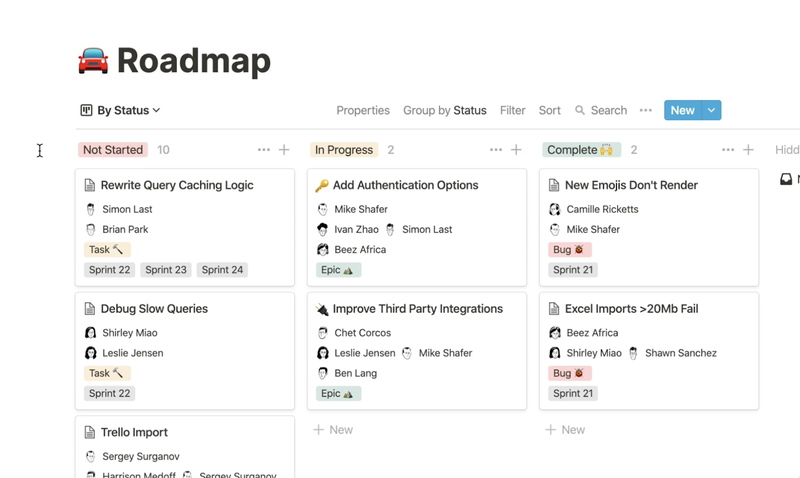 Notion’s kanban board feature isn’t anything new, but I appreciate sticking to a simplicity that anyone can grasp. Image source: Author

You can easily navigate to any aspect of your team or projects using the left-hand navigation menu. There's nothing you have to go searching for, making it a great tool for teams looking to eschew the complexities of many corporate project management platforms.

I have to be honest: I'm a sucker for modern minimalist designs because they do away with the clutter and confusion of older application designs. Notion succeeds brilliantly with this minimalist approach. Everything you need is one or two clicks away. 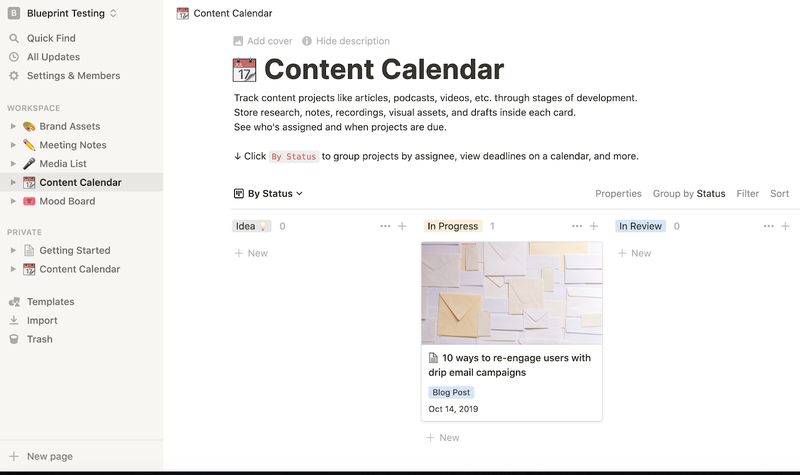 Maybe it’s because I’ve seen far too many project tools and all their design quirks, but this tool is designed well enough that it made my experience extremely easy and enjoyable. While I’d usually flog a platform for unoriginality (and Notion breaks no new ground here), this tool is so easy to use it feels like I’ve been using it far longer than just during this review process. That kind of design philosophy speaks volumes to me.

Notion understands affordability. Not only does it offer a free option, but its highest advertised price tops out at $8/month, per user. That is extremely affordable compared to some other options in this market.

Prices like these give me yet another reason to excuse Notion’s unoriginal software design. While some other tools will charge $15 to $20/month, per user, for something we’ve all seen a hundred times, Notion offers their product at extremely affordable rates. I definitely appreciate that.

Notion offers plenty of do-it-yourself support in the form of a robust knowledge base and beginner’s guides. When it comes to support from their own teams, Notion offers a webchat system as well as a support email address. 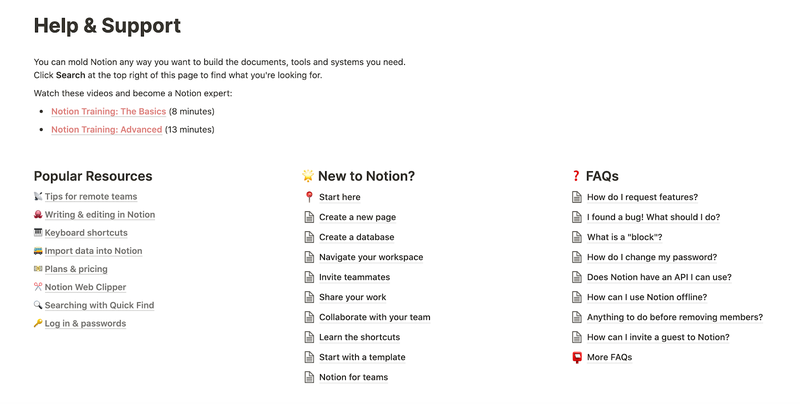 Notion’s knowledge base will help you answer nearly any question you may have about the platform. Image source: Author

I couldn’t find anything that resembled a support number to get a human on the phone, but at this price point, I can’t say I was expecting much in that category.

First and foremost, Notion is affordable. In fact, if you’re looking to try out this platform before buying, you can either work out the functionality using the free version for your personal projects, or you can try out the full platform using their free trial.

The best part about their free trial is that it doesn't have a time limit. Instead, Notion places a 1,000 block limit for the free trial version. A block is any single piece of content added to the platform, such as a paragraph or attachment, which they claim is enough to give you a real taste of what the platform has to offer.

Notion's second major benefit is its simplicity. This isn’t a "do everything" project management software, but not everyone needs budgets, reports, and time tracking. Sometimes all a team needs is a centralized hub to collaborate, communicate, and organize their tasks.

Notion is fantastic in this regard. However, if you find your team dealing with more complex projects with contractors and other outside moving parts in the mix, this solution probably isn’t for you.

Notion in the long term

Even after I’m done with my Notion software review, I still plan on using this platform. With my new cybersecurity career ramping up, I need a tool to keep track of all the technical and creative work I do. Notion fits my needs on a practical and financial level, and given the chance, it just might fit your needs as well. 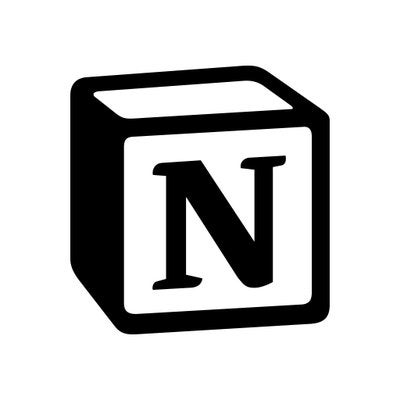 Nick is a seasoned writer and digital marketing specialist with lots of experience in B2B software research. He has always had a passion for technology and has worked as an Apple technical specialist, in the social media startup scene, and also in local DC real estate.