CyberGhost VPN Review
Visit CyberGhost VPN
We may receive compensation from some partners and advertisers whose products appear here. That’s how we make money. Compensation may impact where products are placed on our site, but editorial opinions, scores, and reviews are independent from the advertising side of The Blueprint and our objectivity is an integral part of who we are. Our commitment to you is complete honesty: we will never allow advertisers to influence our opinion of products that appear on this site.

A virtual private network (VPN) is a necessity, not a luxury, to protect your online data and activities. If you're a freelancer, solopreneur, or have employees working remotely, CyberGhost VPN's multiple applications, no-logs policy, and security features that include WireGuard encryption will keep prying eyes off your confidential — and personal! — information.

For too many people, their perception about their level of online privacy is like those I Can Has Cheezburger memes where a cat has its eyes covered and says, "If I can't see you, you can't see me."

You may think you're anonymous online, but a whole host of third parties can — and do — monitor what you're doing even though you're unaware of them.

The solution is a virtual private network (VPN) to encrypt your data and mask your IP address, even on public Wi-Fi and cellular networks.

CyberGhost VPN is a popular consumer solution, but can it work for your small business? We'll take a close look at its features, customer support, and pricing so you can decide if it's your best choice.

Who is CyberGhost VPN for?

CyberGhost has consumer VPN applications for multiple operating systems, browsers, and devices that include multiple encryption protocols, a kill switch, split tunneling, and other security features. Its technical infrastructure includes more than 6,800 servers in 89 countries, and Romania, where the company is based, has no data retention laws and doesn't share user information with global security alliances.

Kape Technologies bought CyberGhost in 2017. This raised concerns with some privacy advocates because Kape's previous incarnation, Crossrider, was known to bundle adware into its software downloads. However, there’s no evidence that CyberGhost's privacy policies have been compromised.

CyberGhost VPN is suitable for individual consumers and small teams or businesses, but it has no multi-user plans. Larger companies with a security operations center (SOC) that need an enterprise-level VPN should look at other providers.

CyberGhost VPN creates an encrypted "tunnel," even on public networks, that protects user data and personal information from third parties. These include hackers, government agencies, internet service providers (ISPs), and the companies that own the websites you visit.

A VPN protects you from third-party monitoring and intrusions. Source: IP Location.

Not convinced third parties can see you? The top of CyberGhost's homepage lists your geographic location, IP address, and ISP.

Consumers often use VPNs to access geo-blocked content — Netflix's streaming catalogs, for example, vary by country due to licensing restrictions — and to avoid bandwidth throttling.

Companies, especially those with remote workforces, use VPNs to protect their proprietary data, networks, and communications. VPNs are also popular with non-governmental organizations (NGOs) and other social change activists operating in countries with restrictive internet policies.

A VPN encrypts your data and masks your IP address. Multiple protocols exist for this, each with its own pros and cons. CyberGhost VPN uses three:

CyberGhost VPN no longer offers two older protocols — PPTP and L2TP — due to their increasing security vulnerabilities. Steer clear of providers that rely on these protocols for VPN encryption.

Your VPN must be available no matter how you're connecting to the internet, and CyberGhost VPN has multiple applications:

After logging into CyberGhost VPN, you have multiple server options: see all servers, your favorites, or those best for streaming and torrenting. The server list also displays distance and usage level, both of which impact data speed. 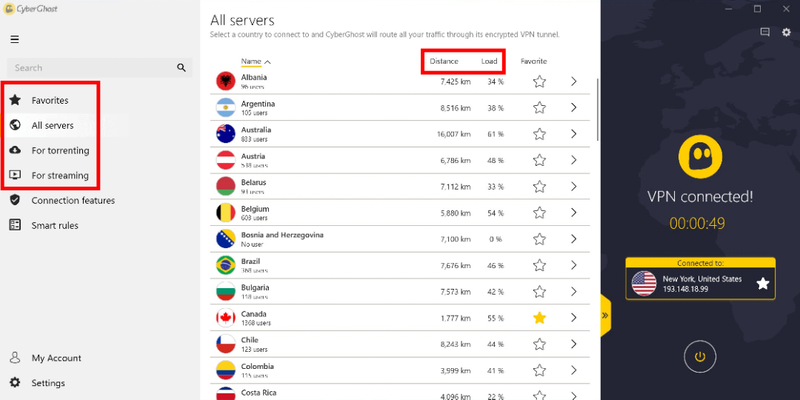 The CyberGhost extension for Chrome and Firefox browsers has the desktop application's basic functionality, including anonymous browsing, IP masking, and visiting geo-blocked websites, but it lacks advanced features, such as the kill switch and access to online support.

For more protection, the NoSpy feature routes your traffic through CyberGhost-owned and -operated servers in Romania to avoid any potential 5, 9, and 14 Eyes surveillance. NoSpy costs extra with the monthly plan but is included for free with annual subscriptions.

Enhance your login security with multi-factor authentication (MFA) via PassCamp.

Other connection options allow you to automatically redirect http requests to secure https websites and compress data to conserve bandwidth. 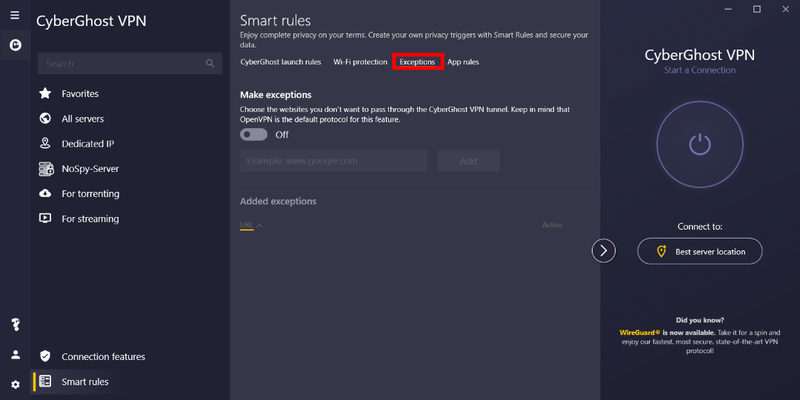 Many banking websites don't permit you to use a VPN, so automatically route them around it. Source: CyberGhost software.

The screenshot above is from CyberGhost VPN for Windows. Specific Smart Rules options and dashboard layout vary by operating system.

CyberGhost's default setting is to send all traffic through the VPN, but that may not be optimal in every situation. Use the split tunneling feature in the Android app to pick which apps do and don't use your VPN.

Split tunneling improves data speed by routing only business applications through your VPN, which also helps avoid bottlenecks and lets you seamlessly connect to public and private networks.

Split tunneling is useful for employee-owned Android devices with personal apps on them. Source: CyberGhost software.

Despite the advantages above, any traffic that doesn't go through your VPN makes you and your data vulnerable. If you have multiple users on your CyberGhost VPN, define your split tunneling policy in your IT risk management plan.

CyberGhost VPN’s ease of use

CyberGhost VPN's usability straddles an important line between simplicity and advanced features. If you're a VPN novice, the default settings provide robust protection with minimal setup. But if you want to get under the hood, you can tweak its settings and configuration to meet your exact connection and security needs.

CyberGhost VPN also has applications for multiple platforms and devices, so it travels with you almost everywhere. Unfortunately, like many VPN suppliers, comprehensive parallel functionality doesn't exist across its apps.

Dashboard options and layout vary by download and split tunneling is available only on the Android app. Research the specific options available for your existing platforms and devices to be sure you get the features you want.

If you do have problems or questions, CyberGhost's 24/7 live chat is a key resource. This support feature isn't offered by all VPN providers, but it’s essential to keep you secure online as you learn CyberGhost VPN's finer points.

The only differences between CyberGhost VPN's four plans are length and price:

Add NoSpy server access to the monthly plan for $59.88/year, but it's included in the CyberGhost price for annual plans. A dedicated, anonymous IP address is an extra $5/month. Get the Windows Security Suite with antivirus protection, data sharing protection, and automatic app updater for $1.95/month.

CyberGhost VPN offers a 24-hour free trial, but I'm not convinced that's enough time to test drive it. The monthly plan has a 14-day money-back guarantee, and the longer subscriptions have a 45-day guarantee. Journalists, NGO representatives, and others who support a "free and secure internet" can get a CyberGhost free plan.

CyberGhost VPN doesn't have a multi-user plan, but installing it on a router protects all the devices on your network while counting as one of your seven allowed connections. This makes it suitable for small teams and businesses, but larger companies needing multi-user management functionality should look at VPN reviews of other providers.

CyberGhost's chatbot first asks what you need help with and then supplies a list of related knowledge base articles. If that doesn't answer your question, select the live chat option. 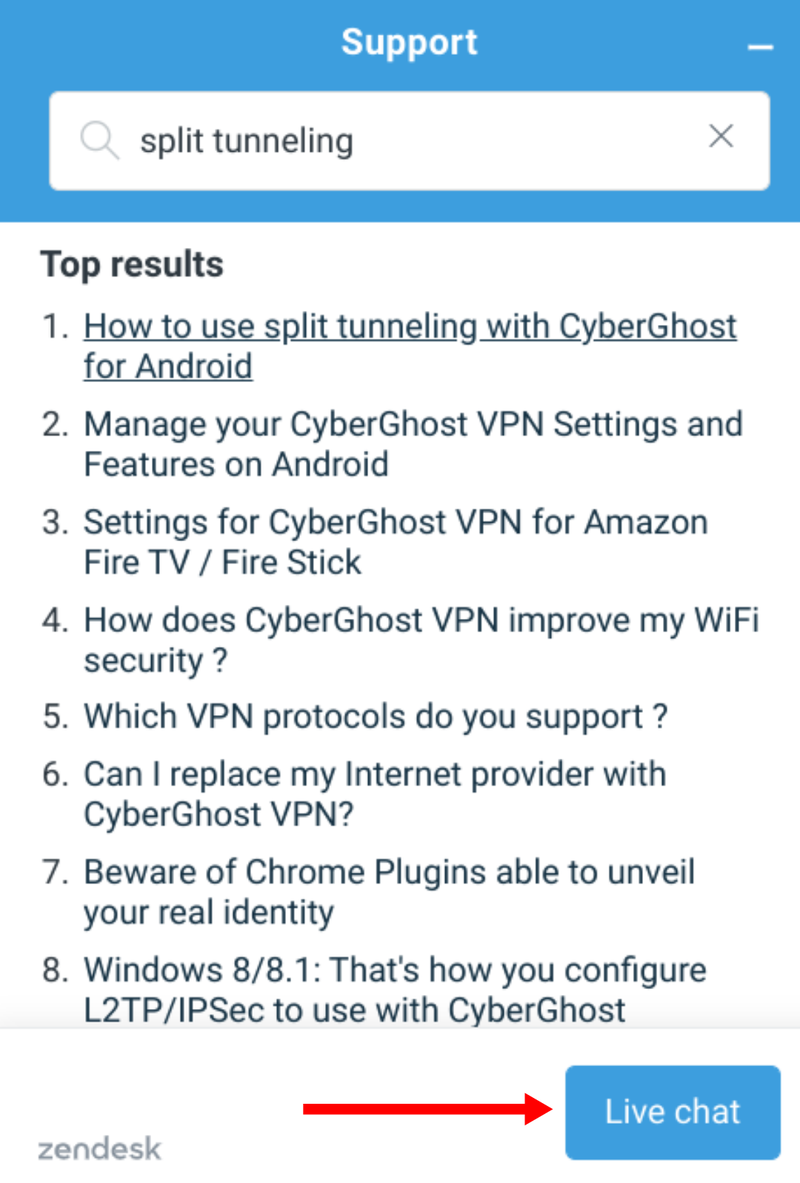 Use the 24/7 live chat if the knowledge base doesn't have the info you need. Source: CyberGhost software.

Your primary self-help resource is a knowledge base. The CyberGhost PrivacyHub blog has articles on security issues, digital freedom, and tutorials to access different web content types. Subscribe to the CyberGhost newsletter to get the latest product updates, but no CyberGhost forum for users is available.

CyberGhost has one of the larger VPN technical infrastructures with more than 6,800 servers in 111 locations across 89 countries. A large server network doesn't guarantee faster data speeds, but it helps. Use the handy online guide to the best servers for CyberGhost VPN torrenting and accessing geo-blocked streaming services in different countries.

CyberGhost is based in Romania, which has no user data retention laws and, unlike most European Union countries, doesn't share information with global security alliances.

Some users are troubled by CyberGhost's privacy policy because it contains an out at the company's discretion: "We also reserve the right to disclose your Personal Data as required by law and when we believe that disclosure is necessary to protect our rights and/or comply with a judicial proceeding, court order, or legal process served on our Web site."

Maybe you're asking, "Is CyberGhost safe?" The answer is a qualified yes. For most users, issues stemming from CyberGhost's privacy policy are unlikely. If you do have concerns, however, research other VPN companies' policies.

You can has VPN

CyberGhost VPN has multiple applications, a kill switch, DNS leak protection, and other security features that make it the cat's meow for individuals and small workgroups. If your business is large enough to use IT help desk software, however, CyberGhost VPN doesn't have the multi-user management capabilities you need.

Who should use CyberGhost VPN?

CyberGhost VPN is suitable for individual consumers, freelancers, and small teams or businesses, but it has no multi-user plans or functionality. Larger companies needing an enterprise-level VPN should look at other providers.

How much does CyberGhost VPN cost?

Each CyberGhost single-user subscription includes the same features. The only differences between its four plans are length and price, which range from $12.99/month to $87.75/three years ($2.25/month). The CyberGhost free trial is only 24 hours long, and no multi-user plans are offered.

What kind of support can I expect?

CyberGhost VPN has 24/7 live chat support or allows you to submit email help tickets. No telephone support is offered. Your primary self-service resource is an online knowledge base and CyberGhost's PrivacyHub blog. Sign up for the CyberGhost newsletter for the latest product updates.

If you're a freelancer or have a small team, up your online privacy game with CyberGhost VPN's multiple apps and browser extensions, kill switch, split tunneling, and no-logs policy. The monthly price is more than many of its rivals, but you can receive substantial discounts with an annual subscription.

If you're a freelancer or have a small team, up your online privacy game with CyberGhost VPN's multiple apps and browser extensions, kill switch, split tunneling, and no-logs policy. The monthly price is more than many of its rivals, but you can receive substantial discounts with an annual subscription.

An Introduction to Multihop VPNs
A multihop VPN offers additional security and privacy by hopping between two or more servers before reaching its destination. Here's why you need a multihop VPN.
By Robert Izquierdo
How to Set Up a VPN for Small Businesses
A virtual private network (VPN) allows your business to transact online with privacy and network security. The Blueprint shows you the steps to set up a VPN.
By Robert Izquierdo