Some projects simply couldn’t have been made possible without team collaboration.

But that’s not to say working with a team is easy. Although teamwork is, without a doubt, a primary factor behind most successful projects, it comes with drawbacks.

For one, reaching a consensus can prove tricky when presented with differing ideas and opinions, which delays decision-making, which, in turn, delays project execution.

Thankfully, decision-making frameworks exist to help teams make the right, timely decisions. One such framework is the DACI.

Overview: What is the DACI decision-making framework?

Said to have been developed by Intuit in the 1980s, the DACI model is a group decision-making technique that assigns roles and responsibilities to members of a team, such as:

Delineating roles in this way clarifies responsibilities, establishes decision authorities, reduces disagreements and friction within the team, and speeds up the project management process.

What does "DACI" stand for?

The driver moves the decision process forward, the same way a car’s driver guides the vehicle to its destination. The driver ensures decisions are made, but they’re not necessarily the ones deciding. One driver per decision is recommended, but sometimes, multiple drivers may be needed.

A driver’s core responsibilities include:

The approver is the person making the final decision. They’re responsible for quality and the only person or group with voting authority, which means they can approve or veto a project or any of its deliverables.

One approver per decision is recommended, but multiple approvers may be required. The approver is typically the business owner, a manager, or a company executive, depending on the size of the organization.

Contributors are the subject matter experts that drivers consult or call upon for information and perspectives. They may not have the power to make or approve decisions, but the inputs they provide are vital to the decision-making process.

They have a voice. Depending on what’s appropriate for a decision, one or more people can function as contributors.

There are two group types that have to be kept informed:

Note that the above DACI framework roles, and the responsibilities associated with them, should be understood and accepted by the persons or groups involved before work begins. You don’t want disagreements delaying decision-making, so everyone has to be clear on what’s expected of them right out of the gate.

Also worth noting, multiple roles can be assigned to one person. For example, the project manager can be both a driver and an approver or a driver and a contributor. So it’s critical to only involve the right people in the process.

How to use the DACI model to make group decisions

How can teams use the DACI framework to simplify group decision-making? Consider the steps below.

Step 1: Determine the decisions to be made

Start by breaking down the project into tasks. No need to worry about resources or timelines just yet. The goal of this step is to get the project team to agree on the action items and their desired outcomes.

Next, assign the DACI roles. Document the decisions to be made and the persons assigned, then share the document with the group.

Again, team members must understand each role’s responsibilities and be accountable for them. You want to avoid anything that may delay decision-making or cause approvers to make decisions based on incomplete information or faulty assumptions. Remember, role clarity is key for teamwork to be effective. 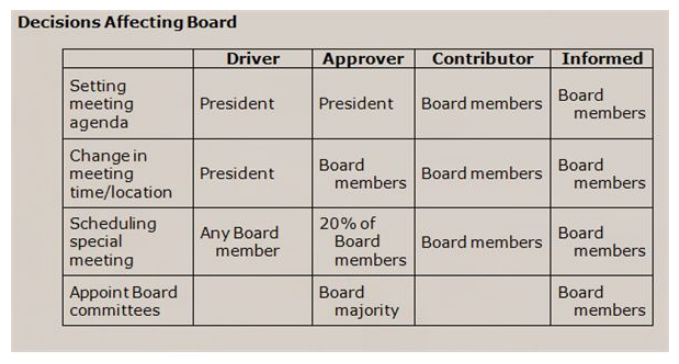 Here’s another example with the different DACI roles mapped out. Source: brighthubpm.com.

The desired outcome will determine the decision criteria, and approvers clarify them to the project’s drivers, who will define the information to gather and disseminate based on those criteria.

Step 4: Decide how stakeholders will be informed

This is basically your communication plan. Communication modes may include chat apps or status updates, your website’s announcement section, an update via social media, or looping people in on relevant email communications.

In this step, the driver obtains the decision information, which they then use to make recommendations. Document all these, and share with the relevant people on the team. The approver should not have a problem deciding if everything they need is available and properly documented.

Step 6: Update the I group

The driver (or anyone responsible for updating stakeholders) updates everyone that needs to be informed according to their preferred communication modes.

No matter the project management framework or approach your team adopts to complete a project — e.g., traditional waterfall, scrum, kanban, or the adaptive project framework — decisions must be made at certain junctures, such as which change requests to approve, which features to include in the next cycle, or whether a deliverable meets the agreed-upon success criteria.

DACI is a framework for decision-making that clarifies whose opinion carries weight, who’s responsible for team communication and rallying the project team to action, and who gets to make the final call if friction within the group arises.

Done right, it speeds up decision-making, and since roles and responsibilities are clear from the get-go, teams are more productive and can do things more efficiently.

Score is the rare blend of a corporate-minded project management tool in an intuitive form. This software comes at a hefty price tag but comes with a tons of features and functionality.

Asana is a unique project management software that prioritizes both team and project manager. The platform is easy-to-use and motivates all team members to manage their projects to their own benefit.