Motion tracking sounds like a complicated concept, but it’s completely doable for even those with limited video editing experience. Once you learn how to motion track, you'll notice it’s used in everyday social media videos, Hollywood blockbusters, and everything in between. Let’s get started!

Overview: What is motion tracking?

Motion tracking, or mask tracking, is the process of following a moving object within a video. For the most part, you’re following the movement with a mask, hence the term mask tracking. Motion tracking is done using position keyframes and opens all kinds of creative and color possibilities in Premiere. Although not as dynamic or functional as motion tracking in After Effects, Premiere’s tracking features are efficient and come in handy.

If you’ve just started learning how to edit videos in Premiere, check out Premiere Pro for Beginners before diving into this video editing tip.

Motion tracking in video editing is an awesome tool to have in your repertoire. With motion tracking, you can add cool effects to objects in your video, or move elements around.

There are two main ways to motion track: mask path or manual position keyframing. As the name suggests, the mask path option works to move a mask with effects. The second option is simply changing the position of an element over time with the position parameter — this is used when you’re not tracking a mask.

Below are some common uses for motion tracking.

One of the most common reasons for tracking movement is color correction and color grading. For example, if you are changing the color of a character's hair, you have to mask and follow the character’s hair throughout the scene to apply the color change consistently.

Frame blocking is a cool transition to use when changing scenes or locations in a video. In a frame-block transition, an object moves across the screen and the clip will change as the object passes. It’s accomplished by mask tracking the opacity of a video layer to become visible only as the object passes by.

For example, one clip may have a character walking across the frame from left to right. As the character moves, they will reveal a new video layer behind them.

You’re watching a documentary and an unidentified informant is giving an interview with his face blurred. To ensure the informant doesn't expose his face, the blur has to follow his face and movements. Mask tracking is used to move the blur effect along with the informat’s head movements.

Video text effects are different from the first three examples because a mask isn't used, so the tracking is done by hand with position keyframes.

Tracking text would be used in a situation such as a label hovering over a person. As the person moves, you’ll have to track the text layer to pursue. Again, this type of effect would be done manually with the position parameter frame-by-frame because there is no mask.

How to use motion tracking when editing your videos

Motion tracking is easy to use within Premiere Pro — everything is done in the Effects Control panel. When tracking a mask, users have the option of motion tracking manually, automatically, or a combination of both. The best and most efficient results come from blending the two. Unfortunately, there isn’t automatic functionality when tracking an element without a mask.

Let’s go through an example of how to blur a face and change the color of an object in a moving scene.

1. Add the effect to the clip

First step, add the effect you want to track. For this example, we’re blurring a face and changing the color of the subject’s suitcase, so I’ll add the Gaussian blur effect and Lumetri color to the clip.

The process of drawing out a workable mask can be tedious — it’s meticulous work — but it’s an important step. If you start off with a poorly done mask, the effect you’re trying to achieve won't look as clean. To create a viable mask, follow the steps: 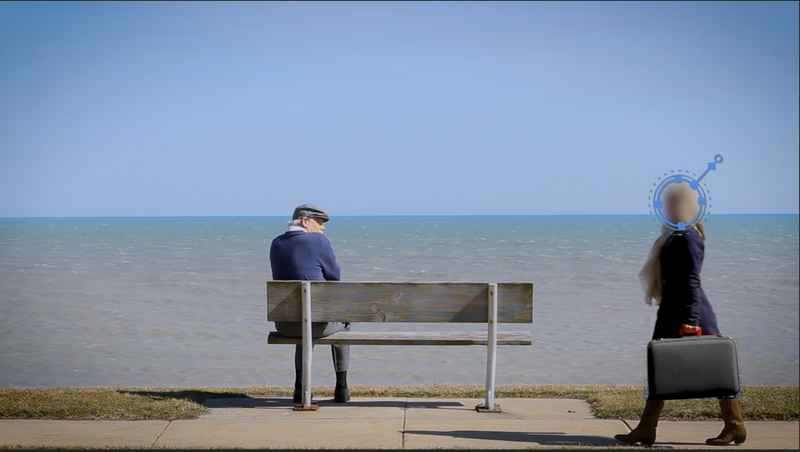 When creating the mask, change the zoom level in the preview monitor so you can drop more precise mask points. This is one of the longer steps in the process, so don’t be discouraged by how slow it can be.

Once you’re satisfied with your mask, it’s time for the fun part — crafting the effect! Keep in mind, the added effect will be traveling with the mask throughout the scene, so don’t overdo the effect.

For the Gaussian blur, I’ll increase the Blurriness level to about 25 to adequately hide the subject’s face. You can also use the mosaic effect in place of Gaussian blur if you prefer that.

And for the Lumetri color effect, I'll take the saturation to 0 in the basic correction panel to change the suitcase from red to a grey.

Premiere’s video editing software has an awesome feature called “Auto track mask path” that will follow the object you masked and create position keyframes for the entire clip. This feature, for the most part, saves you from going frame by frame and adjusting the position of your mask to cover and follow the motion of the object. 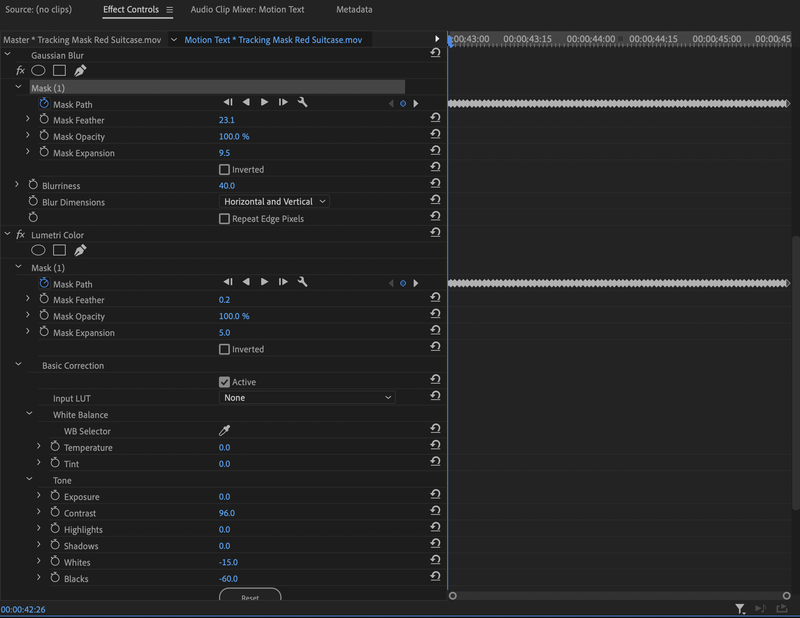 Once the playhead is set, navigate to the mask path parameter within your mask in the effects control panel. Press the play button labeled “Track selected mask forward,” and Premiere will create the path keyframes for you.

Although the automatic tracking has created all the keyframes, it’s best to slowly scroll through the clip to check the tightness of the mask. Automatic tracking does a pretty excellent job of closely fitting the motion, but there will be some frames where you will need to tidy up a straying mask.

To fix the mask in a sloppy spot, just move the mask or adjust the outside points of the mask in the source monitor. Premiere will adjust the keyframe value to match the new position you created.

Generally, the more spread out over time the keyframes are, the smoother the motion is. But, use as many key frames as it takes to ensure an effective mask.

You’re all done! Enjoy your effect as it fluently tracks movement across the frame.

The before and after of motion tracking the blur and color effects. Source: Matt Kilefner.

Being an expert motion tracker opens the door to many artistic possibilities. When done right, motion tracking can change colors, add exciting effects, create transitions, move text all over the screen, and more. As you work with masks and tracking further, look for ways to incorporate the tool into your daily editing and creative workflow.