An Introduction to Multihop VPNs

Your internet privacy and security are increasingly challenging to maintain. A multihop VPN delivers superior protection in these areas. Discover whether a multihop VPN is the right choice for you.

A VPN secures your internet connection, protecting it from prying eyes and cyberattacks. Originally the purview of large corporations, where it’s considered among the best practices for network security, VPN technology is now readily available for small businesses.

Yet not only are cyberattacks on the rise, but they’re also getting increasingly sophisticated, making them difficult to stop. Even a standard VPN isn’t enough security for some.

But is it overkill for your needs? Let’s check out a multihop VPN’s pros and cons to answer that question.

Overview: What is a multihop VPN?

To explain a multihop VPN, it’s necessary to first understand how a standard VPN operates.

A standard VPN uses one VPN server between your device and online destination. Source: VPNtester.net.

This standard VPN setup is sufficient for many internet users. But inherent limitations exist.

If a VPN vendor suffers a hack, you’re still protected by the additional services. But a nested VPN chain configuration isn’t commercially available, so you must set it up yourself.

Advantages of using a multihop VPN

The benefits of using a multihop VPN are hard to beat. It delivers better security, privacy, and anonymity.

The encryption afforded by a standard VPN is enough to stop criminals from accessing your data, but traffic correlation is still possible. A multihop VPN blocks this type of sophisticated attack, providing even greater endpoint security for your device.

A multihop VPN’s web of VPN servers and corresponding IP address changes ensures an attacker cannot correlate traffic exiting a server back to your device. The attacker may see a VPN server’s encrypted traffic but won’t know if this is the final server or an intermediary. 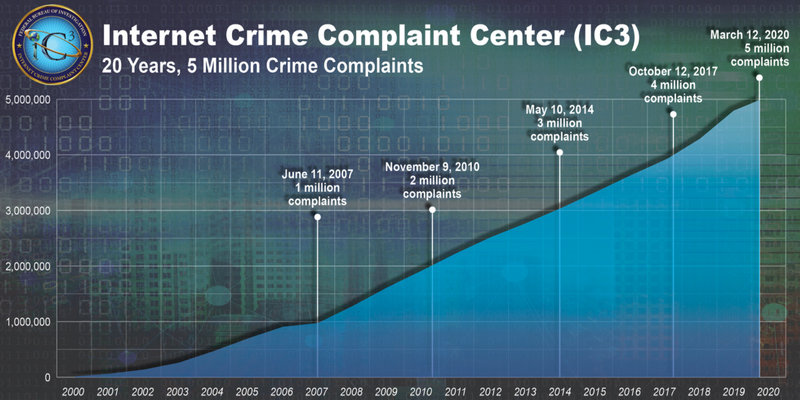 The increase in cybercrime tracked by the FBI’s IC3 shows why internet security is critical. Source: FBI.gov.

Since your IP address changes several times through this VPN chaining, an attacker would need to monitor each of the multiple VPN servers involved, and even then, would have to guess which of the traffic heading to the destination is yours. This makes it nearly impossible to track online traffic back to you.

Several forms of online restrictions exist. An oppressive government may block access to websites. Some content, such as a streaming web series, may be available only in a specific geographic area. So if you’re traveling, you may lack access to the same content you had back home.

A VPN lets you bypass such restrictions. Your internet traffic appears to come from another geography, specifically, the VPN server’s location. This allows you to access blocked content, and a multihop VPN ensures such activity isn’t traced back to you.

Disadvantages of using a multihop VPN

Every technology has pros and cons. While a great tool for internet privacy and security, a multihop VPN comes with some downsides.

Slower internet speed is a reality of forgoing a direct path to your destination. Traveling through multiple servers naturally prolongs the time required to arrive at your destination. Add to this the time it takes to travel the distance between VPN servers, which span the globe. And that’s not all.

The process of encrypting and decrypting your data also increases the time required to complete your online activities. You’ll need a fast internet connection to begin with, or you’ll really feel the hit on speed.

Using a multihop VPN requires more computing resources from your devices. Your smartphone or laptop must encrypt and decrypt all data coming and going online.

This can slow down your device performance, particularly for older devices with limited computing power.

Is a multihop VPN right for you?

A standard VPN’s encryption sufficiently protects the confidentiality of your online messages or site visits from cybercriminals. So whether a multihop VPN is necessary depends on your specific needs.

When a multihop VPN makes sense

Using a standard VPN is important for any business given the rise in cyberattacks. Taking that extra step to adopt a multihop VPN is particularly necessary in these scenarios.

When to skip the multihop VPN

For most, a standard VPN provides enough online security and privacy. A multihop VPN is overkill in these cases.

If you feel a multihop VPN is for you, ensure VPN vendors provide multiple layers of encryption. Some only provide a single layer and simply forward your traffic from one VPN server to the next without applying additional layers.

You also want to confirm the VPN vendor will not keep logs or otherwise track your online activity. Even if the vendor does nothing with this data, having it means it’s susceptible to theft, or at minimum, subject to governments seizing it.

Online anonymity is the biggest benefit of a multihop VPN. So you should only work with a reputable provider with a proven track record of protecting your privacy.