What Does Post-Money Valuation Mean?

The percentage of your business that goes to venture capitalists is based on your post-money valuation. Learn how and why to calculate this number.

Finance is almost as good as the government at coming up with needlessly hard to understand words for relatively easy to understand concepts. As a subset of finance, venture capital (VC) is no stranger to this phenomenon.

We recently published an article defining terms like option pool and liquidity preference. And pre-money and post-money valuation are the black sheep of the term family. They mean exactly what the words seem to mean.

What is post-money valuation?

Post-money valuation is the implied value of the entire company after investment. Typically, the term is only used in relation to venture capital or angel investment.

There is no easy equation for the pre-money valuation. It is whatever the market will bear. As a founder, you can pitch a value based on financial projections, market multiples, and the position of the stars, but VC valuations will be whatever works for them and whatever they can get approved by the investment committee.

5 benefits of a post-money valuation

You’ll see pre-money and post-money valuation in your term sheet, but what is the big deal? Why do we need both?

1. You can calculate what share of the business is being sold

Conversely, if you see in the news that your favorite fast-growing online floss subscription site just raised $700 million by selling 5% of its company, you can calculate the implied post-money valuation. The investment divided by the percent of equity is equal to the post-money valuation:

Imagine how much business dentists will lose with that level of investment into the floss industry.

In the real world, calculating post-money valuation is not this easy. Startups raise money in many ways, such as equity financing, venture debt, and early rounds with anti-dilution provisions. Straight up venture deals selling an easy percentage of the company for a nice round number happen about as often as my four-week-old son sleeps for six hours in a row.

2. Calculate your net worth

This is a vanity benefit. But who cares — if you’ve worked hard enough to sell millions of dollars’ worth of your business, it’s fun to put a spreadsheet together and look at it saying, “I have a lot of money.”

Many enterprising employees are attracted to fast-growing startups that issue stock options as part of their compensation. Employee stock options have a strike price tied to the post-money valuation. Employees with a strike price of $17.50 per share can’t execute their options if the post-money valuation price per share is only $12.

The higher your valuation goes, the more proven your company looks in the marketplace. Many funds can’t even look at you unless you have an investment valuation over a certain amount. It just wouldn’t have an impact on their total returns.

And massive public companies that would shut the door in your face on day one will take a second look if you have a $50 million post-money valuation.

As your business grows, you’ll probably need to raise new rounds of money for different benchmarks. If the pre-money valuation of a new round is above the post-money of the prior, it means investors are valuing your company more.

How to calculate your post-money valuation

The quickest way is with the back-in method described above:

You can also calculate it by adding the investment to the pre-money valuation:

Let’s take a look at an example.

SaaSy Stylez provides a subscription software program to help hairdressers recommend styles for clients. Client appearance features are loaded into the software along with a 1-10 rating of various styles that various clients have actually had done. An algorithm then predicts what the best style would be for each client based on their features and rating history.

The company was smart to include the keywords SaaS (software as a service) and algorithm in their business plan, and they’re now raising a round of venture capital. 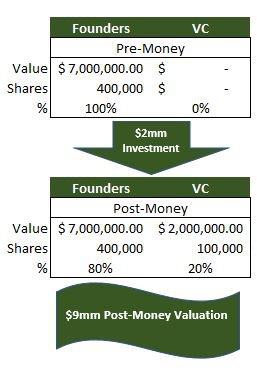 The post-money valuation for Saasy Stylez came in at $9 million.

The price per share of the company can also be calculated. The post-money valuation of $9 million divided by the total shares of 500,000 gives us a share price of $18 per share. Great news for any employees with stock option strike prices below $18.

The key is to know what the numbers mean in at least a general sense and to work with your lawyers in the negotiation to keep your ownership dilution as low as possible.