How to Calculate Your Pre-Money Valuation

Pre-money valuation is the starting point of negotiating with a venture capital firm. Learn how to calculate yours and back up your argument in negotiations.

The term sheet you receive from a venture capitalist will have a bevy of negotiable assumptions. Foremost among those is pre-money valuation.

What is pre-money valuation?

An example of pre-money valuation

Let’s take a look at SaaSy Stylez, which I recently wrote about in my article explaining post-money valuation. 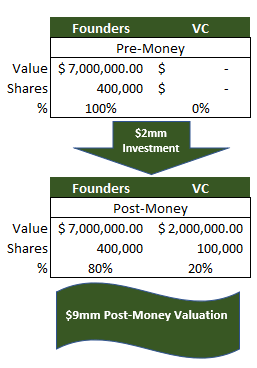 SaaSy Stylez has a pre-money valuation of $7 million.

The company agreed with its investors to a capital valuation of $7 million. Before the investment, there were 400,000 outstanding shares and the founders owned 100% of the company. The investment adds $2 million in cash in exchange for 20% of the company, so 100,000 new shares need to be issued, and the post-money value is $9 million.

What to consider when choosing a valuation model

While the pre-money valuation is a negotiated amount, it still helps to have good analytical backing for whatever number you come to the table with.

To a point, a startup seeking venture capital with $500,000 of revenue doesn’t differ from one that is pre-revenue. If you’re projecting billions of future cash flow, $500,000 doesn’t make much difference, and the cash burn from startup expenses makes it difficult to reliably value the company based on cash flow.

There is a legitimate difference if your company has breached seven figures of revenue and has a long-term cost structure in place. Much of your valuation will still be based on revenue, but there are other factors including EBITDA and return on capital that will impact the valuation when considering a more mature company.

2. Do you have reliable comparable multiples?

Once you have your financial projections down, it’s time to find comparable multiples. VCs love nothing more than comparisons. They’ll compare you to other managers they’ve worked with, your market placement to other companies, and your valuation to competitors.

There are traditionally four types of comparable multiples:

The key is similar companies. If you run a $5 million revenue medical device company with an exciting new product, it makes no sense to compare your business to a stodgy old railroad company trading on the stock market.

Use public stocks for comparison only if nothing else is available. They will typically be far too big for comparison, and they will almost certainly trade for a lower multiple than a fast-growing startup should.

Historic multiples can be a trap. If your company is progressing and proving itself, you want to see some sort of multiple expansion that reflects that. The multiple settled on three rounds ago should have been based on a lot less certainty than there is now.

Other VC investments would be nice to compare, but it is exceedingly hard to find reliable information, especially as the business owner.

The best multiple to lean on is recent acquisition. Ideally, find companies that do something similar to what you do with a similar business model and a similar size. You’ll probably hear these acquisitions called, “precedent transactions.” You can rely on the acquisition price to argue that it is a potential exit for the VC. VCs never want to make an investment without a reasonable exit in mind.

Ownership dilution may be the number one source of wealth loss for startup founders. It is the $640 toilet seat of the venture capital world.

Here are a few ways your shares can be diluted:

When choosing your model and doing your valuation, you have to keep dilution in mind — the VC certainly will.

How to calculate your pre-money valuation

Let’s take a look at how SaaSy Stylez (starting to regret this fake name choice) calculated its $7 million pre-money valuation.

At a $7 million valuation, the investor could earn 85% per year for five years.

Let’s look at each line on the table. Market size is notoriously hard to predict. As I wrote before, I once spent an afternoon walking around a sporting goods store counting the number of items on various end caps to try to predict what the market size would be for portable solar panels.

The market size is the aggregate dollars spent on the entire industry. Typically, this is a domestic number, but companies that can easily sell their product overseas would use a global estimate.

Market share is the percent of the market that goes to your company. Market share times market size is equal to revenue.

10x revenue would actually be a low estimate for a startup, but since I was using the back-in to a number method to make the graphic work, it’s what we’ll go with. The revenue amount each period times the multiple is equal to a projected value in that year. The projected value in 2025 is $150 million and the pre-money valuation is just above $7 million. What gives?

Venture capital is about high returns. An 85% return to the investor seems like a rip-off to the founder but it’s a give-and-take. Eighty percent of $150 million is far more than 100% of $7 million. If you need the cash to grow, it’s worth sacrificing some ownership.

From the investor’s viewpoint, out of every ten companies that a run-of-the mill VC invests in, zero will get to a $150 million valuation. VCs have to discount management projections and then build in a high projected return to make up for the high risk they assume with the investment.

It’s more about the negotiation

Ultimately, pre-money valuation is a negotiated number. No standard formula or accepted resource exists to value every company. It’s about what you can back up and how much you can negotiate for.