Choosing a business structure requires a calculus that weighs tax and legal benefits with startup costs and time. It’s one of the most consequential decisions you’ll make when you first start your small business.

Many small business owners hesitate to elect S corporation taxation because it requires more upfront time to get going. But don’t demur S corp tax status: There are some great tax benefits you could be missing.

How do S corporation taxes work?

Not all C corporations and LLCs can take advantage of the S corporation tax status. Check out all the eligibility requirements in The Blueprint’s guide to S corporations.

3 tax benefits of filing as an S corporation

S corporation status offers a plethora of advantages over other business types. Chief among the perks are double taxation avoidance, shareholder-employee status, and limited liability.

Say a C corporation with one shareholder has taxable income of $100,000.

You can see from this example that cash dividends, called shareholder distributions, are essentially taxed twice. As the owner of a C corp, any income that makes it to your personal bank account gets taxed twice.

S corporations and other pass-through entities cut out the entity-level tax, passing all income tax liability to the owners, called shareholders. If an S corp has $100,000 in taxable income, all $100,000 gets taxed on the shareholders’ personal income tax returns.

It’s important to note that S corps don’t always triumph in the S corp vs. C corp battle. C corporation owners who prefer to reinvest earnings into the business can essentially eliminate the second layer of tax.

Many LLC owners, called members, elect S corp status so they can be classified as employees of their organization. Unlike other pass-through entity types, S corporation shareholders who actively participate in management can also be considered employees.

To the untrained ear, employee classification might seem insignificant. Others hear “payroll tax savings” ringing in their heads.

Owners usually pay both halves of FICA on the entire portion of pass-through earnings, but that's not the case for S corporation shareholder-employees.

The IRS pays special attention to S corporation shareholder-employees to deter abuse of that classification. You must pay yourself a reasonable salary before taking tax-advantaged dividends.

S corporations have two identities. They’re S corporations for tax purposes, but they started as either C corporations or LLCs, two structures that afford limited liability to owners.

Unless you personally guarantee a business debt, your personal liability generally doesn’t extend past your investment in the company. Of course, there are cases where a business transaction “pierces the corporate veil,” opening you up to more liability.

How to file taxes as an S corporation

Your profit and loss statement and balance sheet contain most of the information you need to complete your tax filings. You’ll want to keep your accounting software open during the process so you can examine your expenses more closely.

Before you file your business tax return, you should complete and issue Forms W-2 for all employees. Form W-2 reports employee compensation and how much the employer withheld in FICA taxes during the year.

With cover sheet Form W-3, the forms get sent to each employee, the Social Security Administration (SSA), and state and local governments.

Shareholders who participate in management will receive a Form W-2 because their compensation package must include a salary. Box one on Form W-2 should include any health insurance premiums the S corp paid on behalf of a shareholder.

W-2 compensation, even for shareholder-employees, is a business deduction. I’ll point out where to deduct shareholder salaries in the next step.

S corporations use Form 1120-S to report income, losses, credits, and deductions. It loosely resembles the C corporation return, Form 1120, so make sure you download the correct one.

Here is where you find one of the disadvantages of electing S corporation status: Form 1120-S has many built-in schedules and can get confusing fast. Keep a tax professional on metaphorical speed dial while you complete the S corp tax return. 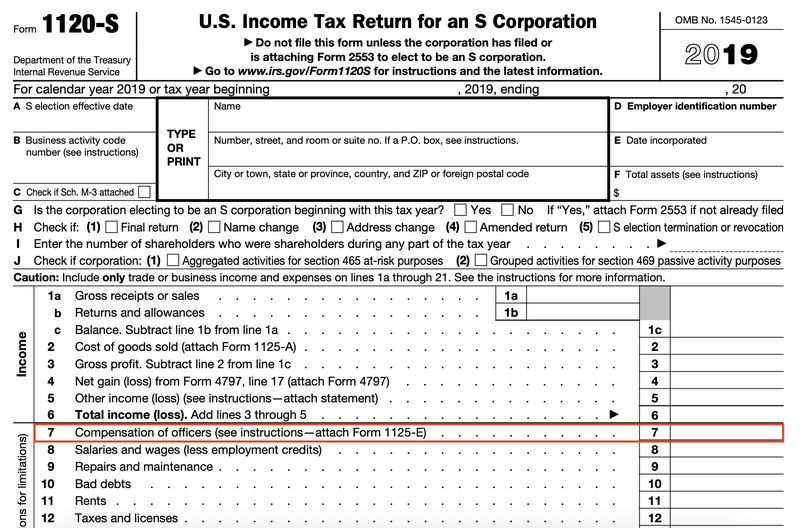 Remember how S corp shareholders can be employees? Don’t forget to deduct their W-2 wages on Form 1120-S.

S corporations must fill out Schedule K and Schedule K-1. Yes, they’re different. You start with Schedule K, a built-in section of Form 1120-S, to summarize the S corporation’s income, deductions, and credits to be passed on to shareholders.

The S corp’s total earnings get divided up on Schedule K-1. S corporations furnish a Schedule K-1 to shareholders, telling them the portion of S corp earnings for which they’re responsible to pay taxes on their personal returns.

Most S corps allocate shareholder earnings by ownership interest percentage, but they can come to a different agreement.

As an S corp shareholder, you pay income tax on two types of income — your salary and your portion of S corp earnings. You’ll often hear these referred to as W-2 and K-1 income, respectively. Both get reported on your personal tax return.

S corp shareholders should not go it alone when filing their personal taxes. I always make sure I’m not alone when I dare to peek at Schedule E in case I faint. Get a tax preparer or tax software to walk you through the filing process.

S corp status can save some serious silver

The S corporation tax structure has a lot to offer small businesses with active owners. Before you file your small business taxes next year, consider electing S corp status.

H&R Block recognized that people are interested in preparing their taxes themselves, so they offer both a downloadable application and an online tax preparation program easy enough for anyone to use.

TurboTax is one of the most recognizable names when it comes to tax software, with good reason. They offer a variety of plans ranging from free, for simple returns, to business, for corporations.

Though not a household name like its competitors, TaxSlayer is a worthy competitor in the online tax preparation category, offering four plans: Simply Free, Classic, Premium, and Self-Employed.

TaxAct Self-Employed is part of TaxAct’s suite of tax preparation applications that are available online, or as a download that can be installed on your desktop or laptop computer.

In the market for tax software for your small business? You came to the right place. The Blueprint reviews the top tax software applications to find out which one is right for you.

END_OF_DOCUMENT_TOKEN_TO_BE_REPLACED

Form 940 vs. Form 941: What’s the Difference?
IRS Forms 940 and 941 must be filled out to ensure you're paying employment taxes. We discuss the difference in each form and how to fill them out accurately.
By Ryan Lasker
3 Tips to Get W-9s From Vendors
A Form W-9 gathers information about a vendor for a business to prepare contractor tax forms. Here are tips for getting W-9s from vendors and when to ask for them.
By Ryan Lasker
3 Ways to Send Forms W-2 to Your Employees
The Form W-2 details employee earnings and is used when they file their individual income taxes. Here are three ways to send employees their Forms W-2.
By Ryan Lasker

TurboTax rated "Easiest to Use"

Find the TurboTax version that's best for you with their easy-to-use questionnaire.