A Beginner's Guide to the Six Sigma Methodology

Six Sigma provides principles and methods to improve work performance and drive leadership development. Use this guide to see if the Six Sigma process can benefit your organization.

With a name like 6 Sigma and certification levels that include yellow belt, green belt, black belt, and master black belt, it’s OK if your first thought is we’re talking about a super-secret martial arts fraternity. However, Six Sigma is a data-driven process to improve work performance that can benefit organizations and businesses of all sizes.

In this article, we’ll give you a crash course in the Six Sigma process, covering its origins, principles, and methodologies. We’ll finish with a step-by-step process for how your company can use Six Sigma techniques to level up your performance metrics and create leaders ready to mentor rising talent in the strategy.

Overview: What is Six Sigma?

When Motorola faced rising warranty claims in the 1980s, company engineer Bill Smith brought the idea of Six Sigma to then-CEO Bob Gavin. Six Sigma would use specific tools and methods to reduce process variations and, in doing so, minimize errors and improve customer satisfaction.

“Sigma” is a Greek symbol used in statistics to measure deviations from an average. Six Sigma uses a classic bell curve where the target outcome is in the center of the curve and the actual distribution of outcomes aims to deviate no more than three sigmas in either direction.

If outcomes fall within these six sigmas of the mean, then the process is considered to have a low defect rate. In other words, the Six Sigma methodology aims to have only 3.4 defects for every one million outcomes, or 99.99966% defect-free products.

By 1988, after implementing Six Sigma, Motorola became the first company to be awarded the Malcolm Baldrige National Quality Award. Since then, companies from retail to health care to banking have found success with the strategy.

Bank of America used Six Sigma to address customer complaints elevated to the executive level, which were numbering around 20,000 per year. The effort resulted in doubling the bank’s customer satisfaction metrics and over $2 million net financial impact.

While the profit focus of Six Sigma may make the approach seem applicable only to for-profit companies, nonprofits can also benefit from the process. Six Sigma can help nonprofits improve satisfaction levels, maximize the impact of their volunteers, or increase the number of donations they receive per appeal.

Akron Children’s Hospital in Ohio, for example, used Six Sigma to reduce the number of days it took to move food from its pantry to families in need from 92 to 40.

Friends of the Children in Portland, Oregon, found that staff had little time to mentor at-risk youth in the program, despite its being a key piece of the nonprofit’s mission. The organization used Six Sigma to review its project roadmap and internal processes to find administrative burdens and other elements cutting into staff time. This freed up hours for direct client services.

In a convenient twist of fate, six key principles guide Six Sigma methodology. Focusing on these principles, organizations can move closer to the six sigma level in their operations.

1. Focus is always on the customer

Six Sigma always focuses on the customer as it strives to improve constantly. Deviations from a target represent instances where an outcome falls outside a customer’s expectations.

This could mean producing error-free products to increase customer satisfaction with their purchase or ensuring on-time deliveries to bolster customer loyalty. For a nonprofit, it could mean minimizing administrative inefficiencies to reduce overhead so supporters know a greater percentage of their donations are going directly to your cause.

The customer is the ultimate “why” behind Six Sigma.

2. Improvement is a continuous process

While Six Sigma focuses on one area of improvement at a time, companies that embrace the strategy look constantly for new improvement opportunities. An organization adopts the ethos that ongoing improvement is vital to its work. As soon as one process reaches the six sigma level of accuracy, it’s on to the next performance improvement plan.

Errors are more likely to occur if different team members or divisions of an organization are performing a process differently. Six Sigma focuses on standardizing processes so it can reduce deviations from a target, which can result from varied methods.

For example, a business that provides quick oil changes for car owners might provide employees with a checklist that dictates the exact order each of a car’s fluids will be checked and replaced. By following that standardized process, an employee is less likely to forget to top off a customer’s windshield wiper fluid.

Six Sigma works to identify superfluous actions within organizational processes. These wasteful steps can increase the time to complete a task, the likelihood of error, and the overall cost of the process. By identifying and eliminating waste, companies can reduce defects and create happier customers.

Meanwhile, a line of customers waited for their turn. Instead of having multiple employees work each car, the business could empower each employee to run through the checklist on their own, enabling four customers to be served at a time instead of one.

Making progress within an organization feels great. But if only upper management at an organization is on board with the related changes, progress won’t be sustainable. Six Sigma stresses the importance of leadership development at all levels to ensure consistency across the organization and empower staff to be part of the change and embrace an improvement mindset.

To implement this, Six Sigma offers different “belt” levels to denote an individual's experience in the method. A company’s executive leadership team must identify the right talent for the right projects across the company’s hierarchy and give them the tools and support they need to become effective leaders as they move up the different belt levels. These levels include:

6. Define and control all processes

You can’t fix a problem unless you identify and describe it. All processes within an organization need to be documented and analyzed. This exercise will reveal where the organization can make improvements and how those improvements will be measured. It will also allow teams to control the process once the improvement has been reached to ensure it remains within the six sigma range.

Whether you’re looking to improve an existing process or develop a new one, you’ll follow one of two methodologies for implementing Six Sigma: DMAIC or DMADV, explained in more detail below.

These methodologies both incorporate a variety of techniques learned through Six Sigma training, such as:

DMAIC is used to improve existing processes performing below expectations. The methodology includes these components: 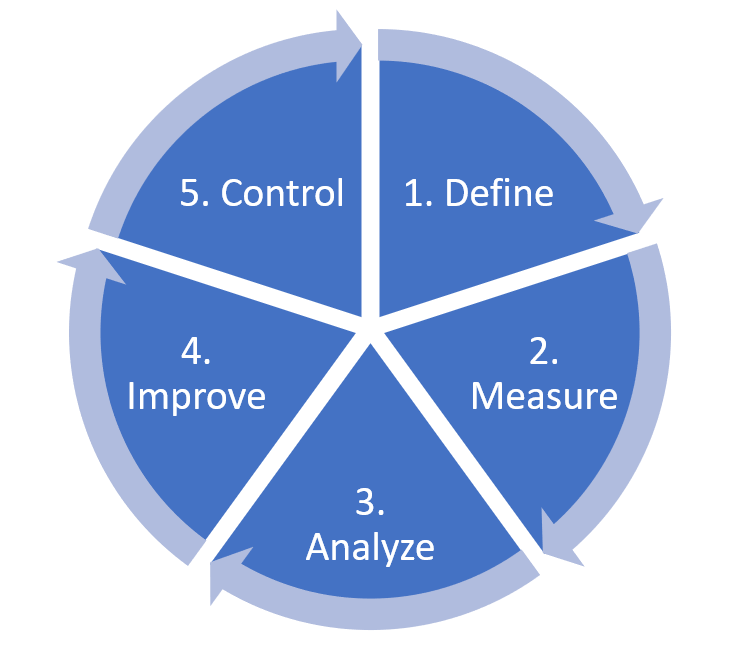 DMAIC is a methodology that can be used repeatedly for new initiatives as a part of your company’s continuous quality improvement.

DMADV is used to develop new processes that will launch and operate at six sigma levels. The methodology includes the same first three components as DMAIC but swaps the final two to:

With so many techniques, tools, and methods to consider, Six Sigma can feel like an overwhelming process to a beginner. However, if you’ve reached this point in the article, you’re well on your way to at least self-identifying as a Six Sigma white belt.

As you dive deeper into Six Sigma training, you’ll learn exactly when and how to use different tools or techniques. Overall, however, the process falls into four simple steps.

1. Align your team around your improvement goal

An organization’s executive leadership team reviews all improvement opportunities and identifies which would have the greatest impact on the company. Champions for those opportunities then set strategic goals to share with the wider team.

2. Mobilize your team to act on your goal

Six Sigma black belts lead the charge for advancing improvement projects. They identify the right people to enlist and move through the DMAIC or DMADV methodology. They constantly use data to inform their decisions and measure progress.

3. Accelerate your project toward results

4. Review and learn from the process

When an improvement is reached, executive leadership and Six Sigma team members should review how the process went, identifying best practices and areas for additional improvement. These will inform the team as it moves into the next target area.

Regardless of your organization’s size or industry, the Six Sigma method can improve your internal processes and drive better outcomes. This strategy relies on the people who implement it, creating excellent opportunities for leadership development among your staff. So, while it might not be a supersecret martial arts fraternity, Six Sigma still packs quite the punch.