When I noticed that, in addition to the tremendous wind and rain storm going on outside, it was raining in the kitchen of my modest vacation home, I immediately texted my contractor friend. He assured me that since the outside weather was so horrendous, it was probably just a minor problem -- something that could be fixed with a small repair.

When the weather cleared up enough for him to take a look a few days later, the reality was bleaker. He believed that the storm had damaged my roof enough that it would need to be replaced.

Before we let him do that, I did something that I had never before done in roughly 20 years of owning houses and condos -- I called my homeowner's insurance company. That was the easy part, and filing a claim involved nothing more than waiting on hold for a little while, then telling a nice woman what I believed had happened.

But that's where the easy part ended. 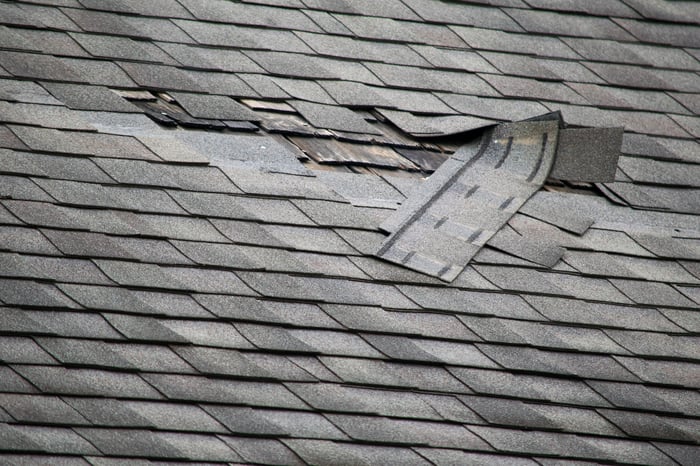 My roof was not quite this visibly damaged. Image source: Getty Images.

The tarp that never was

When you file an insurance claim over roof damage, it's typical for the roof to be covered in a tarp in order to prevent further damage. The person who took my claim actually offered to have a company sent out immediately to place one on my roof.

Unfortunately, I told the person on the other end of the line that the roof may have some spots that were dangerous to walk on. That meant the normal tarping process couldn't be used, and instead a truck with a lift would have to be called in -- something that costs hundreds, maybe thousands of dollars that my insurance company was unwilling to pay for (or at least unable to make a quick decision on paying for).

None of this was ever communicated to me. Since this is not my primary residence and I had received a call from workers who were allegedly on their way to place the tarp, I simply assumed it happened. It never did. And my contractor -- a man experienced in how insurance claims work -- had to check on the property daily to make sure my leak did not get worse.

Not long after I filed the claim, I received a call from a "Field Claims Adjuster," the person who would be inspecting my roof and deciding whether the insurance company would pay out. This call took place on June 6, and she promised to visit the property as soon as the weather cleared up to do her inspection.

Since I do not live there permanently, I gave her access to our lockbox to inspect any inside damage. I also had my contractor send me pictures of the roof before he examined it and ones detailing everything he had done to it. These were passed on to the adjuster as well.

Weather was not our friend in this process so, for weeks, nothing happened. Eventually I was told that due to the fact that the roof might be dangerous to walk on -- a "fact" I was only guessing at initially -- an outside adjuster would have to do the report.

That happened eventually, but only after many weeks of being told "it would happen any day now." It then took the original adjuster another week to get the report, which was "lost" somewhere along the way.

In the first call with the adjuster she listed all of the reasons for which my claim might be denied. Basically, normal wear and tear were not covered; my claim would only be approved if the adjuster believed a weather incident caused the damage. She also asked for before images prior to the damage, and a timeline as to when the damage occurred.

Since I don't generally take pictures of my roof, all I could tell her was that we had it informally inspected before we bought the property a year before. I also shared again that I first noticed a problem when it started raining indoors, which had only started during the most recent storm.

It felt to me like I was being set up to be told that the insurance company had no liability. In reality, I was hearing a standard speech similar to the one doctors deliver to expecting mothers listing all the things that could go wrong during delivery.

The call comes in

When my phone rang on July 23 -- roughly six weeks after my first discussion with the adjuster -- she told me that there was some preexisting damage and some that had been caused by wind. I fully expected that would mean our claim had been denied or that we would get a small payout that did not dent the cost of a new roof. Instead, she told me that the proof of wind damage was enough to approve our claim.

That sounds good, but the reality was a lot bleaker. The insurance company paid for the cost of the new roof, but minus our $1,000 deductible, and minus depreciation for the wear and tear on the roof since the home was built in 1999.

That's better than nothing, and it's more than I paid the insurance company last year, but it's still a bit disappointing. I got insurance to cover myself in case of unexpected damage. In this case, that only partially worked, and I'll most certainly look at a revised policy when my renewal comes up in a few months.