Please ensure Javascript is enabled for purposes of website accessibility
Log In Help Join The Motley Fool
Free Article Join Over 1 Million Premium Members And Get More In-Depth Stock Guidance and Research
By Glassdoor - Dec 5, 2017 at 11:47AM

Small cues can tell you everything you need to know about how your job interview went.

If there's one thing that drives people crazy when applying to jobs, it's the uncertainty. Of course, you always want to get a job offer, but if recruiters give you prompt feedback on your application status -- even if it's negative -- you can generally deal with it pretty well. Those days after an interview where you aren't quite sure where you stand, though, can be simply maddening -- especially if you feel like you did a pretty good job.

While you'll probably never be able to tell with 100 percent certainty which way a recruiter is leaning, there are a few signs you can look out for that indicate good news. So the next time you get the urge to pester your recruiter or agonize over a mental play-by-play of the interview, take a breath and simply reflect on whether these nine good omens were present. 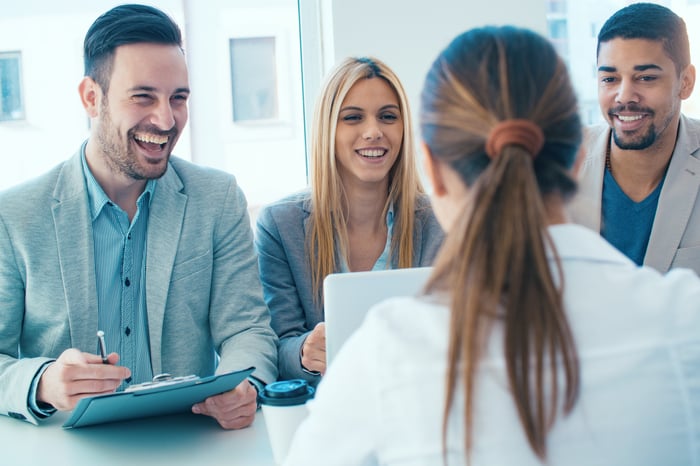 Interviewers try not to get candidates' hopes up, so they'll often speak in generalities like "the person in this position would do XYZ," or "if hired, you would start at this time." But if they strongly believe that you're the right person for the job, it may unintentionally come across in their word choice.

"Language like, 'this is where you'll be working,' or 'our receptionist will help you get settled after HR training,' are strong indicators that they are thinking about you as the person who fills the position," says April Klimkiewicz, career coach and owner of bliss evolution. "Listen for verbal cues like this that strongly indicate they are envisioning you working there."

2. Their body language gives it away

On a similar note, even if an interviewer is trying to play it cool, their body language may hint at their enthusiasm for you as a candidate.

"Head nodding, foot movements, agreeable 'mhmms' and other noises are sure signs that they want you," says Valerie Streif, Senior Adviser at Mentat. "People don't realize how much of their inner thoughts and opinions they give away from these little movements!"

The meat of an interview is going to be all business -- after all, that's how an interviewer determines whether or not you're well-suited for the job. But if, after that, things veer toward the conversational, that's a great sign.

"If at some point the hiring manager stops talking business, and the interview turns more into a casual, friendly conversation, it's a sure sign the hiring manager is impressed," says Matthew Kerr, career advisor at Resume Genius. "It shows they are already satisfied you are qualified to perform the job, and now have a genuine interest in getting to know you better, in hopes you will join the team."

Sometimes, your interviewers might be so clear-cut as to straight up tell you that you've got the skills and experience they're seeking.

"[If] you ask, 'What does your ideal candidate for this position look like?' at the end of the interview, and they answer with 'Well, when you talked about [a specific project or attribute], you summed it up. That's exactly what we're looking for...' this is a strong indicator that they think you're an excellent fit for the role," Klimkiewicz says.

It might be exhausting to be introduced to team member after team member during a marathon in-person interview, but rest assured, this bodes well for your candidacy.

"For me, one of the top signs that you nailed the interview is the interviewer grabbing other people to talk to you while you're there or booking you to talk to other people before you leave,"  says Jill Santopietro Panall, HR consultant and owner of 21Oak HR Consulting, LLC. "If it does happen, I would think it's because the interviewer really likes you and wants to get other decision makers to weigh in."

If interviewers go from making you prove that you're a good fit for the job to highlighting all the great things their company has to offer, you know that you're in their good graces.

"Once they've made their decision that they want you to work there, they switch gears completely and try to sell the company to you, so that in case you've interviewed at multiple places, you'll choose to take their offer," Streif explains. "This is also a clear sign because if they didn't want you to work with them, why would they spend more time in the interview then they'd need to?"

7. The interview runs over

Along the same lines, the interview taking longer than expected in general could be a sign that you passed with flying colors.

"Not everyone has spare time after the interview, but if you know they're cutting into their lunch break just to talk to you a little while longer, that is a sign that they think you would be a good fit for the role and want to get to know you even better," Klimkiewicz shares.

Keep in mind, though, that this is largely context dependent -- if you're running over because the interviewer keeps rephrasing the same questions over and over, for example, they may feel you're not giving clear enough answers. But on the other hand, if they seem genuinely enthusiastic and excitedly dive into a variety of topics, that's probably a good thing.

8. You get details on next steps

Obviously, if someone says something like "we'll reach out next week with an offer," you've got it in the bag -- but next steps don't have to be that specific to suggest interest from the employer. If, for example, "the hiring manager shakes your hand with a smile, and says something along the lines of, 'We'll be in contact with you soon,' it shows they are eager to hire you," Kerr says. "On the other hand, a phrase such as, 'We'll get back to you,' usually expresses disinterest."

9. Your follow-up emails get an immediate, positive response

Interviewers are usually meeting with a number of people, most of whom will send them a thank-you email right after the interview. Realistically, interviewers don't always have the bandwidth to promptly reply to those notes, especially if they're from candidates who were less than compelling. So if they take the time to respond to yours quickly and graciously, that may signal interest.

"Nowadays, it's common courtesy to send an email to thank the hiring manager for the interview. If they respond quickly to your email and thank you in turn for coming in, get your pen ready to sign a contract," Kerr suggests. "Not only does it show they were impressed with you, but [also that] they are interested to the point where they dropped what they were doing just to respond to you."