The first time I ever learned that crying at work was less than ideal was during my freshman year of high school. My English teacher started class, stopped suddenly, turned around, and gathered her emotions while saying, "I'm sorry, this is so unprofessional."

A few kids giggled. Others looked worried. Some didn't seem to care at all. I wasn't sure what to think, but what I learned that day was crystal clear: Crying at work is a big no-no.

People have debated the acceptability of crying at work for ages. Among the headlines Google delivered when I typed in "women crying at work" were multiple variations of a question if it's OK to do, hot takes on why women cry at work, and the one that made my stomach drop: "How to cry at work (without losing respect)." 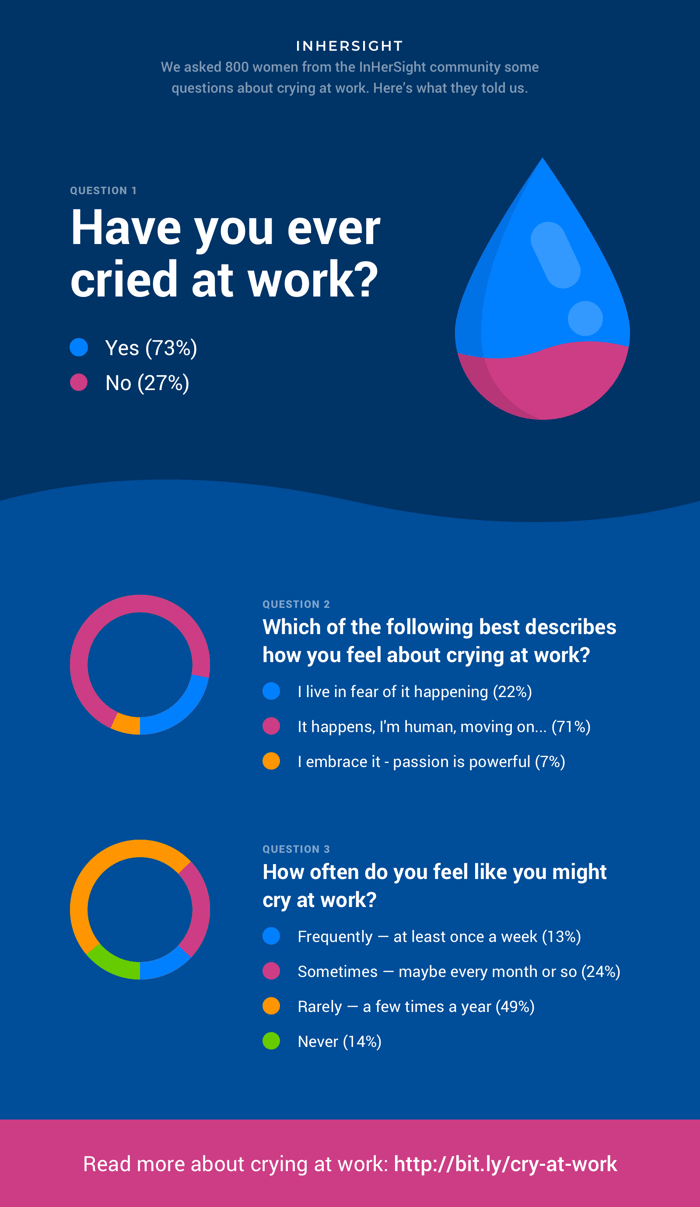 Women hear this advice over and over, so naturally, we follow it. The first time I cried at work was only a few years after I saw my English teacher cry. I retreated to a closet in the stock area of the grocery store I worked at, called my then boyfriend, and returned to work after a stop in the bathroom to check my mascara. I never let anyone know what had happened. In fact, there have been only two occasions where anyone has actually seen tears on my face in the workplace: once after my mother died, and once after my friend and colleague died. Both times, I tried to escape before the tears fell.

It leaves me wondering if grief is the prerequisite to even coming close to accepting our own emotions in the workplace. Surely we've all experienced the cleansing power of a good cry. Why, then, can't we allow ourselves to express emotion when we need to? What are we so afraid of?

I put out a call on social media for women to tell me their stories -- which I expected to be horrible -- about a time they had to cry at work. It turns out a lot of our thoughts on crying at work are completely wrong.

I know some amazingly strong women. While I know many of them tend to be more emotionally vulnerable -- a trait I've recently developed and am working on embracing -- there are some who I know are the ones who keep it together. I could never picture them breaking down in front of a boss or colleague.

Well guess what, folks? They've cried at work, too.

Take Kristen, who told me about her incredible struggle shortly after starting at a new job and getting married. She was pregnant and miscarried at 10 weeks. After a series of emotionally draining phone calls, she sought refuge in her boss's office when she was out to lunch so she could cry without anyone seeing.

Then there's Emily, who had to make the difficult decision early in her career to leave a job she wasn't passionate about or well-suited for. To make matters worse, she absolutely loved her colleagues and hated having to leave them. While handing in her resignation, she broke down in tears.

Elizabeth was criticized in front of her students and made to question her entire career choice. Once her class left, she closed the door and cried. Later in her career, she was informed she wouldn't be rehired due to budgetary reasons. Again, she shut her door and cried.

I'd never heard any of these stories, and hearing that these strong, powerful women I admire had such strong emotions showed me how none of us are alone.

You have more support than you think

We fear a loss of respect and power. While in some cases this might be true, it is far from a standard rule. Kristen heard a knock on the door when she was crying. Her coworker was looking for her boss, who happened to be a few steps away returning to grab the wallet she had forgotten. While many might assume the two women would judge Kristen, she found them to be incredibly supportive. Her colleague even confided in her about her own struggle with fertility, and was able to help her through an unimaginably painful experience.

Another woman who was surprised by her support system is Millen. After undergoing a hysterectomy and dealing with the effects of hormone drugs, Millen was extremely emotionally vulnerable. She told me her emotions caught up with her one day at lunch, explaining, "My sandwich fell apart, and so did I." Her colleagues saw her crying, gathered around her, helped her clean up, and helped her laugh at the situation.

Support can also shine through in indirect ways. A few days after an employee had given Veronica her resignation, she came to work asking for her job back. Veronica had to tell her it wasn't possible. The employee returned with her mother, who berated Veronica, while Veronica tried to keep it together. After they left, she excused herself to the back of the store, where she cried. Coincidentally, Veronica had spoken about this with her boss earlier, who confessed she too had cried the first time she had to fire someone. That story left Veronica with a feeling that she wasn't alone.

It's just one way of coping

The most incredible thing I realized through all of this is ultimately, crying is just one way people cope with pain, stress, anger or other tough emotions.

"Some people yell, or do more aggressive things when they've had it at work," my friend Lisa said. "I just cry." That point really stuck out to me. How many times have we seen someone yell when work gets stressful? How many times have we accepted that they are just having a bad day? Why can't we view a more productive and less harmful emotion in the same way?

Crying is a coping mechanism -- nothing more, nothing less. It doesn't show weakness, or incompetence, or an inability to handle high-stress situations. If anything, crying shows emotional awareness and the willingness to experience those emotions and then move on from them.

I've been told to "never let them see you cry" probably as many times as I've been told that "sometimes you just need a good cry." Talk about contradiction!

So here's my advice to you, ladies: Cry at work and talk about it. You don't have to make a scene in the boardroom -- cube walls can often be a blessing -- but you also don't have to wear stoicism as a badge of honor. Let's start giving our emotions the respect they deserve. After all, the ancient proverb says that before we can see properly, we have to shed tears to clear the way.

I Asked Some Women If They've Ever Cried at Work. Here's What I Learned @themotleyfool #stocks Next Article
Current