Are you in the market for a new car? Make sure you do these five things before you ever sign up for a new loan.

The car industry
As 2014 continues to plug along and the American economy continues to gain steam, many Americans are now searching for new cars. Experian, in its State of Automotive Finance Market, noted last year continued to mark a rebound for the automotive industry, as loan balances grew 11% on the year to $798.5 billion, which was the highest mark since 2007.

One of the reasons behind this gain is the growth in car sales, which stood at 186 million in 2013, which was almost 50% higher than the levels seen in 2009. However this number was still well below the industry standard seen in the years before the financial crisis: 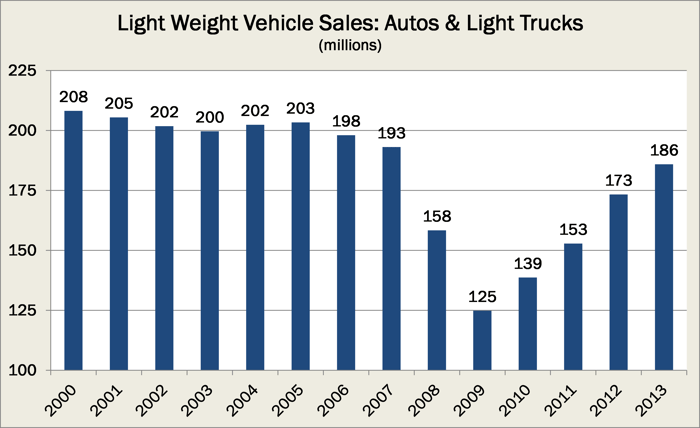 And while there are clear signs of a rebounding automotive market, Polk, a research firm, found in recently the average age of passenger cars and light trucks on the road in 2013 reached a staggering 11.4 years, well above what had been the historical case:

Yet with many Americans now more comfortable with making a big purchase -- for the average American, a transportation costs are the second biggest monthly expense -- there are five things you should absolutely do before a loan is taken out to buy a car.

1. Consider what you can afford
As with any major financial decision, sit down and review your personal finances to ensure you make the right decision as to how much you can afford. The average American spends 17.5% of their income on transportation.

Also be sure to remember with the purchase of a car, there are also taxes, insurance, and maintenance expenses (unless it's new and under warranty) -- so simply thinking about the monthly payment can lead to big trouble.

2. Review your credit
In addition to affordability, check your credit score -- remember it can be done once a year for free -- to ensure the numbers the financial firms pull on you is accurate. Correcting any mistakes or errors in your credit report could lead to a lower rate, and it will also help guide what you can expect your interest rate to be.

3. Shop around
Just like it's important to consider different makes and models, consider different lenders for the purposes of financing a vehicle. While the difference between a 4% rate and a 6% rate doesn't sound all that significant, it means more than $1,000 more in interest payments over the course of a 5 year loan on a $20,000 car.

4. Don't only think about monthly payments
One thing many lenders offer is the ability to get you any car at any monthly payment. For example, it may sound appealing to drop your monthly payment by $55 on a $20,000 loan financed at 5% by going from a 5 year loan to a 6 year loan, but it also means you'd pay nearly $550 more in interest over the lifetime of the loan:

In addition, consider most new cars lose around 40% of their value within the first three years. That means making a lower monthly payment could ultimately result in you owing more than what the car is worth, which always a little scary. Of course, if you plan on owning the car well beyond when it's paid off and you stop making payments that reality won't matter much, but it's still something to keep in mind.

5. Understand the total terms of the deal
As a final consideration, always be sure to carefully read through the paperwork before any deal is signed. While you can trust your dealer, make sure you see any verbal agreements are reflected in the written contract which you ultimately put your signature on. And as always, if anything gives you hesitations, seek out the opinion of experts, and don't feel rushed into making a decision on a major purchase.

There are other things you can do when making a car purchase -- but these five are critical when you're in the market for a new car.