Please ensure Javascript is enabled for purposes of website accessibility
Log In Help Join The Motley Fool
Free Article Join Over 1 Million Premium Members And Get More In-Depth Stock Guidance and Research
By Matthew DiLallo - May 28, 2016 at 9:00AM

The best MLPs have these three things in common.

Master limited partnerships were once thought to be the safest way to invest in the energy sector because these companies typically had limited exposure to commodity prices. However, it turned out that MLPs needed to do more than just have limited exposure to sail through the downturn unscathed. In fact, I've uncovered three characteristics that are present in the MLPs which have performed the best during the downturn. Here are my tips for uncovering these characteristics, so you can make a lot more money investing in MLPs.

Tip No. 1: Stick with the top investment-grade companies

While MLPs in general have sold off over the past year, some have dropped by a much more significant amount. We can see that in the chart below, which shows that Enterprise Products Partners (EPD 1.07%) and Magellan Midstream Partners (MMP 0.88%) haven't sold off nearly as deeply as Plains All American Pipeline (PAA 2.85%) and Energy Transfer Partners (NYSE: ETP): 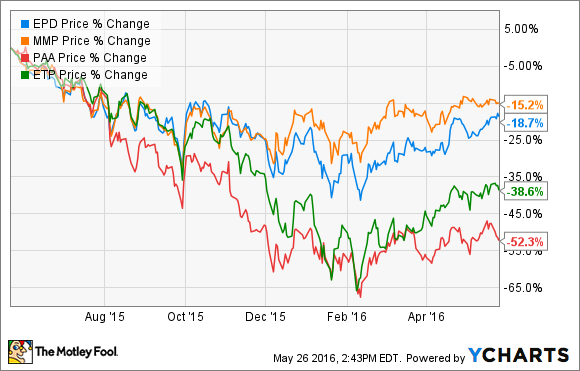 One reason for this relative outperformance has to do with the balance-sheet strength of both Enterprise Products Partners and Magellan Midstream Partners. The MLPs boast having the highest credit ratings in the sector at Baa1/BBB+. Meanwhile, Energy Transfer Partners and Plains All American Pipeline have investment-grade credit ratings of Baa3/BBB- and Baa3/BBB, respectively, but those ratings are at the lowest end of the investment-grade scale. Those weaker credit ratings have played a role in both companies' struggles to raise attractively priced capital during the energy-market meltdown.

Tip No. 2: Put a priority on fee-based assets

Another very important criterion for an MLP is to make sure that it derives the bulk of its cash flow from fee-based assets. In this quartet, Energy Transfer Partners leads the pack, as 90% of its gross margin this year is derived from fee-based assets. It's followed by Enterprise Products Partners and Magellan Midstream Partners, which are both at 85%, while Plains All American Pipeline rounds out this group at just 78%.

That said, despite Energy Transfer Partners' perceived strength, the company has really struggled over the past year due to direct exposure to commodity prices within its midstream segment. The company's distributable cash flow has slipped over the past few quarters as a result of weaker earnings from processing natural gas. Plains All American Pipeline, likewise, has experienced pressure to its cash flow due to its exposure to commodity prices. Last year, for example, its adjusted EBITDA declined to $2.168 billion, down from $2.2 billion in 2014, due to negative impact from commodity prices, which the company wasn't able to fully offset with growth projects that went into service.

Tip No. 3: Make sure it's retaining cash flow

The primary reason this rather limited exposure to commodity prices has had a bigger impact on the unit prices of Energy Transfer Partners and Plains All American Pipeline really boils down to their distribution policies. Both companies have made it a policy to pay out nearly all of their distributable cash flow to investors each quarter, which is a problem when that cash flow is being impacted by commodity price exposure. In fact, last quarter both companies paid out more than they brought in, as evidenced by distribution coverage ratios of 0.86 for Energy Transfer Partners and 0.96 at Plains All American Pipeline. This forced both companies to borrow money to meet their commitments to investors.

Contrast this with Enterprise Products Partners, which has maintained a coverage ratio of 1.4 over the past five years, enabling it to retain $5.1 billion in cash since 2011 that it reinvested in growth projects. Magellan Midstream Partners, likewise, retains a lot of its cash flow, with the company's coverage ratio also at 1.4 last year, with expectations that it will be 1.2 this year.

This last characteristic has been the biggest difference between MLPs which have been crushed during the downturn and those which are largely staying afloat. Because Enterprise and Magellan Midstream are retaining cash, neither have had to resort to funding growth projects with asset sales or exotic financial instruments, which have been the respective funding sources of Energy Transfer Partners and Plains All American Pipeline during the downturn.

Not all MLPs are the same, so follow these three simple tips before investing money in an MLP. It's the best way to not only make more money in the sector, but also to avoid investing in what could turn out to be a loser.