What: Shares of frack sand suppliers U.S. Silica Holdings (NYSE:SLCA), Fairmount Santrol Holdings (NYSE: FMSA), and Hi-Crush Partners (OTC:HCRS.Q) all gained more than 15% in May as oil prices gave the entire energy sector a much-needed boost. Those increasing oil prices also helped to give some ratings companies a little more confidence as all three of these companies also received recent stock upgrades. 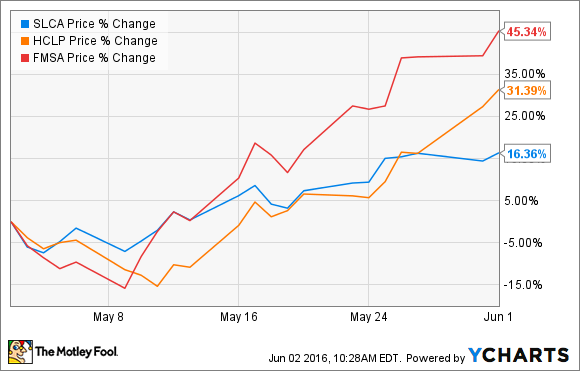 So what: What a difference a few dollars make. After all three companies reported less than stellar results earlier last month, and the U.S. rig count continues to set new record lows on a weekly basis, there haven't been many reasons to be optimistic about what would be coming down the pipe over the next several months. All it seems to take is a week or so of oil prices flirting with $50 a barrel to breathe a little more life back into these companies.

In the past two weeks, U.S. Silica, Fairmount Santrol, and Hi-Crush Partners received upgrades from RBC Catpital, Morgan Stanley, and Credit Suisse, respectively, and all of these moves happening after May 23 goes to show that these ratings agencies seem to be putting a lot faith into higher oil prices. After all, there haven't been many other signs that this price increase will lead to increased drilling activity anytime soon.

Now what: Calling the stocks of these companies "volatile" is probably an understatement. The past couple of years have been a real wild ride that would be enough to make any investor lose their appetite. In the shorter term, there isn't a whole lot of incentive to invest in these companies now. Rig counts are still on the decline, which suggests this slight increase in oil prices has not yet been enough incentive to go out and bring more oil and gas to market. At the same time, both Hi-Crush and Fairmount Santrol are grappling with rather burdensome debt loads that will keep dragging on profitability even after the industry picks back up again.

The one promising thing investors can look at over the long term is that shale drilling and hydraulic fracturing appear to have cemented roles in the oil and gas market. Producers have been able to make the process much more economical to the point that it will push other higher prices, and the total sand used per well has increased drastically since we started to make hydraulic fracturing a commercially viable production source.

When we do see a pick up in demand for drilling activity and, in turn, frack sand, these companies' prospects could rise very quickly. The biggest question today is which companies will be able to keep hanging on through this brutal downcycle.