So What: All of the companies mentioned here pretty much do the same thing: They own and contract out equipment to producers. Nabors and Helmerich & Payne are much more focused on onshore drilling rigs, Transocean, Ensco, and Noble only own offshore drilling rigs, and Tidewater owns a fleet of marine support vessels that perform various duties for rigs. The reason that all of them are rising on Monday is that with the increase in oil prices, it may start to incent producers to rent out equipment and start to drill for oil and gas again.

There are two concrete reasons to think that this is going to happen in the coming months. The first was from Transocean, which announced late last week that the company had secured a 720 day contract with ONGC to drill off the coast of India. While the contract of $127,000 per day is much, much lower than the previous contract for the same rig, it's certainly better than keeping the rig in a harbor somewhere burning cash.

The other promising bit of news is from Helmerich & Payne, which said in a presentation on Monday at the RBC Capital Markets Energy and Power Executive Conference that it has seen more inquiries from Exploration & Production companies now that oil has remained above $45 per barrel.

This news couldn't come at a better time, because the market for both onshore and offshore rigs have been hurt just as much if not more than the producers themselves. The U.S. land rig count -- a metric most relevant to Helmerich & Payne and Nabors -- has hovered around 400 active rigs. That is the lowest amount of active rigs in recorded history. Things haven't been much better for offshore companies, as Transocean, Ensco, and Noble have all seen several rigs roll off contract without new jobs to take. Furthermore, these offshore rig companies are in the middle of major fleet turnarounds that has involved shedding several older assets to make room for their newer, higher specification rigs under construction. 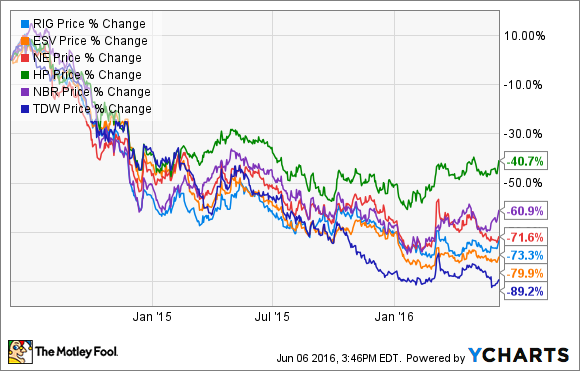 Now What: Whether or not this recent price spike is sustainable is anyone's guess. On any given day news from various parts of the world could change the daily price enough to send these stocks rocketing in either direction. For long term investors, the thing to focus on here is the company's ability to withstand even longer periods of weak demand.

Chances are that land rig companies will benefit sooner from higher prices since they tend to run on shorter length contracts and the amount of money to bring a new shale well online is much lower than an offshore well. But the overarching theory is that the longer lower prices stick around, the lack of investment in the industry will catch up to it and we can expect these equipment lessors to see an uptick in activity.