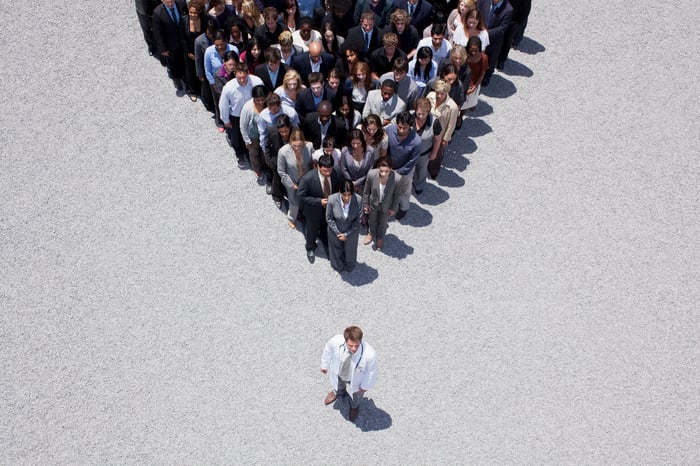 The healthcare sector as a whole is somewhat insulated from overall economic downturns, especially compared with energy and consumer goods. Add in the rising demand for healthcare services in developed nations with aging demographics, and it's a sector that demands attention.

Practically any well diversified portfolio should include some exposure to healthcare, but choosing from the cornucopia of available options isn't easy. No single pick is perfect for everyone, but we asked three of The Motley Fool's healthcare analysts which stock they would choose if they were limited to just one. Here's what they had to say:

Cheryl Swanson: You probably know the nation's largest insurer, UnitedHealth Group (NYSE:UNH), by name. But you may not realize that UnitedHealth has boosted sales every quarter for 15 years. That's 60 straight quarters of growth, averaging 16% yearly.

Is the giant insurer's run over? You be the judge. In the past 12 months, UnitedHealth achieved $1.57 billion in sales, a 20% jump from the previous year, which rang in at $1.31 billion.

This amazing growth in such a stodgy industry is due to UnitedHealth's core set of health-service businesses, which fall under the Optum banner. By acquiring pharmacy-benefit manager Catamaran last year, Optum expanded its pharmacy-benefit business, which gives it a way to hold costs down and boost profitability. Meanwhile, Optum also spent the past decade buying health IT start-ups, which continues to pay off as healthcare dives headfirst into analytics and Big Data. The result is that Optum has powered revenues up a stunning 54% in the past 12 months, fueled by a 72% jump in the pharmacy-benefit segment.

Should investors be worried about UnitedHealth's recent decision to back out of Obamacare? In the last earnings call, CEO Stephen Hemsley said the company will be cutting back on the exchanges to "focus on only a handful" of states. I'm not worried. Truth be told, UnitedHealth has always been an implacable foe of the Affordable Care Act, and its ACA business has never been significant relative to its overall business.

Past success guarantees nothing, but UnitedHealth's multiple lines of business and its unmatched Optum division should keep making this stock a huge winner for shareholders for many years.

Brian Feroldi: With 10,000 baby boomers turning 65 each day, the demand for healthcare is almost certain to rise over the coming years. That fact is putting a lot of pressure on our current system, which is a big reason spending on healthcare continues to rise at a rapid pace.

One company that's helping to keep healthcare costs in check is CVS Health (NYSE:CVS), the nation's largest pharmacy chain. While the company is helping its customers save money on healthcare in a few different ways, two of its growing business have me particularly excited and make me believe this is a great stock to own for the long term.

CVS Health is currently in the process growing its network of in-store MinuteClinics around the country. These walk-in clinics offer patients access to basic medical services seven days a week, without the need to book an appointment. Not only are these clinics incredibly convenient but they're also low-cost, which makes them a home run all around. Patients save time and money by using these clinics, saving them a trip to their doctor's office, and CVS Health benefits by potentially bringing new customers to its stores.

Last quarter, revenue from its MinuteClinics jumped a strong 17.7% year over year, and that's despite having a very mild flu season. Results like that are big reason management continues to invest in adding new clinics to its network. The company has just over 1,100 clinics up and running right now, but plans on pushing that number to over 1,500 in the next few years.

Beyond its retail empire, CVS Health also operates the second largest pharmacy-benefit management network in the country. In exchange for a small fee, CVS uses its immense buying power to help employers, health insurers, governments, and other health-benefit program sponsors to keep their pharmacy costs as low as possible.

CVS Health's pharmacy-benefit management business is hugely successful, and it's saving its customers a boatload of money. The company estimates that it has saved its clients more than $6.4 billion over the past five years, which is a big reason it boasts a retention rate north of 97%.

CVS is able to keep its customers' costs down by using generic medication whenever possible. Last quarter, more than 85% of the drugs that were dispensed to its PBM customers were generics, which was up 170 basis points over the same period a year ago. With more generics coming on the market every year, this number is bound to tick higher, saving its 80 million members a ton of money.

The healthcare sector is always changing, but I'm pretty sure companies that help to keep the cost of healthcare down will always be in high demand. That's why I think CVS Health is a good choice for any investors who want to put money to work in the healthcare sector.

Cory Renauer: While I think Brian is spot-on about aging demographics and rising healthcare demand, if I had to pick just one stock in the sector to buy and hold forever, I'd go with the biggest of them all, Johnson & Johnson (NYSE:JNJ).

Political reform may alter the profitability of insurers and pharmacy-benefit managers, for better or worse, but margins on Band-Aid and Q-Tip sales are less exposed. J&J practically invented the consumer healthcare goods industry in the 19th century, and it still produces steady earnings growth from some of the best-recognized brands on the planet.

Johnson & Johnson's keen eye for potential continues to produce results through its biopharmaceutical segment. A prime example began in 2011, when Pharmacyclics jumped at the chance to collaborate with J&J over late-stage development and commercialization of what became cancer therapy Imbruvica.

Through an FDA label expansion in March, and more recently in the EU, Imbruvica is now available as the first treatment for the most common form of leukemia, allowing these patients an alternative to chemotherapy.

AbbVie purchased Pharmacyclics just over a year ago for about for $21 billion to get its hands on Imbruvica. By recognizing the opportunity early, J&J risked just $150 million upfront for its portion of Imbruvica sales, which in the first quarter more than doubled to $261 million. With the new label expansions, I wouldn't be surprised if quarterly Imbruvica sales double again by the end of the year.

A more recent example of J&J's keen eye for potential winners is Darzalex, a first-in-class treatment of multiple myeloma, with peak annual sales estimates of $5 billion. Back in 2012, Johnson & Johnson risked about $135 million upfront in a collaboration deal with Denmark's Genmab to develop this game-changer.

It's difficult to quantify J&J's ability to recognize potential winners, but my favorite two figures are consistent stock price gains above the benchmark S&P 500 and 54 consecutive annual dividend increases. In healthcare, or any sector, this is one stock everyone should have in their portfolio.