Stocks soared on Thursday, completing an epic three-day run that put indexes almost back to where they stood before Brexit selling overwhelmed the market last week. 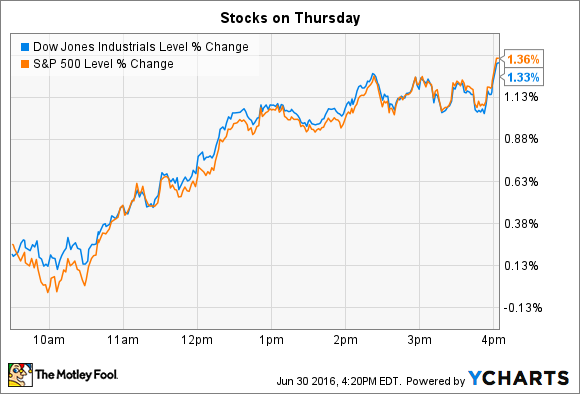 Hershey gets a $23 billion buyout offer

Sweets specialist Hershey spiked 21% to a new all-time high after The Wall Street Journal reported that the company has received a $23 billion buyout offer from Mondelez (NASDAQ:MDLZ). Hershey later confirmed the news, saying Mondelez had offered to pay $107 per share for its business through a mix of stock and cash. Executives were clear that those terms were a non-starter, though. Hershey's board of directors "unanimously rejected the indication of interest and determined that it provided no basis for further discussion," they explained in a press release .

So why did the stock continue trading higher, even above the quoted buyout price? In short, investors are betting that Hershey's rejection isn't the end of this matter.

Mondelez could sweeten its preliminary offer, for example, which seems likely given the initial report. The Journal described Mondelez leaders as highly motivated to achieve the merger that would create the world's biggest candy company. If that's the case, a higher-priced offer, or one that includes a bigger proportion of cash, could be on the way.

Alternatively, other snack and confectioner companies might be spurred by this news to put in their own bids for Hershey. While either scenario suggests the stock could rise from here, I'd be happy watching this play out from the sidelines and wouldn't start a new position in Hershey simply in hopes of a bidding war breaking out.

Wine and beer seller Constellation Brands rose 4% to set a new all-time high following its latest set of strong quarterly earnings numbers. Double-digit sales growth was powered by huge gains in the beer business as the Modelo and Corona brands stole more market share in the U.S. even as average prices rose. Those successes contributed to a 19% revenue spike for the division, compared to an 8% boost for the wine portfolio . Free cash flow more than doubled to $177 million.

Operating margin also rose by 2 percentage points to reach 29% of sales, which translated into 24% higher net income for the quarter. CEO Rob Sands credited the company's "best in class marketing and sales execution efforts" across its core, mid priced, and premium brands for the strong results.

Constellation made progress at boosting its beer production capacity and executives see that segment as driving profitable growth over at least the next few quarters. Sands and his team affirmed a full-year outlook that calls for 14% higher earnings on double-digit sales growth, showing why the stock has earned a healthy premium over less profitable (and slower-growing) wine and beer rivals.