What: Shares of land rig contractors Nabors Industries (NYSE:NBR), Helmerich & Payne (NYSE:HP), Patterson-UTI Energy (NASDAQ:PTEN) and Precision Drilling (NYSE:PDS) all saw gains of more than 10% in June. The biggest culprit for this change seems to be oil and gas prices staying in that $45-$50 per barrel price range. 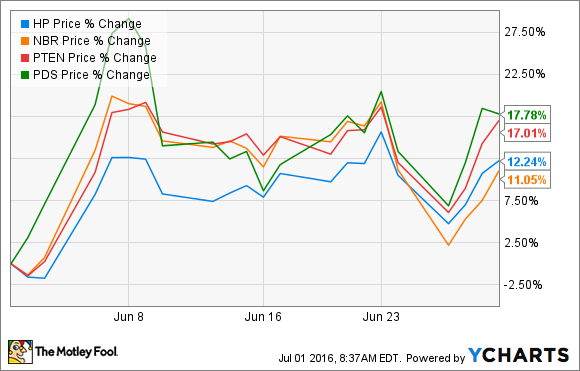 So What: The knee-jerk reaction to these stocks rising is that oil prices rose in this past month. There is a distinct difference between the success of these companies and oil prices, though. To actually see their business prospects improve, producers must also be willing to drill for oil and gas at today's prices. Based on some of the conversations these companies have been having with their customers, that could be coming soon.

During Helmerich & Payne's most recent investor events, management has said numerous times that it has fielded several phone calls from its customers about the possibility of putting a new rig to work. None of these conversations have materialized into new contracts yet, but it's a slight indication that the market for rigs is just about ready to see some improvement. That turnaround is very much needed. Based on the utilization rates from each of these companies, they could all use the work:

Unlike their offshore counterparts, land drillers have been more responsive to the decline in activity by scaling back their capital expenditures, particularly Patterson-UTI Energy and Helmerich & Payne. Precision Drilling and Nabors entered the downturn with some debt issues, but the situation hasn't become worse as of late, either:

Now What: When producers do start to drill for oil again, chances are they will look to shale as the first source of new oil. It takes a lot less capital and less time for a shale well to go from the drill bit hitting the ground to full production. This makes shale drilling a much more attractive way of investing today than spending billions on a long-tail project that will take years to bring online. This means when the market demands that we drill for new oil, chances are these companies will benefit immensely and almost immediately.

For the most part, Helmerich & Payne and Patterson-UTI Energy have kept their balance sheets in order during the downturn so they won't need to spend too much time servicing debts before returning capital to shareholders. Nabors and Precision, on the other hand, will likely need to do a little bit of paying down debt before they will be in the same position to reward shareholders.

For investors, there isn't a huge rush to jump into these stocks today. According to the management teams of these companies, chances are we won't see much demand for additional rigs for at least another quarter or two. So anyone looking at these stocks today has plenty of time to evaluate them before their stock prices look too expensive.