What: Shares of Calumet Specialty Products Partners (NASDAQ:CLMT) rose 11.9% in June. While much of the gain wasn't attached to any real news event, the company did see some gains from the sale of its North Dakota refinery on June 28th. 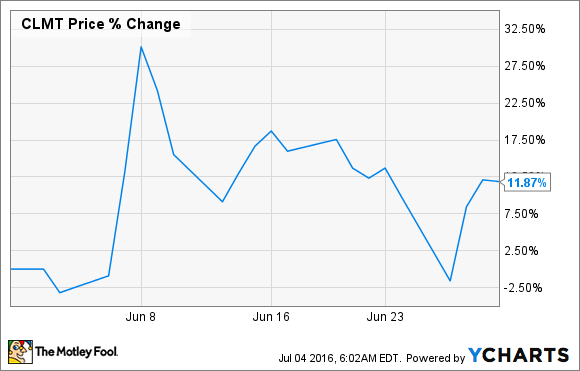 So what: In the case of this past month, there isn't really any way to explain the big price jump on June 7th. So instead let's focus on the one real business item that happened this month that will impact the company longer term. On June 28th, Calumet sold its 50% interest in its Dakota Prairie refinery for a cash consideration of $28.5 million. It also relieves Calumet of $66 million in debt obligations related to the facility.

Based on the facility's performance, though, it would seem that simply walking away would have been a plus. The idea of the refinery was to supply diesel to the booming Bakken shale region, but that boom turned to bust pretty fast and the facility has consistently been running at well below capacity and losing money every day it operated. It was another sign that Calumet's ventures into more traditional oil refining weren't panning out. This sale will allow the company to refocus on its core competency: producing specialty petroleum products. This has been the most consistent part of the business.

Now what: While getting out from under this less than successful joint venture project, Calumet is still a long ways off from becoming a company worth considering as an investment. The company is still overloaded with debt and it will take several quarters of strong results to trim that balance sheet down to a more respectable level. Until that happens, there is little reason why investors should be too excited about shares of Calumet Specialty Products Partners.