2016 was supposed to be the year all of that work Weatherford International (NYSE: WFT) has done to cut costs would finally pay off and start generating free cash flow and profits. However, the first two quarters of this year haven't done much to help that cause. As oil producers continue to cut spending, Weatherford International's results continue to deteriorate. Weatherford's management, though, seems to think this will be the pivotal change the company needs.

Let's take a quick look at Weatherford's results for the second quarter -- and why management is keeping its head up in a dour time.

It's hard to say anything nice about these results. Then again, Weatherford isn't the only one that has suffered this quarter from less and less oil service activity. Halliburton, Schlumbgerger, and Baker Hughes all reported heavy losses this past quarter. One major difference between Weatherford and the others is that the Weatherford only had about $250 million in asset writedowns and other charges, while the other three reported writedowns of more than a billion dollars.

If you want to glean something good from Weatherford's results, it's that the company's losses have been mitigated somewhat by cost cutting. In the fourth quarter of 2014, Weatherford's per share loss was also $0.63 per share, but at that time, the company had pulled down $3.7 billion in quarterly revenue. Today, the company is getting the same result on 62% less revenue.

This time last year, Weatherford was able to lean on revenues from its international business segments to help offset weakness from the brutal North American market. This quarter, though, that help from international segments evaporated as the rest of the world has begun the big spending cuts that started mostly in the U.S. 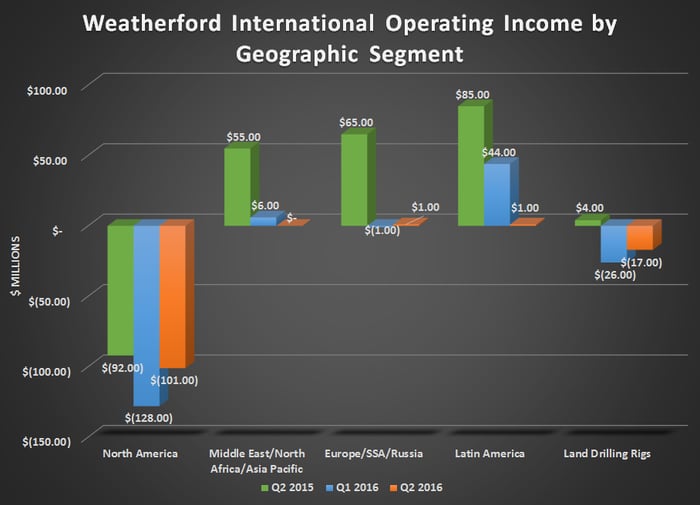 In 2014, Weatherford's management set forth a plan that would return the company to positive free cash flow. This was something the company hadn't achieved in years, and it had been taking an immense toll on the balance sheet. It looked as though things were turning the corner as the company generated a modest $24 million in free cash flow in 2015. 2016 was supposed to be an even better year as management was projecting $650 million in free cash flow as recently as last year, but in a more recent investor presentation, that was revised down to $400 million to $500 million.

So far, though, it doesn't look as though Weatherford will be able to meet those goals. Operational cash flow was negative in the second quarter, and so far this year, free cash flow stands at a negative $376 million. We can't completely rule out the possibility that Weatherford will meet its formerly stated goal, but it would have to generate close to $800 million. That will be an awfully monumental task.

Debt headed in the wrong direction

As a component of that free cash flow plan, the goal was to reduce the company's onerous debt load, but it appears that plan will have to take a back seat as well. In the second quarter, Weatherford's long term-debt position increased by $1.1 billion to $6.93 billion overall. On a net debt basis, not much changed because most of that long-term debt was used to pay off shorter-term debts. The overall effect of the deals also reduced its debt obligations over the next three years from $2.1 billion to $639 million, so it does give the company the opportunity to ride out the bad times a little longer.

From a numbers perspective, this was a lousy quarter. The one hopeful thing that came from the company's press release is that CEO Bernard Duroc-Danner thinks we have seen the worst of it, and that Weatherford is headed up from here:

The industry has now hit a bottom on both the activity and pricing fronts. Customers have begun to recognize that reliable, high quality products and services have been discounted below economic minimums and are at unsustainable levels. Our conversations with several customers support expectations that both activity and pricing levels will improve gradually over the next several quarters.

With our legacy issues now behind us, and a fundamentally transformed cost structure, Weatherford is positioned for the market recovery. As we look forward to a gradual improving macro environment, our core set of differentiated product lines and technology, along with a very disciplined approach and a much strengthened operational team, all support strong incremental operating income margin improvement and future free cash flow generation.

Our performance to come will reflect our transformation in all metrics.

Investors can only hope that this is the worst it gets for Weatherford, because the company can't really afford for the market to get much worse. Continued declines have wiped out almost any chance of meeting the company's goals for 2016, so we're just going to have to wait a bit longer to see if all that cost-cutting will finally have a positive impact on the company's overall results.