Teck Resrouces Ltd. (NYSE:TECK) and Companhia Siderurgica Nacional (NYSE:SID), or CSN for short, are both diversified foreign companies. Their makeups are a little different, which is important, but they also have very different geographic markets driving their top and bottom lines. And that could be the final determinant of which is the better buy.

Lots and lots of stuff

The first thing to note about Teck and CSN is their diversification. Teck, for example, is largely a miner. However, it mines for metallurgical coal, zinc, and copper. Coal accounts for about 30% of the company's cash operating profit, with zinc and copper roughly splitting the rest. That said, Teck is working on an oil-sands project that's scheduled to reach first production in 2017, with a swift ramp-up thereafter. That will increase its portfolio diversification from three to four commodities. 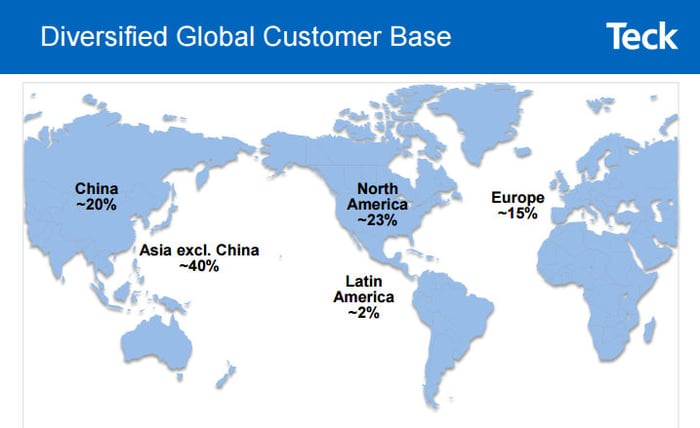 And while Teck is based in Canada, it has operations throughout the Americas, with mines in Canada, the United States, Peru, and Chile. Its production, meanwhile, is sold around the world. About 60% of its business comes from Asia (a third of that is from China), 25% from the Americas (predominantly North America), and the rest from Europe. In other words, Teck is a diversified miner in more ways than one. 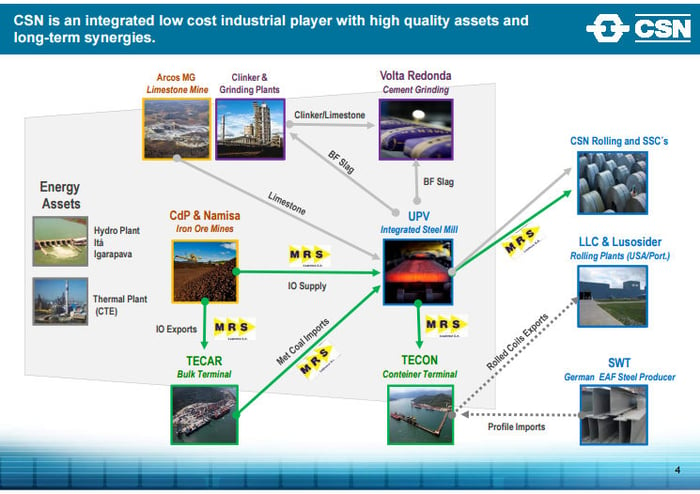 CSN, meanwhile, has operations spanning multiple businesses but is primarily a steel company. That business accounts for roughly 70% of the company's revenues. Mining, largely iron ore, accounts for just under 20%, with cement, energy, and logistics making up the remainder of the top line. The thing about these businesses is that they tie in to each other in key ways. Obviously, the iron ore and steel operations are a good pairing, but CSN's energy holdings help ensure access to power, key inputs into the cement business come from the steel operation's waste, and logistics is a vital part of selling all of its products to the world.

CSN is largely based in Brazil, but it has operations in Europe and the United States as well. The majority of foreign operations are steel mills, with the company's remaining assets mostly located in its home country. That said, in 2015 roughly half of CSN's revenue was derived from foreign markets.

Where do you invest?

With that as a backdrop, both Teck and CSN have been hit by the global commodity downturn that started in 2011. CSN has been directly affected by the steel market's malaise, with Teck feeling that pain through its met coal business and softness in the zinc and copper markets. That helps explain why, despite solid rallies this year, Teck's shares remain roughly 50% below their prices in 2011 while CSN's shares are off around 80% from their heyday. 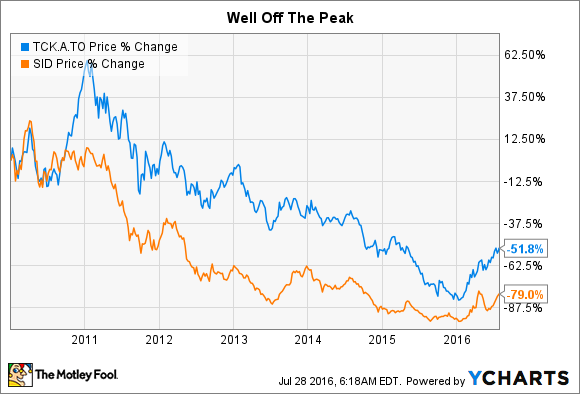 For investors seeking foreign investments that may still be relatively cheap, both companies are worth a deeper dive. That said, CSN's business, while globally diversified, is highly reliant on Brazil's economy. That country has been struggling of late, including very high-profile legal issues surrounding the country's former president Dilma Rouseff. Teck's future, meanwhile, is tied tightly into what happens in Asia.

In other words, when you look at CSN and Teck, you're placing bets on economic growth in Brazil and Asia, respectively. Yes, they both have diversified operations and sell to nations around the world, but their businesses will be heavily influenced by these two regions, and there's no way around that.

So if you're trying to figure out which is the better buy, Teck Resources Ltd. or Companhia Siderurgica Nacional, you'll want to take a moment to ponder your feelings about the prospects of Asia and Brazil. That will be a key determinant of whether you prefer Teck or CSN, despite their otherwise diversified businesses.

That said, Teck's prospects in Asia, which includes far more than just China, appear to have more appeal than CSN's reliance on a single country. And then there's the not so subtle fact that CSN has lost money if five of the last 10 quarters, including three of the last five. Teck has lost money in two of the last 10 quarters, which shows it has held up better through the commodity downturn. To be fair, those two quarters were within the last year, but the company has recently been highlighting positive trends in key markets--a fact that bodes well for the future--and the oil business it's building will further diversify the company's portfolio. All in, unless you feel strongly about a turnaround in Brazil, Teck looks like the better option today.