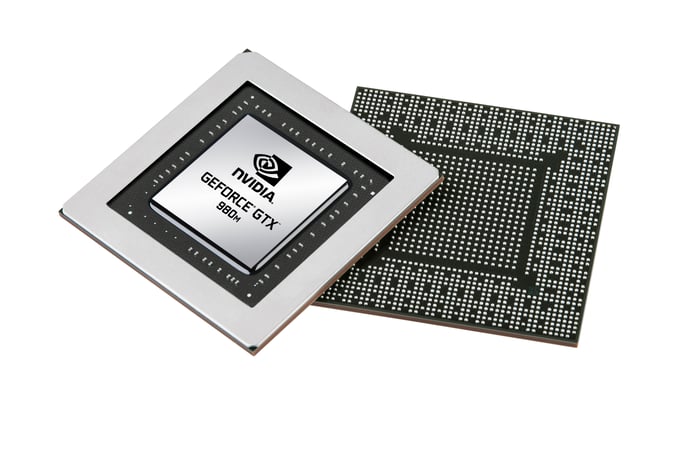 Since May, graphics specialist NVIDIA (NASDAQ:NVDA) has been rolling out new graphics processors aimed at gaming-oriented desktop personal computers. It began with the GeForce GTX 1070 and GeForce GTX 1080 announcements in May, and in July, the company announced the mid-range GeForce GTX 1060 and ultra high-end NVIDIA Titan X.

Although I suspect that the majority of high-end gaming discrete graphics processors go into desktop computers rather than laptops, NVIDIA has been quite bullish about the market for gaming notebooks. It has also been quite vocal in letting people know that its mobile-oriented graphics processors have gotten much closer to their desktop counterparts with recent product generations.

So it's not surprising that DigiTimes is saying that NVIDIA is planning to launch new notebook-oriented graphics processors based on its new Pascal architecture later this month.

Per the DigiTimes report, NVIDIA will announce the GeForce GTX 1060, GeForce GTX 1070, and GeForce GTX 1080 for notebooks at the Gamescom event between Aug. 17 and Aug. 21. The report also says that major notebook system vendors ASUSTek, Clevo, Gigabyte, and MSI will "showcase their latest products using the [graphics processing units]." Interestingly, these mobile-oriented Pascal-based graphics chips will actually have "equal performance" to their desktop-oriented siblings.

If that proves to be the case, then these new graphics processors should offer substantial performance enhancements relative to the company's prior generation gaming notebook-oriented products.

The personal computer market typically has seasonally stronger sales during the second half of the calendar year. This general market trend, coupled with new notebooks featuring these new graphics processors should mean that NVIDIA will enjoy a boost in its gaming notebook-oriented revenue in the coming quarters.

How important are notebooks to NVIDIA's gaming business?

NVIDIA doesn't give a breakdown of the sales of its graphics processors in notebooks versus desktops -- it merely reports gaming-related revenue. In order to get a sense of how important gaming notebook revenue actually is, it's worth taking a look at some data from the Steam Hardware Survey.

The numbers, though, seem to paint a pretty clear picture: There are far more gamers buying discrete graphics cards for desktop computers than there are gamers buying them for notebooks, though the numbers on the notebook side aren't trivial.

So the bottom line is that notebook gaming is an important area for NVIDIA to pursue, but desktop gaming is still substantially more important.