Coca-Cola (NYSE:KO) has been a favorite stock of Warren Buffett's for many years. In fact, Buffett-led Berkshire Hathaway (NYSE:BRK.A) (NYSE:BRK.B) owns a 9.2% stake in the beverage giant, worth about $17.4 billion -- it's the company's third-largest stock investment.

When Coca-Cola reported its second-quarter earnings, the market was disappointed thanks to lower-than-expected revenue and a reduced full-year forecast. Despite that, Coca-Cola still makes good sense as a long-term investment, and now the stock has gone on sale. 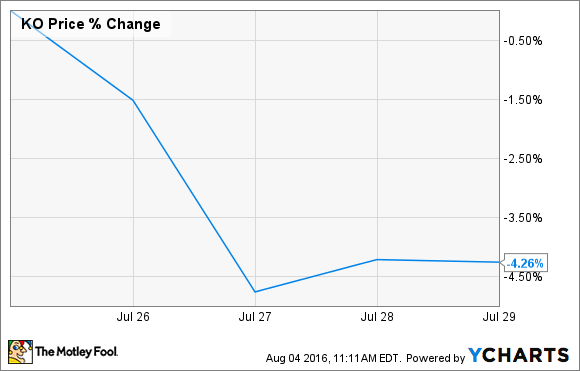 Aside from that, there were a few major items from the report that left the market disappointed. First, Coca-Cola's revenue dropped 5% year over year and missed analysts' expectations, with sales falling in every one of Coca-Cola's regional units except North America.

Perhaps even more significantly, Coca-Cola lowered its expectations for the rest of the year. The company cut its forecast of organic revenue growth to 3% from the previously stated range of 4%-5%. And, the company now expects full-year EPS in the range of $1.86 to $1.92 per share, versus analysts' previous expectations of $1.94.

But, think of the big picture

Was Coca-Cola's second-quarter report disappointing? Absolutely. However, that doesn't necessarily change anything about whether or not Coca-Cola is a solid long-term investment. Coca-Cola President and COO James Quincy had the following points to make when asked about the company's earnings report:

The overall point is that while the quarter was a bit disappointing, none of the issues are permanent, nor are they a sign of weakening in the company's core drivers of long-term growth.

We love when great businesses go on sale