With market share continuing to diminish, it's starting to look as if the competition is eating Boston Beer's lunch. Here's what investors need to know.

The Boston Beer Company (SAM -1.90%) just had a third quarter in a row of falling revenue, sales, and profits. That didn't phase anyone, though, as the company and investors glossed over the downtrend and shares have resumed rising. Should investors be worried? 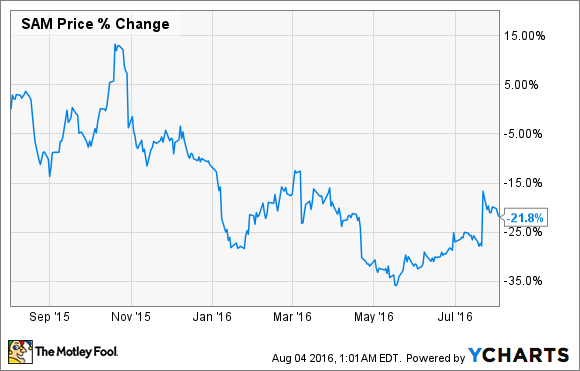 The last quarter in review

The last reported quarter for the Samuel Adams brewer saw declines in revenue, depletions, and profits. Revenue and profits fell 2.8% and 11%, respectively, year over year. This was due to depletions -- product that a distributor sells to consumers -- decreasing 4% from a year ago. This is on top of a 5% and 3% fall in depletions in the first quarter of this year and the fourth quarter of last year, respectively.

The bulk of Boston Beer's sales come from the Samuel Adams line of beer, and those have been declining. The company's Angry Orchard cider and Traveler beer brands were also down in the quarter, only partially offset by sales increases in Twisted Tea, Coney Island beer, and Truly Spiked and Sparkling.

Why has Boston Beer hit a rough patch? And what is it doing to rectify the situation?

The onset of craft brewing has been a game-changer for the beer industry. The number of regional brewers, microbrewers, and brewpubs has more than doubled in the past five years.

Boston Beer founder and Chairman Jim Koch have admitted that the explosion of small competition is indicative of changing consumer trends. Beer drinkers have been trending toward smaller brewers, many operating in hometowns and neighborhoods, in search of new and creative styles. While Boston Beer has been able to make a little hay off this trend with its own small start-ups and acquisitions, such as Coney Island beer and Travelers, it hasn't been enough to offset the losses from the bread-and-butter Sam Adams name.

Big non-craft beer companies have noticed the slew of new entrants into the market and have taken action. Consolidation and acquisitions have been the big news for the past few years now. Budweiser maker AB InBev (BUD -0.38%) is working through final merger arrangements with SABMiller and has also purchased eight smaller breweries in the past five years.

Constellation Brands (STZ -0.07%), best known for wine and spirits, entered the beer industry in 2013 with its purchase of Mexican beer Corona from AB InBev. Last year, the company made its own foray into the craft-brewing world when it bought San Diego-based Ballast Point.

Boston Beer seems stuck in the middle. Still clinging to its craft tradition, the company has chosen to primarily develop new offerings in-house through its Science and Alchemy division. Its most recent launch was a spiked sparkling water-flavored beverage. Sam Adams also recently released its Rebel IPA and Nitro projects, but none has been enough to restore the company to growth.

Koch attributes the lost market share to increased distribution from smaller players. However, he cites that distribution for small brewers has been tightening as of late and that it will eventually stall.

I disagree, as this assumption doesn't account for the trend of bigger brewers, such as AB InBev and Constellation, that have been buying out smaller ones and inserting them into their existing distribution networks. Add to that the continuing consolidation of the big brewers that could further drive control over distribution channels to the biggest fish and eat away at Boston Beer's market share.

It's time for the Boston Beer Company to rewrite its playbook. The company's internal efforts to generate growth aren't keeping up. I can understand the desire to stay true to the craft roots, but the company opted to play the perpetual growth game and went public. Shareholders demand profitable growth. It might be time to purchase a small rival brewer or two and plug them into the existing Sam Adams family.

With the recent decline in revenue and profits and corresponding rebound in stock price, the company now sits at a lofty valuation. The PEG ratio, a measure of value to expected future growth, currently sits at 4.4 when using a growth rate of 6% for the next five years. Anything over 1.0 is considered relatively expensive -- and possibly even overvalued.

Until the company makes changes, I think it faces continued headwinds and runs the risk of losing more market share and revenue to both larger and smaller rivals. At current valuations and with an anemic outlook, the Boston Beer Company looks overpriced to me. For investors already in for the long haul, expect more turbulence ahead.

Nicholas Rossolillo has no position in any stocks mentioned. The Motley Fool owns shares of and recommends Boston Beer. The Motley Fool recommends Anheuser-Busch InBev NV. We Fools may not all hold the same opinions, but we all believe that considering a diverse range of insights makes us better investors. The Motley Fool has a disclosure policy.