If you look at the precious-metals sector, you'll see a number of dividend increases coming up. For example, Newmont Mining (NYSE:NEM) is in prime position to double its dividend. But the gold-plated dividend king is really Royal Gold, Inc. (NASDAQ:RGLD). The next increase won't be as robust as Newmont's, but then there's a history behind both companies that makes Royal Gold stand out.

The first thing to examine when you ask yourself if Royal Gold will increase its dividend in 2017 is the broader precious-metals industry. This is a tough sector where results are driven by often volatile commodity prices. And that, at times, makes it hard to come up with the cash to pay dividends.

For example, Newmont trimmed its dividend several times as the price of gold crashed during the commodity downturn. It now pays just $0.025 per share each quarter. Fellow industry giant Barrick Gold (NYSE:GOLD) cut, too; the dividend there went from $0.75 a share per year in 2012 to $0.14 last year. The run rate is now just $0.08 a year per share based on the last dividend paid.

And that's why Royal Gold really stands out from the pack. Royal Gold has increased its disbursement annually for 15 consecutive years. If you like a consistent dividend, you won't get it from Barrick or Newmont. But you will get it from Royal Gold. And since Royal Gold was able to keep upping the payout through the downturn, there's no reason to believe it will stop the streak in 2017. 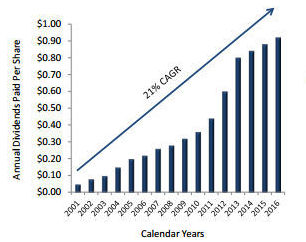 Increases on the way

That said, assuming the gold rally holds up, Royal Gold's dividend increase will likely be relatively modest. For example, Newmont mining's dividend is tied right to the price of gold. If gold holds steady above $1,300 an ounce, it's been above that level of late, Newmont will double its annual distribution to $0.20 a share. Royal Gold doesn't have a stated dividend policy like that, preferring to put in place increases that it believes are sustainable.

That, however, has led to a compound annual growth rate in the dividend of roughly 20% over the past decade and a half. The rate has been slower of late because of low gold and silver prices, but that makes sense if the goal is a sustainable dividend. So Royal Gold's 2017 dividend is likely to go up, but it won't double. That's just not what Royal Gold is about.

So Newmont's increase is tied to gold prices. Other than keeping the dividend streak alive, why would you expect Royal Gold to raise its dividend in 2017? The answer goes back to its business model. Royal Gold is a streaming and royalty company. That means it gives money up front to miners in exchange for the right to buy gold and silver at reduced rates in the future. This model keeps costs low and has allowed it to raise dividends where miners have been forced to cut. 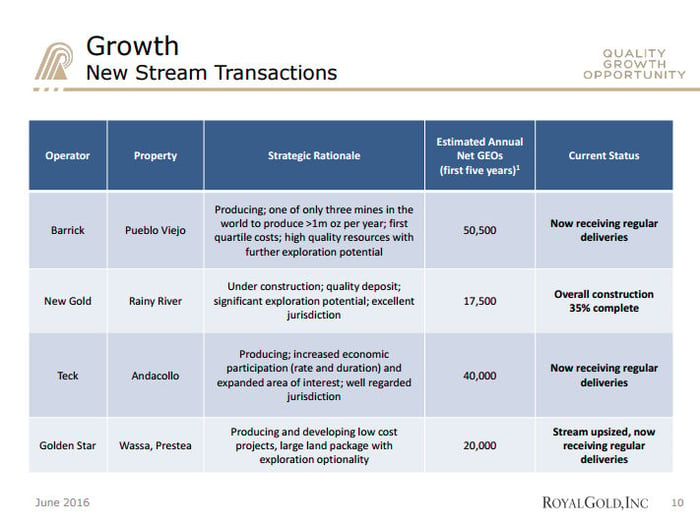 But there's more. During the commodity downturn, miners were desperate for cash to shore up their balance sheets. Royal Gold was happy to lend a helping hand, inking four deals last year, including an over $600 million agreement with Barrick Gold.

Royal Gold was able to increase its reserves by 20% last year. That backs the 30% year over year increase in the volume of gold it received in the fiscal third quarter. Revenues were up 25% year over year in the quarter, too. Royal Gold is doing pretty well right now and, based on these results, should be more than capable of hiking its payout in 2017.

So will Royal Gold raise its dividend in 2017? The answer looks like a resounding yes. On the one hand it will want to keep the long annual streak of dividend hikes alive. On the other, its investments during the precious metals downturn have set it up for solid results as commodity markets improve -- giving it more than ample financial resources to raise the dividend again next year. If you are looking for a precious metals company that pays a reliable dividend, Royal Gold's slow and steady approach is a great option.