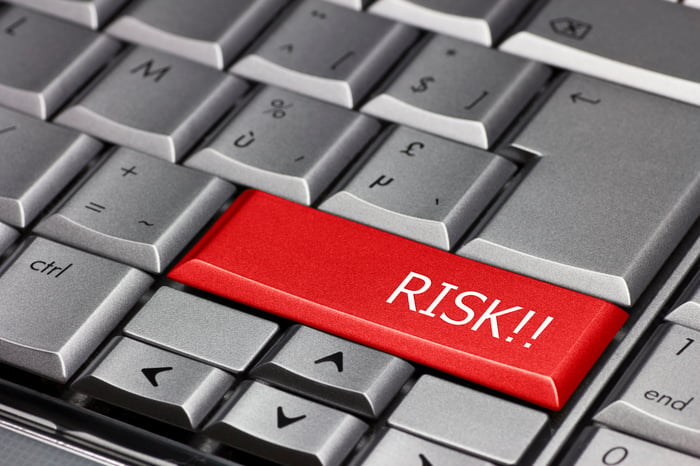 The past two years haven't been kind to InvenSense (NYSE:INVN), which makes motion sensors for smartphones, tablets, wearables, and other devices. Back in Aug. 2014, the stock peaked at $25 on surging sales and expectations that its sensors would be installed in the Apple (NASDAQ:AAPL) Watch.

But Apple eventually chose STMicroelectronics' (NYSE:STM) motion sensors for the Apple Watch, and slumping smartphone and tablet sales caused InvenSense's growth to hit a brick wall. As a result, the stock plunged to about $8 per share over the past two years. But after that steep drop, which brings the stock near its IPO price of $7.50 per share, can the fallen supplier be considered a contrarian buy? Let's examine InvenSense's growth, valuations, cash flow, and competition to decide.

How fast is InvenSense growing?

InvenSense's revenue fell 43% annually last quarter, compared to a 20% decline in the previous quarter and 59% growth in the prior-year quarter. Sales of new smartphones, like the iPhone 7, are expected to boost its sales in the second half of the year, but not by much. Analysts still expect InvenSense's full-year revenue to fall 24% this year.

InvenSense's non-GAAP earnings rose 6.5% to $0.49 per share in 2015, but that figure is expected to plummet 76% this year. Increased competition from STMicro, which is much bigger and has its own foundry, could force InvenSense to slash prices to stay competitive.

To make matters worse, InvenSense's massive decline still hasn't made the stock cheap. It trades at 27 times forward earnings, which is much higher than STMicro's forward price-to-earnings ratio of 18. Moreover, STMicro is actually expected to grow its earnings by 11% this year, while InvenSense is headed toward a full-year decline.

InvenSense is burning through a lot of cash. Its cash and equivalents fell 44% sequentially to $23 million last quarter. STMicro's cash pile, by comparison, stayed nearly flat sequentially at $1.68 billion last quarter. Therefore, it isn't surprising that STMicro has generated much stronger cash flows than InvenSense over the past five years. That's why STMicro pays a forward annual yield of 3.1%, while InvenSense has never paid a dividend. 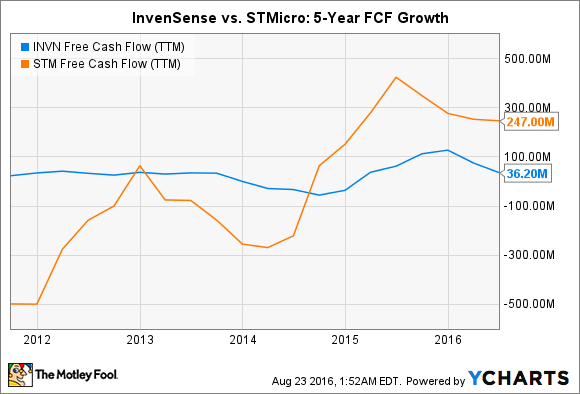 The biggest threat to InvenSense is STMicro. The chipmaker already pulled the Apple Watch away from InvenSense, and might do the same in iPhones and iPads in the future if it offers comparable sensors at lower prices. As fierce competition puts further pressure on smartphone margins, plenty of other OEMs could do the same.

InvenSense's main response to these threats is to diversify into new markets like virtual and augmented reality headsets, drones, cars, Internet of Things devices, and industrial machines. Unfortunately, STMicro is also expanding into many of the same markets. Furthermore Bosch is becoming a major player in VR headsets. The company's six- and nine-axis sensors are already used in Facebook's Oculus Rift and Razer's HDK 2 VR headsets. InvenSense's six-axis sensor can be found inside HTC's Vive, which is pricier than both headsets.

InvenSense is too risky to touch

InvenSense's plunging sales and earnings, weak cash flow, unattractive valuations, lack of competitive advantages, and its dependence on Apple make the stock too risky for investors. Investors who are looking for a stable play on gyroscopes and accelerometers should simply stick with STMicro instead.